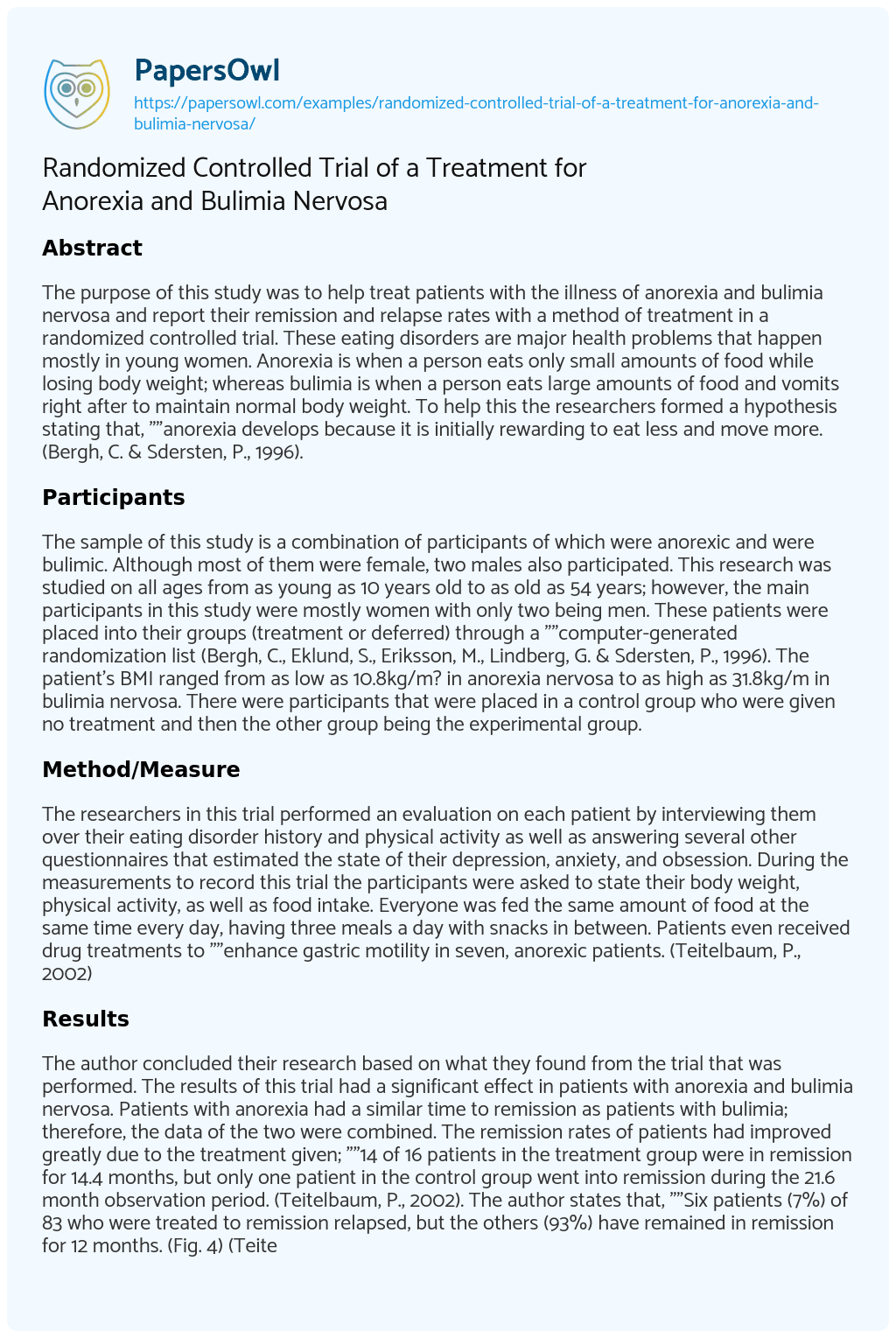 The purpose of this study was to help treat patients with the illness of anorexia and bulimia nervosa and report their remission and relapse rates with a method of treatment in a randomized controlled trial. These eating disorders are major health problems that happen mostly in young women. Anorexia is when a person eats only small amounts of food while losing body weight; whereas bulimia is when a person eats large amounts of food and vomits right after to maintain normal body weight. To help this the researchers formed a hypothesis stating that, “”anorexia develops because it is initially rewarding to eat less and move more. (Bergh, C. & Sdersten, P., 1996).

The sample of this study is a combination of participants of which were anorexic and were bulimic. Although most of them were female, two males also participated. This research was studied on all ages from as young as 10 years old to as old as 54 years; however, the main participants in this study were mostly women with only two being men. These patients were placed into their groups (treatment or deferred) through a “”computer-generated randomization list (Bergh, C., Eklund, S., Eriksson, M., Lindberg, G. & Sdersten, P., 1996). The patient’s BMI ranged from as low as 10.8kg/m? in anorexia nervosa to as high as 31.8kg/m in bulimia nervosa. There were participants that were placed in a control group who were given no treatment and then the other group being the experimental group.

The researchers in this trial performed an evaluation on each patient by interviewing them over their eating disorder history and physical activity as well as answering several other questionnaires that estimated the state of their depression, anxiety, and obsession. During the measurements to record this trial the participants were asked to state their body weight, physical activity, as well as food intake. Everyone was fed the same amount of food at the same time every day, having three meals a day with snacks in between. Patients even received drug treatments to “”enhance gastric motility in seven, anorexic patients. (Teitelbaum, P., 2002)

The author concluded their research based on what they found from the trial that was performed. The results of this trial had a significant effect in patients with anorexia and bulimia nervosa. Patients with anorexia had a similar time to remission as patients with bulimia; therefore, the data of the two were combined. The remission rates of patients had improved greatly due to the treatment given; “”14 of 16 patients in the treatment group were in remission for 14.4 months, but only one patient in the control group went into remission during the 21.6 month observation period. (Teitelbaum, P., 2002). The author states that, “”Six patients (7%) of 83 who were treated to remission relapsed, but the others (93%) have remained in remission for 12 months. (Fig. 4) (Teitelbaum, P., 2002). Although this trial was a success the author states that there should be improvement in the method and that this trial should be replicated to test the reliability of success.

In my opinion I believe that this method of treatment accurately provided an answer to the research question. The researchers studied the patients during their full process of going into the remission stage and showed accurate results with a large majority of their patients moving into remission and only a few relapsing during the first year of follow up. During remission, the patients with anorexia and bulimia could eat three meals each day which was improvement from when they started the trial. The authors conclusions were supported by the research findings. For example, the researchers predicted that 80% of the patients would enter remission through this method of treatment and the results showed that the estimated rate of remission was about 75%. I believe that the sampling of patients that the researchers chose was diverse in the sense that the age of the patients ranged from as young as ten years old to as old as fifty-four years old. As well as providing a chart with multiple characteristics of the patients such as, duration of disorder, BMI, number of previous treatments, etc.. Having these characteristics and information over the patients helps for the researchers to see what the patients have in common and what they need to look out for during their trial. Although, the researchers did not measure the menstruation of their patients during remission, 30 out of the 41 anorexic patients who went into remission began to menstruate after about 3 months. The author stated that although this trial showed outstanding results they were still able to further develop their method. For example, the author states, “”we need to determine whether one of our interventions is more important than another as well as whether our procedures should be modified(Bergh, C. & Sdersten, P., 1998). By stating this the author is implying that even though the success rates of this trial were high, there was still room to better improve and make this trial be more successful with patients achieving remission at faster rates and not relapse. The implications of this study show the process of selecting a sample of people that the researchers are interested in, which in this case being those who are selected are diagnosed with an eating disorder (anorexia or bulimia nervosa).

Randomized Controlled Trial of a Treatment for Anorexia and Bulimia Nervosa. (2019, Jun 19). Retrieved from https://papersowl.com/examples/randomized-controlled-trial-of-a-treatment-for-anorexia-and-bulimia-nervosa/