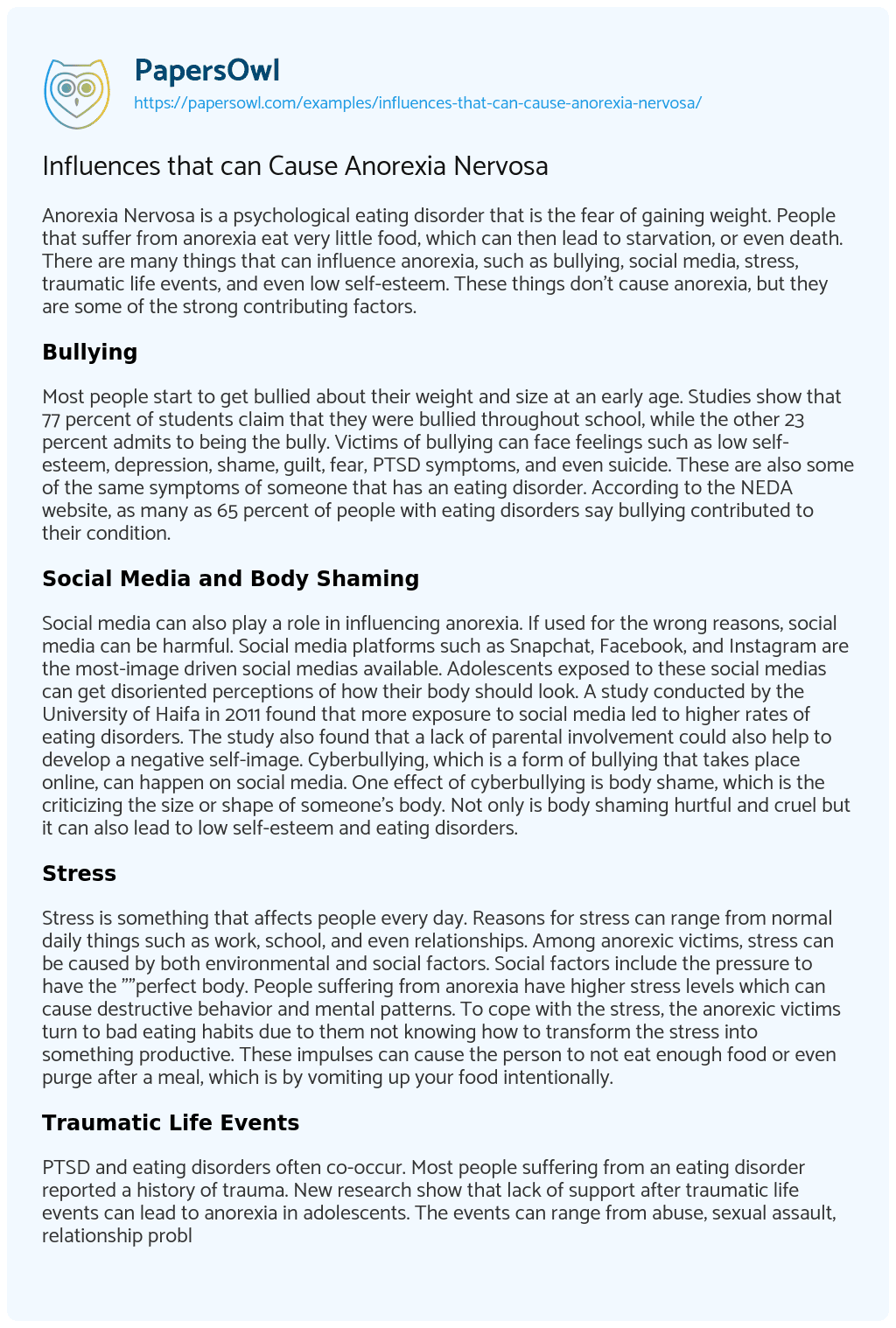 Anorexia Nervosa is a psychological eating disorder that is the fear of gaining weight. People that suffer from anorexia eat very little food, which can then lead to starvation, or even death. There are many things that can influence anorexia, such as bullying, social media, stress, traumatic life events, and even low self-esteem. These things don’t cause anorexia, but they are some of the strong contributing factors.

Most people start to get bullied about their weight and size at an early age. Studies show that 77 percent of students claim that they were bullied throughout school, while the other 23 percent admits to being the bully. Victims of bullying can face feelings such as low self-esteem, depression, shame, guilt, fear, PTSD symptoms, and even suicide. These are also some of the same symptoms of someone that has an eating disorder. According to the NEDA website, as many as 65 percent of people with eating disorders say bullying contributed to their condition.

Social media can also play a role in influencing anorexia. If used for the wrong reasons, social media can be harmful. Social media platforms such as Snapchat, Facebook, and Instagram are the most-image driven social medias available. Adolescents exposed to these social medias can get disoriented perceptions of how their body should look. A study conducted by the University of Haifa in 2011 found that more exposure to social media led to higher rates of eating disorders. The study also found that a lack of parental involvement could also help to develop a negative self-image. Cyberbullying, which is a form of bullying that takes place online, can happen on social media. One effect of cyberbullying is body shame, which is the criticizing the size or shape of someone’s body. Not only is body shaming hurtful and cruel but it can also lead to low self-esteem and eating disorders.

Stress is something that affects people every day. Reasons for stress can range from normal daily things such as work, school, and even relationships. Among anorexic victims, stress can be caused by both environmental and social factors. Social factors include the pressure to have the “”perfect body. People suffering from anorexia have higher stress levels which can cause destructive behavior and mental patterns. To cope with the stress, the anorexic victims turn to bad eating habits due to them not knowing how to transform the stress into something productive. These impulses can cause the person to not eat enough food or even purge after a meal, which is by vomiting up your food intentionally.

PTSD and eating disorders often co-occur. Most people suffering from an eating disorder reported a history of trauma. New research show that lack of support after traumatic life events can lead to anorexia in adolescents. The events can range from abuse, sexual assault, relationship problems, and even after moving or changing schools. Eating disorders are the victim’s way of coping with the pain or the emotional scarring. Helping the victim understand the source of the pain can help with eating disorder recovery.

Influences that can Cause Anorexia Nervosa. (2020, Mar 28). Retrieved from https://papersowl.com/examples/influences-that-can-cause-anorexia-nervosa/