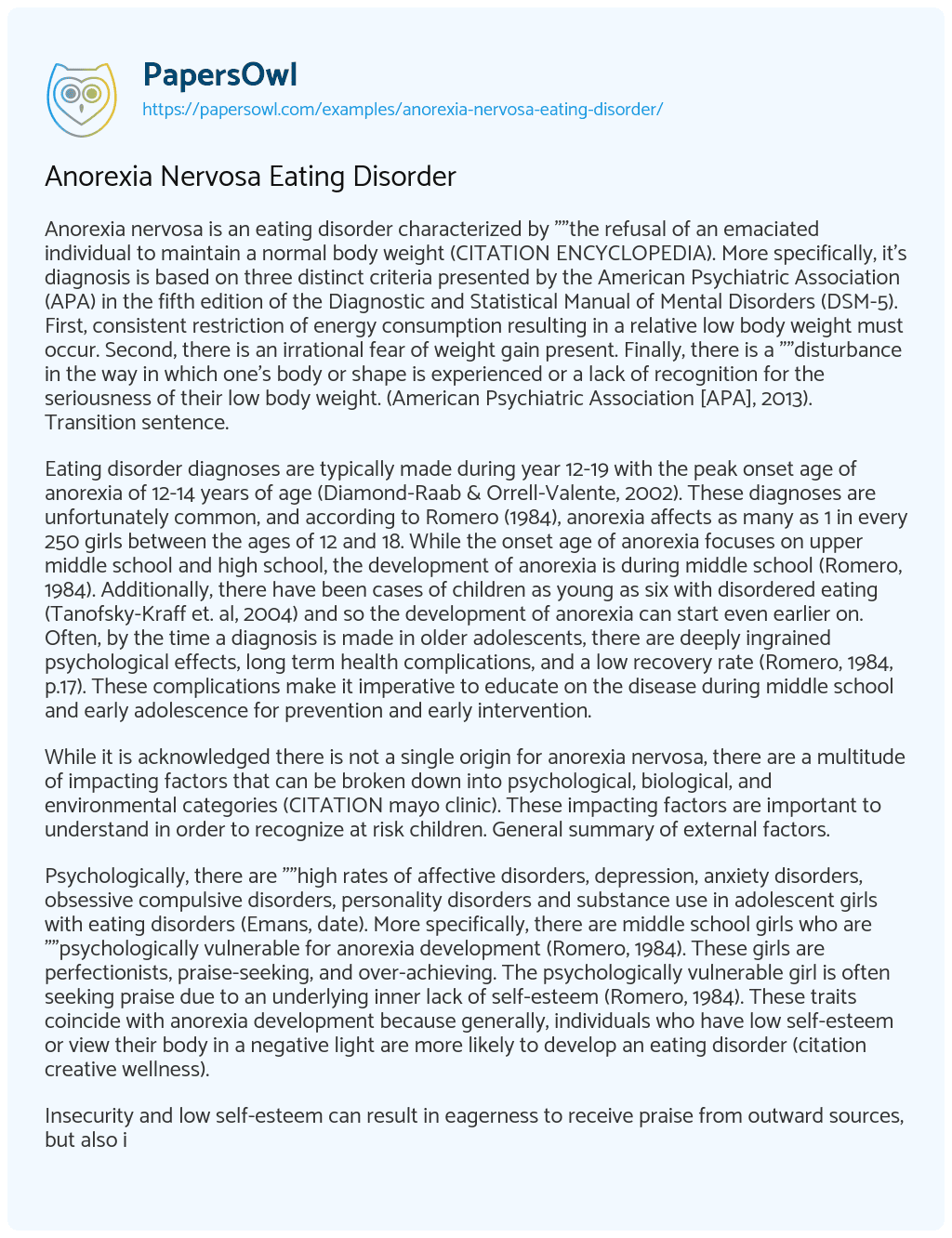 Anorexia nervosa is an eating disorder characterized by “”the refusal of an emaciated individual to maintain a normal body weight (CITATION ENCYCLOPEDIA). More specifically, it’s diagnosis is based on three distinct criteria presented by the American Psychiatric Association (APA) in the fifth edition of the Diagnostic and Statistical Manual of Mental Disorders (DSM-5). First, consistent restriction of energy consumption resulting in a relative low body weight must occur. Second, there is an irrational fear of weight gain present. Finally, there is a “”disturbance in the way in which one’s body or shape is experienced or a lack of recognition for the seriousness of their low body weight. (American Psychiatric Association [APA], 2013). Transition sentence.

Eating disorder diagnoses are typically made during year 12-19 with the peak onset age of anorexia of 12-14 years of age (Diamond-Raab & Orrell-Valente, 2002). These diagnoses are unfortunately common, and according to Romero (1984), anorexia affects as many as 1 in every 250 girls between the ages of 12 and 18. While the onset age of anorexia focuses on upper middle school and high school, the development of anorexia is during middle school (Romero, 1984). Additionally, there have been cases of children as young as six with disordered eating (Tanofsky-Kraff et. al, 2004) and so the development of anorexia can start even earlier on. Often, by the time a diagnosis is made in older adolescents, there are deeply ingrained psychological effects, long term health complications, and a low recovery rate (Romero, 1984, p.17). These complications make it imperative to educate on the disease during middle school and early adolescence for prevention and early intervention.

While it is acknowledged there is not a single origin for anorexia nervosa, there are a multitude of impacting factors that can be broken down into psychological, biological, and environmental categories (CITATION mayo clinic). These impacting factors are important to understand in order to recognize at risk children. General summary of external factors.

Psychologically, there are “”high rates of affective disorders, depression, anxiety disorders, obsessive compulsive disorders, personality disorders and substance use in adolescent girls with eating disorders (Emans, date). More specifically, there are middle school girls who are “”psychologically vulnerable for anorexia development (Romero, 1984). These girls are perfectionists, praise-seeking, and over-achieving. The psychologically vulnerable girl is often seeking praise due to an underlying inner lack of self-esteem (Romero, 1984). These traits coincide with anorexia development because generally, individuals who have low self-esteem or view their body in a negative light are more likely to develop an eating disorder (citation creative wellness).

Insecurity and low self-esteem can result in eagerness to receive praise from outward sources, but also in control-oriented and perfectionist tendencies (Emans, date). These tendencies can be seen anorexia patients as many view anorexia as patients’ form of control in their lives and often people with anorexia have an obsessive personality traits (Mayo Clinic). This trait is can be recognized in a patient’s intense, all-consuming focus on food and strict control over her energy consumptions. In fact, a study conducted by Thornton and Russell (date) found there were additional OCD diagnoses for 37% of patients with anorexia nervosa. This high comorbidity rate raised awareness for control’s role in anorexia nervosa development and the large impact of psychologic factors.

Many of these psychological risk traits can be traced back to the biology of patients. Biologically, while there is not a definite distinction of which genes cause a heighted risk for anorexia development, it is known that a person’s genetic makeup can influence the development of controlling, perfectionist, and anxious tendencies (mayo clinic). There is supporting evidence for anorexia’s genetic component, although further research needs to be done. A study on twins conducted between St George’s and the Maudsley Hospitals found 56.25% of the monozygotic (MZ) and 7% of the dizygotic (DZ) pairs concordant for anorexia nervosa, providing further evidence for the genetic and familial component of anorexia nervosa. (Hollad, et.al). Additionally, the risk of developing anorexia jumps 11-fold in people with anorexic family members (sciencemag) and having a first degree relative with anorexia increases one’s likelihood of developing anorexia (Mayo). While it can be argued that this increased likelihood is due to environmental influences, researchers at the University of Pittsburgh believe otherwise (sciencemag). Psychiatrist Walter Kay found a link between defective proteins in appetite systems and a varied region of chromosome 1 in anorexia patients (sciencemag). More research needs to be conducted on this link, however its discovery has inspired further curiosity about the genetic component of anorexia nervosa and an excitement for future genetic focused treatments (science mag).

While part of the family component of anorexia can be attributed to the genetics, there are still many familial and environmental influences on the development of anorexia. In adolescents, parents have a large influence on children’s behavior. Since children learn from direct observation, parental habits and thoughts surrounding food can picked up (citation). Additionally, parental opinions and comments on appearance can influence children’s self thoughts. Expand on how parents attitudes and all that influences it. Parental attitude and opinion hold great weight in … Attitudes towards foods picked up by children (white 2000).

Romero (1984) describes the families of anorexia patients as those with managerial or professional positions and high expectations. These parents emphasize physical appearances, and academic achievement (Romero 1984). Transition sentence.

Family culture may be tied into anorexia development. In the past, it was argued that anorexia was found mostly in upper-middle class, white girls due to Western culture’s emphasis on thinness (Romero, 1984). However, this belief has been challenged with the claim that those suffering in a White upper middle class culture have the financial ability to receive treatment and report their eating disorder cases, whereas other minority anorexia patients may be not be as fortunate and are therefore underrepresented (GET CITATION). There have been multiple studies revealing the prevalence of eating disorders in minority populations. In a study of 545 Hispanic, Native American, and White high school students, it was found that a both Native Americans and Hispanics had higher percentages of disturbed eating than non-Hispanic Whites (Smith & Krejci, 1991). The results of this study contradict the belief that anorexia is primarily experienced by white communities. Furthermore, a study conducted by Shaw, Ramirez, Trost, Randall, & Stice, (2004), examined the perceived differences in eating disorders between minority groups and Whites. Their results showed “” little support for the hypothesized ethnic differences in eating disturbances and suggested “”that ethnic minority groups have reached parity with Whites in this domain (Shaw et. al, 2004). These studies raise awareness to eating disorders prevalence in groups once assumed less affected.

While these studies were not anorexia specific and focused more generally on all eating disorders, they provide evidence that eating disorders do not discriminate in their victims. Educators should keep this in mind and remove cultural biases when looking for eating disorder cases in their classrooms. Further research on anorexia specific cultural trends should be done to check correlations between culture and anorexia nervosa. However, from an educational and professional view point is better to remove assumptions consider that all students could be at risk to avoid overlooking cases (book).

Beyond the environmental transition to a new school, there are additional physical developmental changes that place middle schoolers at risk for anorexia nervosa. Puberty occurs during early adolescence and causes weight gain and increased fat distributions. These bodily changes can make middle school girls more conscious and insecure about their bodies (Romero, 1984). These insecurities can develop into body dysmorphia, delusional thoughts, and anorexia nervosa. If not treated, the lack of energy consumption from anorexia nervosa can stunt physical maturation, force amenorrhea, cause patients to lose up to 50% of their original body weight, and eventually die of starvation (Romero. 1984). Adolescents with anorexia nervosa have a 12 times higher mortality rate than those who do not have the disease (NEDA), making the intervention and prevention of anorexia nervosa imperative in middle schools.

During this time, adolescents are also emotionally developing an identity and cognitively developing their values. Physical development affect identity development since physical appearance is the number one factor that influences global self-esteem (book). The of

Adolescents are more prone to fall under the weight of peer pressure. Social acceptance is prioritized over healthy choices (book). Peer influence is accentuated because during early adolescents “”preoccupation with how their peers see them can becoming all consuming (book).

No programs were effective in improving body image in boys and girls with 12-18 year olds BUT effective programs were conducted with 1213 year olds. https://www.sciencedirect.com/science/article/abs/pii/S1740144513000405

What are current or possible responses at the classroom level? At the school or system level?

“”The development of values, beliefs, and assumptions are transmitted through the schools’ curriculum, the teachers’ attitudes, and peer interactions (Ricciardelli & McCabe, 2001).

“”wellness groups in schools along with education of parents and teachers is crucial in identifying and preventing eating disorders in children and adolescents (Smolak, Harris, Levine, & Shisslak 2001; Russell-Mayhew, et al., 2008).

v.Whether or not these are effective

Rates of ED vary between schools; this is not explained by individual characteristics. (Bould)

“”Girls at schools with high proportions of female students, and students with highly educated parents, have higher odds of ED regardless of individual risk factor – “” On average a young woman, regardless of her own background, is more likely to develop an ED if she attends a school with a higher proportion of girls or a higher proportion of children of highly educated parents. (Bould)

Intervention that statistically has worked:

To date, it appears that the important elements of school-based programs include media skills, appreciation of body shapes and sizes, healthy eating at home and school, physical activity and exercise, outreach to parents and communities and referrals for services. (Emans)

Conclusion: going forward more research and flaws with information we have now