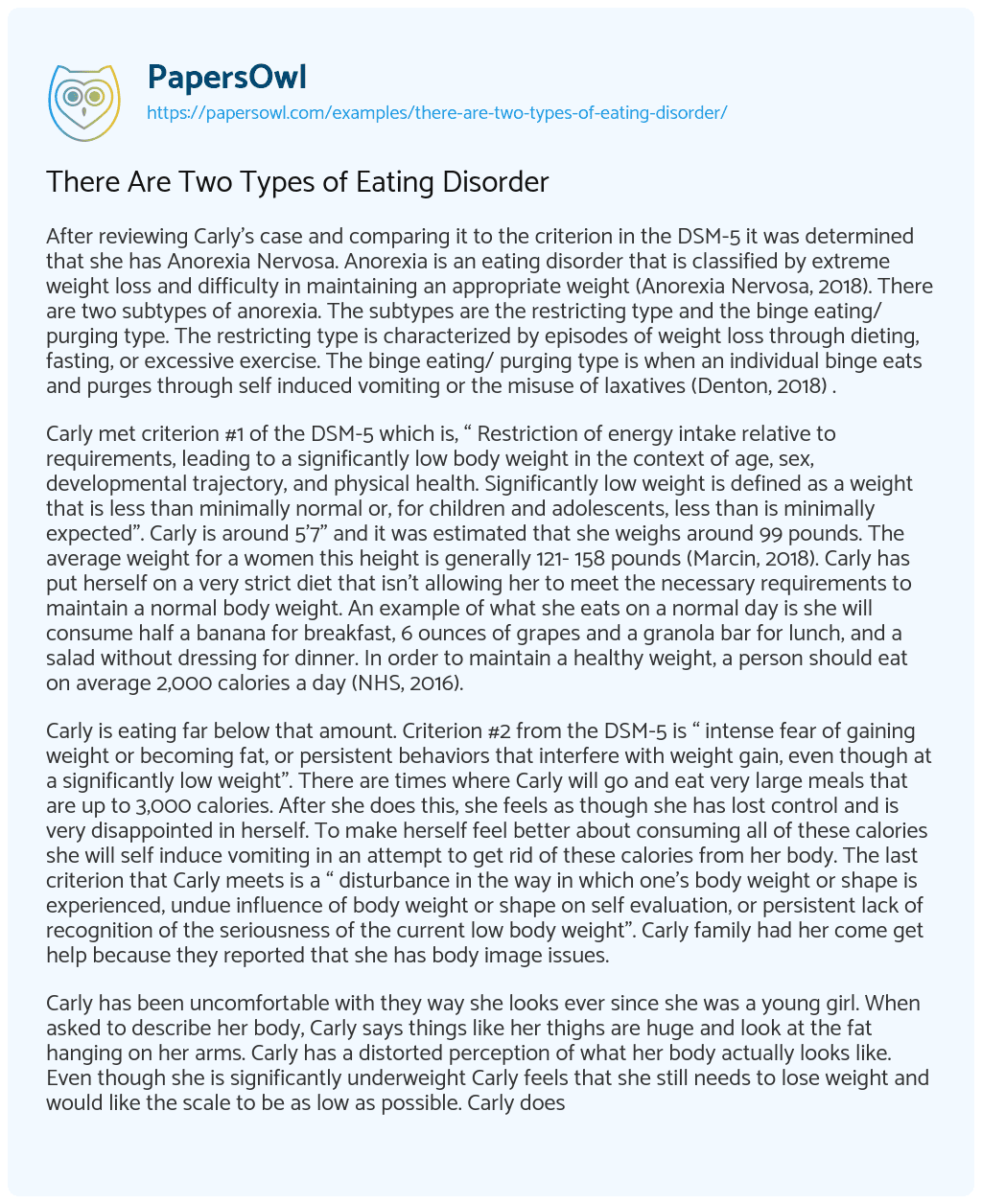 After reviewing Carly’s case and comparing it to the criterion in the DSM-5 it was determined that she has Anorexia Nervosa. Anorexia is an eating disorder that is classified by extreme weight loss and difficulty in maintaining an appropriate weight (Anorexia Nervosa, 2018). There are two subtypes of anorexia. The subtypes are the restricting type and the binge eating/ purging type. The restricting type is characterized by episodes of weight loss through dieting, fasting, or excessive exercise. The binge eating/ purging type is when an individual binge eats and purges through self induced vomiting or the misuse of laxatives (Denton, 2018) .

Carly met criterion #1 of the DSM-5 which is, “ Restriction of energy intake relative to requirements, leading to a significantly low body weight in the context of age, sex, developmental trajectory, and physical health. Significantly low weight is defined as a weight that is less than minimally normal or, for children and adolescents, less than is minimally expected”. Carly is around 5’7” and it was estimated that she weighs around 99 pounds. The average weight for a women this height is generally 121- 158 pounds (Marcin, 2018). Carly has put herself on a very strict diet that isn’t allowing her to meet the necessary requirements to maintain a normal body weight. An example of what she eats on a normal day is she will consume half a banana for breakfast, 6 ounces of grapes and a granola bar for lunch, and a salad without dressing for dinner. In order to maintain a healthy weight, a person should eat on average 2,000 calories a day (NHS, 2016).

Carly is eating far below that amount. Criterion #2 from the DSM-5 is “ intense fear of gaining weight or becoming fat, or persistent behaviors that interfere with weight gain, even though at a significantly low weight”. There are times where Carly will go and eat very large meals that are up to 3,000 calories. After she does this, she feels as though she has lost control and is very disappointed in herself. To make herself feel better about consuming all of these calories she will self induce vomiting in an attempt to get rid of these calories from her body. The last criterion that Carly meets is a “ disturbance in the way in which one’s body weight or shape is experienced, undue influence of body weight or shape on self evaluation, or persistent lack of recognition of the seriousness of the current low body weight”. Carly family had her come get help because they reported that she has body image issues.

Carly has been uncomfortable with they way she looks ever since she was a young girl. When asked to describe her body, Carly says things like her thighs are huge and look at the fat hanging on her arms. Carly has a distorted perception of what her body actually looks like. Even though she is significantly underweight Carly feels that she still needs to lose weight and would like the scale to be as low as possible. Carly does not realize how much danger she is in with her body weight being this low. She was reluctant and unhappy that her family made her come and does not want to seek anymore help after this initial session. Carly matches all of the criterion from the DSM-5 for anorexia nervosa (DSM, 2018, p .1).

During the process of diagnosing Carly with anorexia nervosa I considered that she could possibly have bulimia nervosa. These two eating disorders have some similarities that led me to believe that it could be bulimia. Both illnesses have people who are so fearful of gaining weight that they will do anything to keep it off even if it means putting their life in danger. What made me consider bulimia is that she does have episodes of purging after eating a large amount of food. The reason that I know Carly has anorexia and not bulimia is because anorexia is associated with being severely underweight and having distorted perceptions about ones actual body weight. Not everyone who suffers from bulimia is extremely underweight (Denton, 2018).

Anorexia nervosa is the most deadly mental health disorder. After 21 years, 51% of people are fully recovered, 21% of people are partially recovered, 10% are not recovered, and 16% are no longer alive due to the illness. The longer anorexia is undiagnosed the more dangerous that it becomes (Cleveland Clinic, 2012). Death from anorexia can be due to the medical problems that are associated with being dangerously underweight. Some of these problems are heart attacks, dangerous heart arrhythmias, and kidney failure. Another reason cause of death is due to suicide (Denton, 2018).

Treatments for eating disorders can be very challenging and there are lots of mixed feelings about how to treat them. If the patient is extremely underweight it is most important to do emergency procedures to restore their weight before anything else is done. One form of treatment for anorexia nervosa is the use of antidepressants or other medications to help. Antidepressants can be used to treat any anxiety or depression that may be worsening the symptoms of anorexia. Another option that can be used to treat anorexia is family therapy. People learn a lot of things from their family members and develop certain habits based off what orexia is cognitive behavioral therapy. This will help people with their automatic thoughts. It can help people change their automatic thoughts about themselves and their body. It also can help people with the purging type to delay impulses (Denton, 2018) . For example, when Carly eats a mass amount of calories and has the urge to purge. Her and her therapist can work on this urge and slowly delay it. Treatment is possible for anorexia but this is a high rate of relapse in those that are suffering from it (Cleveland Clinic, 2012). It is important that the individual is fully committed to getting better because recovering usually takes a very long time (Cleveland Clinic, 2012).

Anorexia is more prevalent in women than in men. It is very common that men are underdiagnosed with eating disorders. Eating disorders, like anorexia, are more commonly found in gay men. Anorexia is more commonly found in the age range of 16-20 year olds than any other age ranges (Denton, 2018). It is more prevalent in these ages because at these ages there is such a heavy emphasis on how you look. Girls at these age are extremely critical of each others appearances. Anorexia rates can also differ depending on the culture that the person is living in. It has been found that the rate of anorexia in african americans higher than ever before and is still rising (Miller, 1999). Another recent study has also shown that hispanic an asian american women are showing a greater insecurity with their body than ever before (Miller, 1999). These cultures could now be placing a greater emphasis on idea of being thin. The media also puts a great emphasis on being thin which creates a distorted perception of what a healthy individual should look like.

Based on all of this, I believe that Carly is suffering from Anorexia Nervosa. She has a restriction of energy intake relative to requirements which is leading to a weight that is well below normal, she has an intense fear of gaining weight, and has a disturbance in the way that one’s body is viewed. There are many paths that could be taken for treatment but one that I believe could be beneficial is if Carly participates in cognitive behavioral therapy. This could help give her the confidence to view herself in a more positive way. It could also help her with her impulse control during her episodes of purging. Before any of this it is most important to restore her weight to a healthy level.

There Are Two Types of Eating Disorder. (2021, Nov 21). Retrieved from https://papersowl.com/examples/there-are-two-types-of-eating-disorder/