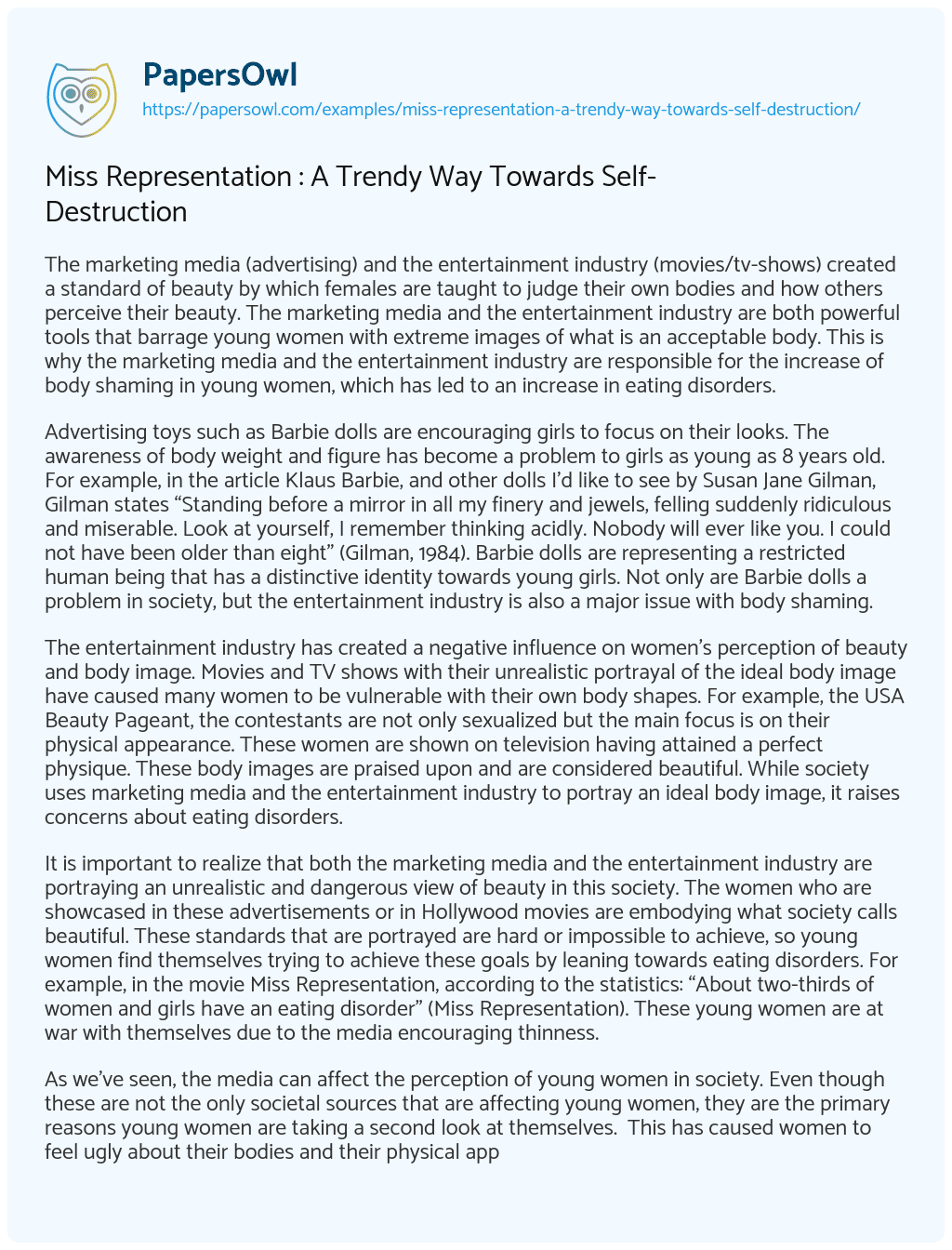 Advertising toys such as Barbie dolls are encouraging girls to focus on their looks. The awareness of body weight and figure has become a problem to girls as young as 8 years old. For example, in the article Klaus Barbie, and other dolls I’d like to see by Susan Jane Gilman, Gilman states “Standing before a mirror in all my finery and jewels, felling suddenly ridiculous and miserable. Look at yourself, I remember thinking acidly. Nobody will ever like you. I could not have been older than eight” (Gilman, 1984). Barbie dolls are representing a restricted human being that has a distinctive identity towards young girls. Not only are Barbie dolls a problem in society, but the entertainment industry is also a major issue with body shaming.

The entertainment industry has created a negative influence on women’s perception of beauty and body image. Movies and TV shows with their unrealistic portrayal of the ideal body image have caused many women to be vulnerable with their own body shapes. For example, the USA Beauty Pageant, the contestants are not only sexualized but the main focus is on their physical appearance. These women are shown on television having attained a perfect physique. These body images are praised upon and are considered beautiful. While society uses marketing media and the entertainment industry to portray an ideal body image, it raises concerns about eating disorders.

It is important to realize that both the marketing media and the entertainment industry are portraying an unrealistic and dangerous view of beauty in this society. The women who are showcased in these advertisements or in Hollywood movies are embodying what society calls beautiful. These standards that are portrayed are hard or impossible to achieve, so young women find themselves trying to achieve these goals by leaning towards eating disorders. For example, in the movie Miss Representation, according to the statistics: “About two-thirds of women and girls have an eating disorder” (Miss Representation). These young women are at war with themselves due to the media encouraging thinness.

As we’ve seen, the media can affect the perception of young women in society. Even though these are not the only societal sources that are affecting young women, they are the primary reasons young women are taking a second look at themselves.  This has caused women to feel ugly about their bodies and their physical appearance. Women who turn to the media will try to attain a weight size that will cause them to do harm to their bodies. This leads to negative effects on their own bodies, such as eating disorders and self-harm. The media should portray beauty with all types of bodies, such as fat, thin, tall, short, dark skin, light skin, etc. That being any shape or size, these young women should be happy with who they are. At the end of the day, our body image will always be a part of who we are, it defines our beauty, and differentiates us from each other with our unique features.

Miss Representation : A Trendy Way Towards Self-Destruction. (2021, May 11). Retrieved from https://papersowl.com/examples/miss-representation-a-trendy-way-towards-self-destruction/

Sexism and the Stereotypical Representation of Women in the Nigerian Media

Does our World Need Standards of Beauty or not