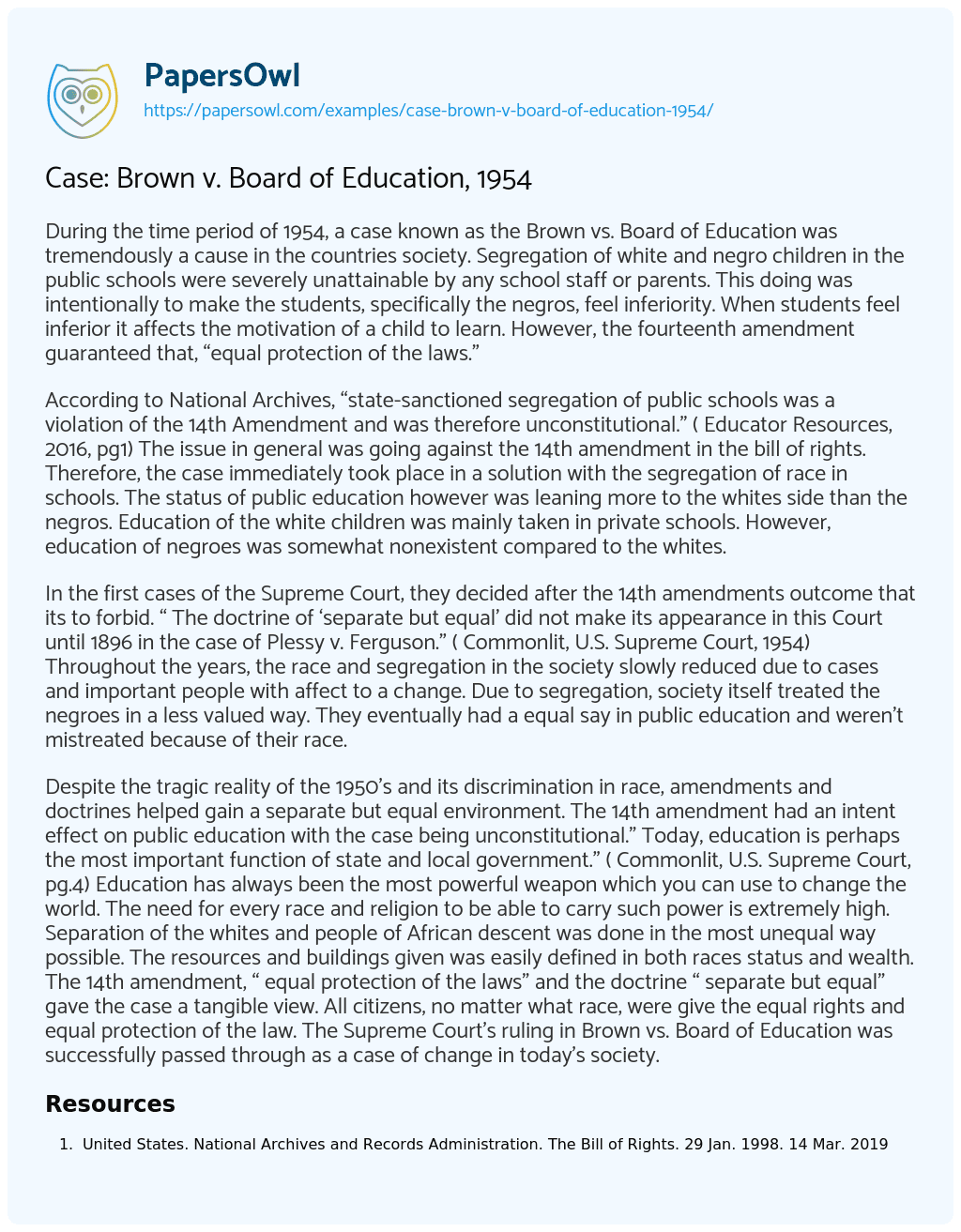 During the time period of 1954, a case known as the Brown vs. Board of Education was tremendously a cause in the countries society. Segregation of white and negro children in the public schools were severely unattainable by any school staff or parents. This doing was intentionally to make the students, specifically the negros, feel inferiority. When students feel inferior it affects the motivation of a child to learn. However, the fourteenth amendment guaranteed that, “equal protection of the laws.”

According to National Archives, “state-sanctioned segregation of public schools was a violation of the 14th Amendment and was therefore unconstitutional.” ( Educator Resources, 2016, pg1) The issue in general was going against the 14th amendment in the bill of rights. Therefore, the case immediately took place in a solution with the segregation of race in schools. The status of public education however was leaning more to the whites side than the negros. Education of the white children was mainly taken in private schools. However, education of negroes was somewhat nonexistent compared to the whites.

In the first cases of the Supreme Court, they decided after the 14th amendments outcome that its to forbid. “ The doctrine of ‘separate but equal’ did not make its appearance in this Court until 1896 in the case of Plessy v. Ferguson.” ( Commonlit, U.S. Supreme Court, 1954) Throughout the years, the race and segregation in the society slowly reduced due to cases and important people with affect to a change. Due to segregation, society itself treated the negroes in a less valued way. They eventually had a equal say in public education and weren’t mistreated because of their race.

Despite the tragic reality of the 1950’s and its discrimination in race, amendments and doctrines helped gain a separate but equal environment. The 14th amendment had an intent effect on public education with the case being unconstitutional.” Today, education is perhaps the most important function of state and local government.” ( Commonlit, U.S. Supreme Court, pg.4) Education has always been the most powerful weapon which you can use to change the world. The need for every race and religion to be able to carry such power is extremely high.
Separation of the whites and people of African descent was done in the most unequal way possible. The resources and buildings given was easily defined in both races status and wealth. The 14th amendment, “ equal protection of the laws” and the doctrine “ separate but equal” gave the case a tangible view. All citizens, no matter what race, were give the equal rights and equal protection of the law. The Supreme Court’s ruling in Brown vs. Board of Education was successfully passed through as a case of change in today’s society.

Brown V. Board of Education and Civil Rights