Life and Love in Delirium Novel 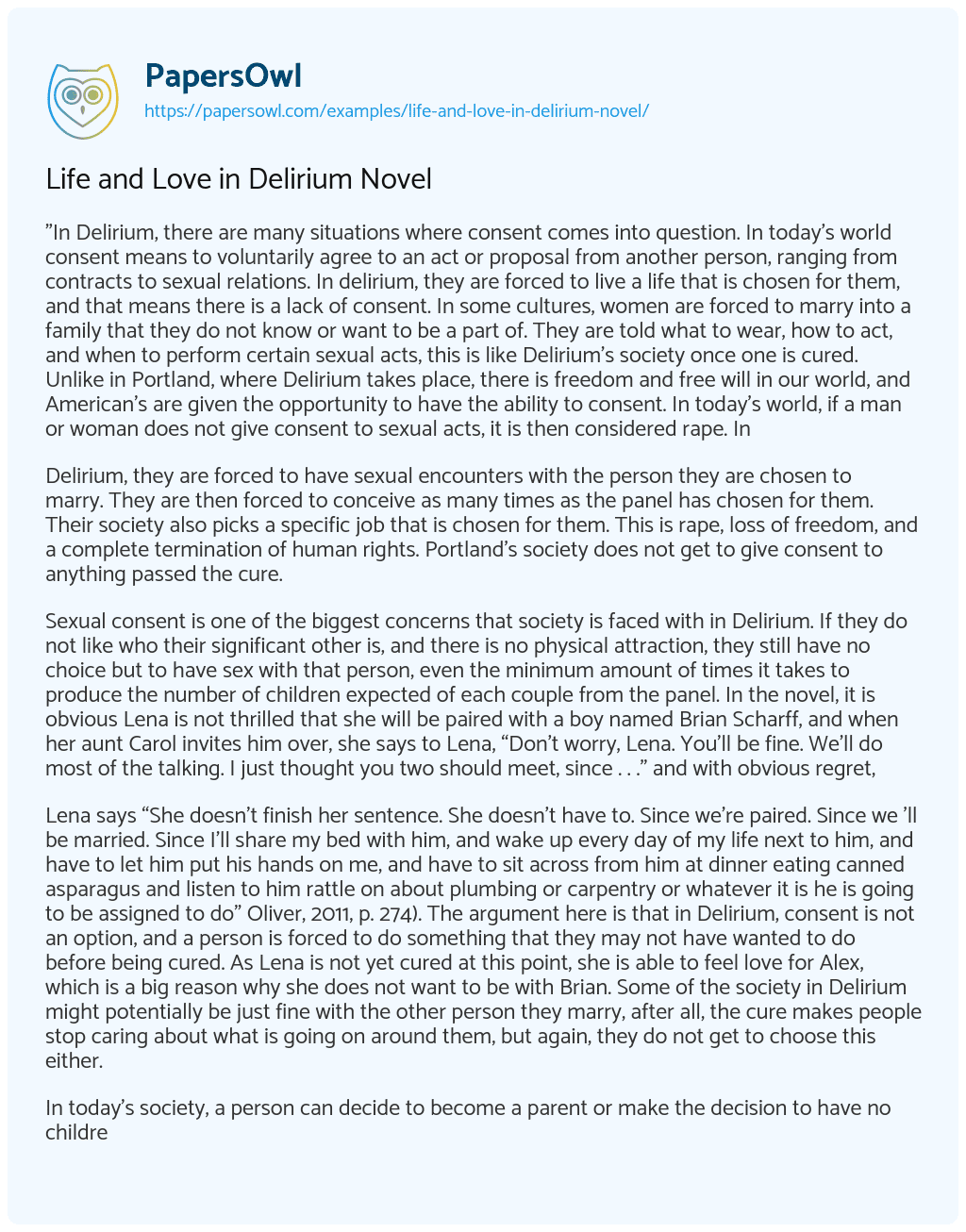 “In Delirium, there are many situations where consent comes into question. In today’s world consent means to voluntarily agree to an act or proposal from another person, ranging from contracts to sexual relations. In delirium, they are forced to live a life that is chosen for them, and that means there is a lack of consent. In some cultures, women are forced to marry into a family that they do not know or want to be a part of. They are told what to wear, how to act, and when to perform certain sexual acts, this is like Delirium’s society once one is cured. Unlike in Portland, where Delirium takes place, there is freedom and free will in our world, and American’s are given the opportunity to have the ability to consent. In today’s world, if a man or woman does not give consent to sexual acts, it is then considered rape. In

Delirium, they are forced to have sexual encounters with the person they are chosen to marry. They are then forced to conceive as many times as the panel has chosen for them. Their society also picks a specific job that is chosen for them. This is rape, loss of freedom, and a complete termination of human rights. Portland’s society does not get to give consent to anything passed the cure.

Sexual consent is one of the biggest concerns that society is faced with in Delirium. If they do not like who their significant other is, and there is no physical attraction, they still have no choice but to have sex with that person, even the minimum amount of times it takes to produce the number of children expected of each couple from the panel. In the novel, it is obvious Lena is not thrilled that she will be paired with a boy named Brian Scharff, and when her aunt Carol invites him over, she says to Lena, “Don’t worry, Lena. You’ll be fine. We’ll do most of the talking. I just thought you two should meet, since . . .” and with obvious regret,

Lena says “She doesn’t finish her sentence. She doesn’t have to. Since we’re paired. Since we ’ll be married. Since I’ll share my bed with him, and wake up every day of my life next to him, and have to let him put his hands on me, and have to sit across from him at dinner eating canned asparagus and listen to him rattle on about plumbing or carpentry or whatever it is he is going to be assigned to do” Oliver, 2011, p. 274). The argument here is that in Delirium, consent is not an option, and a person is forced to do something that they may not have wanted to do before being cured. As Lena is not yet cured at this point, she is able to feel love for Alex, which is a big reason why she does not want to be with Brian. Some of the society in Delirium might potentially be just fine with the other person they marry, after all, the cure makes people stop caring about what is going on around them, but again, they do not get to choose this either.

In today’s society, a person can decide to become a parent or make the decision to have no children at all. There is also the choice to adopt or put a child up for adoption. In the novel, they do not have the free will to be with someone they choose, even based on their sexuality. A man and a woman are paired together by the panel even if one or both parties might be gay.

“Usually the evaluators generate a list of four or five approved matches, and you are allowed to pick among them” says Lena (Oliver, 2011, p.297). Once someone is cured, the ability to choose whether they want to be with a person physically and emotionally is no longer valid, instead, their significant other could be someone that would absolutely despise them before the cure.

This is like being raped today in our society, except the government in Portland would be drugging both parties with the cure. In today’s world, once the drug is in someone’s system, their ability to make the right decisions for themselves disappears. Someone cannot simply make decisions based on their morals, values, and code of ethics at this point. This is also what in our society knows as forced marriage, an article explains that victims in America deal with the same types of emotions as the society in Portland, this article states that “What we also heard over and over again was that victims of forced marriage are reluctant to come forward. They ’re afraid for themselves. They’re afraid for their families. They don’t know what kind of services they can access, and they don’t know what kind of repercussions (they might face)” (Anderson, 2012). This shows the fear that Delirium’s society faces when going against the rules and regulations set in place, especially when it comes to marriage. When having no emotions towards sexual acts, they also have other incidents where there is potential to be how they would have been before the cure.

In today’s world as Americans, forcing sex on someone who does not give consent is considered rape. There are different types of rape, but what they all have in common is that one person of the party does not agree to the act proposed on them. In this case, the

Government is the perpetrator here, because, in Delirium, both parties are forced into a sexual relationship with a person they did not choose, forced to conceive and become parents, and no longer can detect if they would have had certain reactions to this. According to Rape, Abuse &

Incest National Network (RAINN), “A perpetrator may intentionally drug a victim, resulting in a situation where it is easy to manipulate the circumstances and commit an assault. Perpetrators use a variety of substances to incapacitate a victim” (RAINN). This is a corrupt society. Asking for justice is nearly impossible to do when someone is cured due to lack of feelings that may have been alarming to them before the cure.

Society today, a person can decide to become a parent or make the decision to have no children at all. There is also the choice to adopt or put a child up for adoption. Another alternative a woman has would be to have an abortion. If someone feels like they are not fit to be a parent, then the choice to abort becomes relevant. In the novel, they do not have these choices, their only option is to conceive as many times as the panel has ordered them to do.

After being cured, the feeling of love disappears, so when they have children, they cannot feel that emotion towards them. Imagine being a parent to a child or children and not being able to show them love. How much can one care about their child without love? As a parent, that is the main reason there is a bond with the child. Lena’s mother was not cured and showed true love that the role of a mother would, while being criticized at the same time. In the novel, Lena says

“I remember how much she loved to sing to us as she bounced me in the water at the beach off Eastern Prom. I didn’t know how strange this was at the time. Other mothers teach their children to swim, other mothers bounce their babies in the water, and apply sunscreen to make sure, their babies don’t burn and do all the things that a mother is supposed to do, as outlined in the Parenting section of The Book of Shhh” (Oliver, 2011, p. 103). This is another result of the loss of freedom.

In the novel, what is known as being cured is nothing more than the government having full control. The loss of human rights is overwhelming and the thought of losing who a person is up to the point of being cured is very real to Delirium’s society. Once they have become cured they are incapable of making their own decisions based on what they would have wanted beforehand. This is a loss of freedom and human rights. They can no longer freely go get a job and work wherever they please, the choice to stay single is no longer there, the option to not have children can no longer be, and the freedom to express sexuality has now been taken away as they will now be paired with the opposite sex. Freedom is not, by any means, given to

Delirium’s society. Freedom is being able to make decisions based on what they feel is right for them. It is said that “The evolution of free will began when living things began to make choices. The difference between plants and animals illustrates an important early step. Plants do n’t change their location and don’t need brains to help them decide where to go. Animals do. Free will is an advanced form of the simple process of controlling oneself, called agency” (Baumeister, 2013). Regarding Delirium, the cure is nothing more than the government destroying all that is left of common decision skills given to people.”

Life and Love in Delirium Novel. (2021, Apr 29). Retrieved from https://papersowl.com/examples/life-and-love-in-delirium-novel/

Macklemore, Singer and Songwriter, in his Song “Same Love”

“Love, Love, Love that is the Soul of Genius” – Mozart

Is Love Stronger than Hate