“Love, Love, Love that is the Soul of Genius” – Mozart 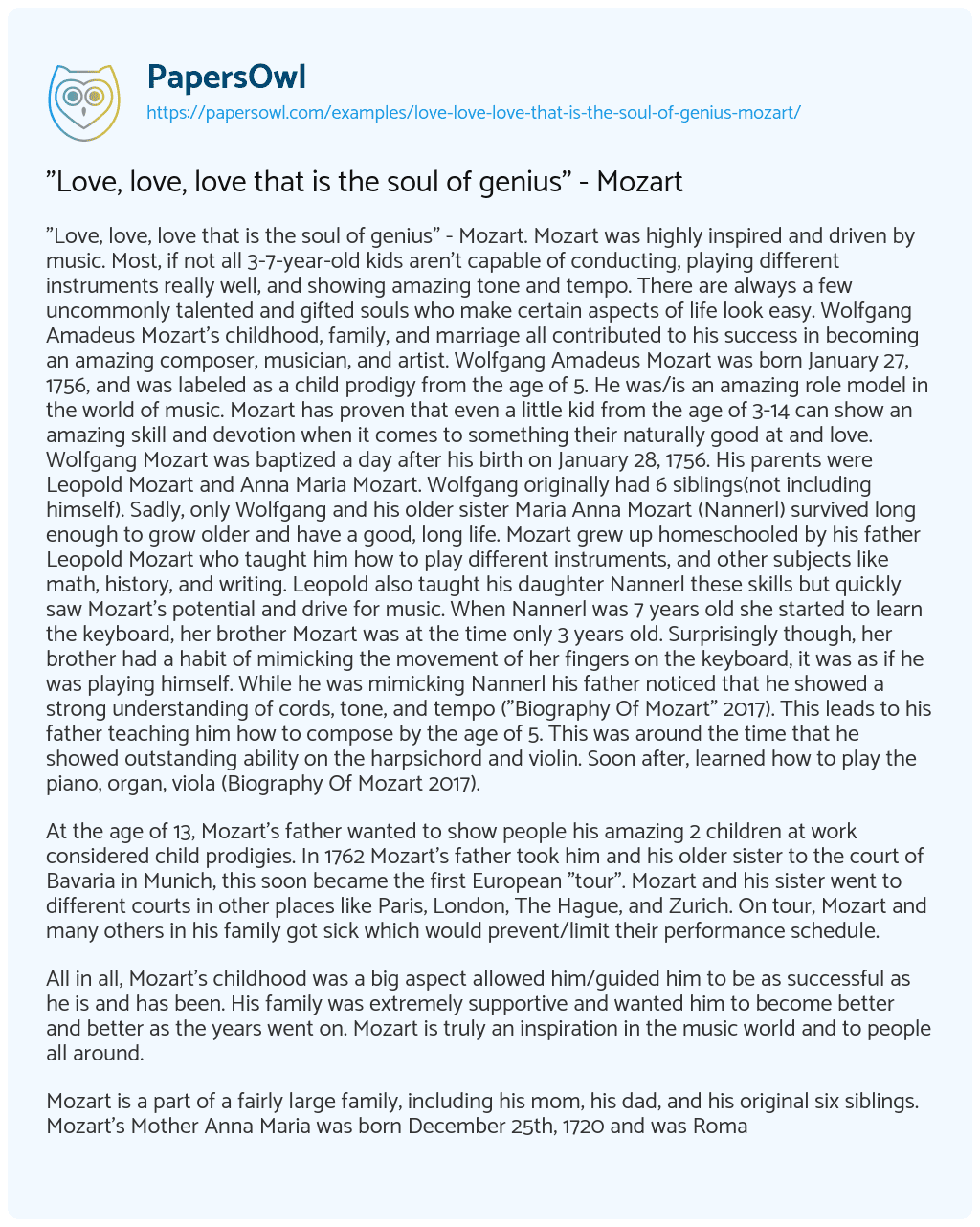 “Love, love, love that is the soul of genius” – Mozart. Mozart was highly inspired and driven by music. Most, if not all 3-7-year-old kids aren’t capable of conducting, playing different instruments really well, and showing amazing tone and tempo. There are always a few uncommonly talented and gifted souls who make certain aspects of life look easy. Wolfgang Amadeus Mozart’s childhood, family, and marriage all contributed to his success in becoming an amazing composer, musician, and artist. Wolfgang Amadeus Mozart was born January 27, 1756, and was labeled as a child prodigy from the age of 5. He was/is an amazing role model in the world of music. Mozart has proven that even a little kid from the age of 3-14 can show an amazing skill and devotion when it comes to something their naturally good at and love. Wolfgang Mozart was baptized a day after his birth on January 28, 1756. His parents were Leopold Mozart and Anna Maria Mozart. Wolfgang originally had 6 siblings(not including himself). Sadly, only Wolfgang and his older sister Maria Anna Mozart (Nannerl) survived long enough to grow older and have a good, long life. Mozart grew up homeschooled by his father Leopold Mozart who taught him how to play different instruments, and other subjects like math, history, and writing. Leopold also taught his daughter Nannerl these skills but quickly saw Mozart’s potential and drive for music. When Nannerl was 7 years old she started to learn the keyboard, her brother Mozart was at the time only 3 years old. Surprisingly though, her brother had a habit of mimicking the movement of her fingers on the keyboard, it was as if he was playing himself. While he was mimicking Nannerl his father noticed that he showed a strong understanding of cords, tone, and tempo (“Biography Of Mozart” 2017). This leads to his father teaching him how to compose by the age of 5. This was around the time that he showed outstanding ability on the harpsichord and violin. Soon after, learned how to play the piano, organ, viola (Biography Of Mozart 2017).

At the age of 13, Mozart’s father wanted to show people his amazing 2 children at work considered child prodigies. In 1762 Mozart’s father took him and his older sister to the court of Bavaria in Munich, this soon became the first European “tour”. Mozart and his sister went to different courts in other places like Paris, London, The Hague, and Zurich. On tour, Mozart and many others in his family got sick which would prevent/limit their performance schedule.

All in all, Mozart’s childhood was a big aspect allowed him/guided him to be as successful as he is and has been. His family was extremely supportive and wanted him to become better and better as the years went on. Mozart is truly an inspiration in the music world and to people all around.

Mozart is a part of a fairly large family, including his mom, his dad, and his original six siblings. Mozart’s Mother Anna Maria was born December 25th, 1720 and was Roman / Australian. Anna has two sisters Maria Rosina Erentrudis Pertl, and Clara Elisabeth Rosina Pertl. Maria was born in 1719 but only lived to 1728 (9 years old). Clara, on the other hand, was born 1713 and died at birth. Sadly the cause of death for both of the sisters is unknown. Anna Was born in St.Gilgen Australia and only ever had one spouse, Leopold Mozart.

Mozart’s father was born November 14, 1719, in Augsburg Germany. He was known for his talent in being a composer, conductor, teacher, and violinist. Leopold wrote and published a violin textbook called Versuch einer gr??ndlichen Violinschule (Attempt of a thorough violin school) on the same year Mozart was born (Biography of Mozart 2018). When his son Wolfgang and daughter Maria who went by Nannerl was born Leopold was devoted to teaching both children (Biography of Mozart 2018). Leopold worked hard to show the world how talented his children where.

Mozart was originally one of seven siblings. However, the only two children to survive to live a long enjoyable life were Wolfgang and Maria; otherwise, known as Nannerl. Nannerl was born July 30, 1751, and was given the full name Maria Anna Walburga Ignatia Mozart(Plotkin 2012). Nannerl was 5 years older than Mozart and was also devoted to her love for music. Her ‘fame’ only lasted for a certain amount of time before she was just known as someone who followed Mozart around and just happened to be his sister. Unfortunately, though, her career in music came to an end when she reached the age of 18(The Lost Genius Of Mozart’s Sister 2018).

In his mid-20s Wolfgang fell in love with Constanze Weber and decided to marry her at the St. Stephen’s Cathedral in Vienna on August 4th, 1782 (The Marriage Of Mozart: A Truly Opera Worthy Tale 2018). However, Wolfgang’s father Leopold did not approve of him marrying Constanze or anyone else from the Weber family.

All in all, Wolfgang Amadeus Mozart lived a long(ish) and enjoyable life. He died at the age of 35 but was still able to show the world his amazing talent, get married, have children, and live a happy life. Wolfgang was truly an inspiration to everyone he performed for and has managed to still be an inspiration to the people he will never get to meet or perform for but has still helped.

"Love, love, love that is the soul of genius" - Mozart. (2019, Oct 23). Retrieved from https://papersowl.com/examples/love-love-love-that-is-the-soul-of-genius-mozart/

Mozart’s Passion and Love for Music

Mozart and his Life

Why is Mozart so Influential?