Why are Men Afraid of Feminism? 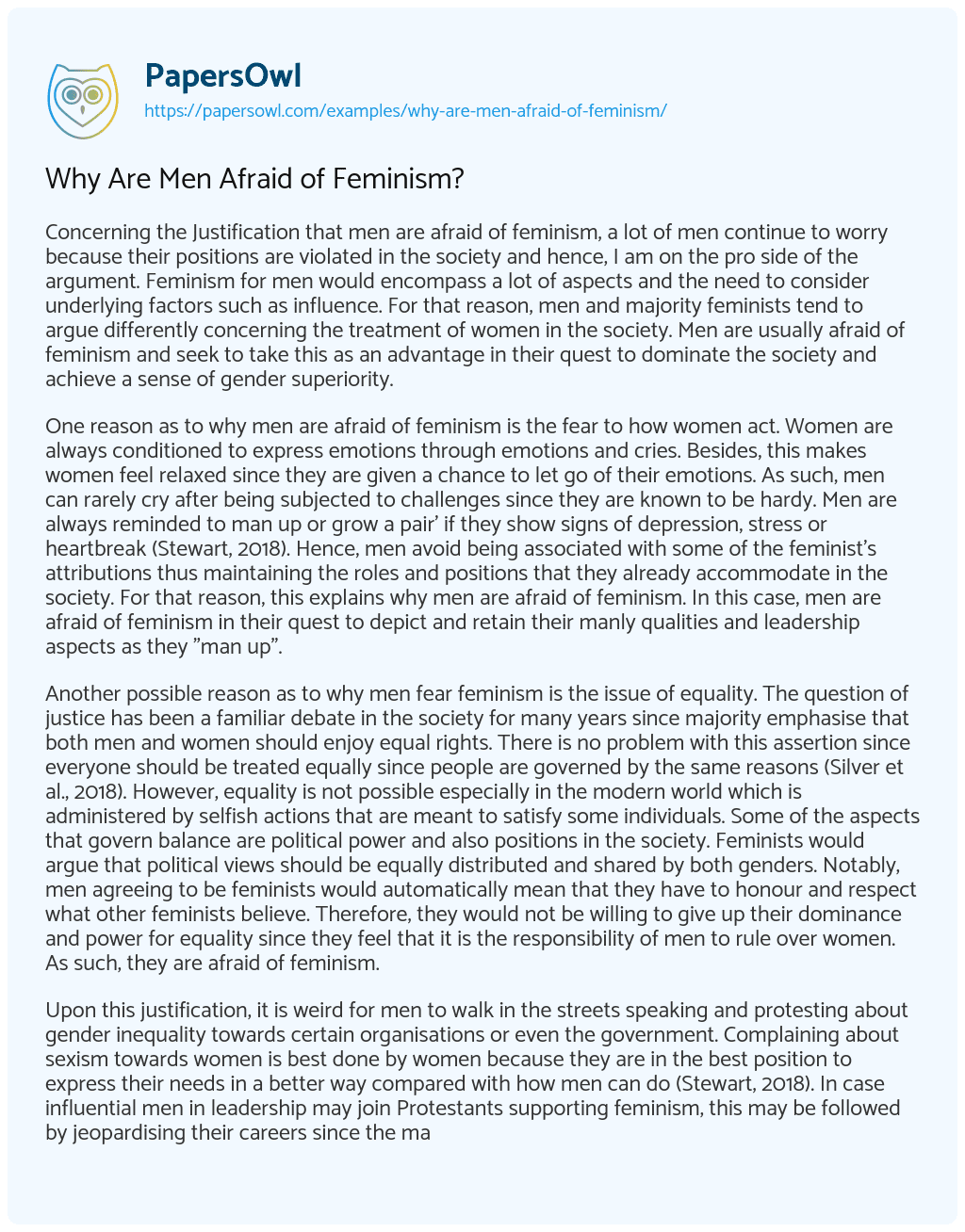 Concerning the Justification that men are afraid of feminism, a lot of men continue to worry because their positions are violated in the society and hence, I am on the pro side of the argument. Feminism for men would encompass a lot of aspects and the need to consider underlying factors such as influence. For that reason, men and majority feminists tend to argue differently concerning the treatment of women in the society. Men are usually afraid of feminism and seek to take this as an advantage in their quest to dominate the society and achieve a sense of gender superiority.

One reason as to why men are afraid of feminism is the fear to how women act. Women are always conditioned to express emotions through emotions and cries. Besides, this makes women feel relaxed since they are given a chance to let go of their emotions. As such, men can rarely cry after being subjected to challenges since they are known to be hardy. Men are always reminded to man up or grow a pair’ if they show signs of depression, stress or heartbreak (Stewart, 2018). Hence, men avoid being associated with some of the feminist’s attributions thus maintaining the roles and positions that they already accommodate in the society. For that reason, this explains why men are afraid of feminism. In this case, men are afraid of feminism in their quest to depict and retain their manly qualities and leadership aspects as they “man up”.

Another possible reason as to why men fear feminism is the issue of equality. The question of justice has been a familiar debate in the society for many years since majority emphasise that both men and women should enjoy equal rights. There is no problem with this assertion since everyone should be treated equally since people are governed by the same reasons (Silver et al., 2018). However, equality is not possible especially in the modern world which is administered by selfish actions that are meant to satisfy some individuals. Some of the aspects that govern balance are political power and also positions in the society. Feminists would argue that political views should be equally distributed and shared by both genders. Notably, men agreeing to be feminists would automatically mean that they have to honour and respect what other feminists believe. Therefore, they would not be willing to give up their dominance and power for equality since they feel that it is the responsibility of men to rule over women. As such, they are afraid of feminism.

Upon this justification, it is weird for men to walk in the streets speaking and protesting about gender inequality towards certain organisations or even the government. Complaining about sexism towards women is best done by women because they are in the best position to express their needs in a better way compared with how men can do (Stewart, 2018). In case influential men in leadership may join Protestants supporting feminism, this may be followed by jeopardising their careers since the majority of the rules are formulated by the same men. Hence, men argue to take positions while they are not actively advocating for feminism in the societies they live in.

Moreover, men feel that they can’t give away their responsibilities which is decision making. Men have been known to come up with decisions that affect the entire family and to some extent the society. This has been a norm that has developed for many years, and male leaders who were dictators have fuelled it. For that reason, men like being the supreme and undoubted decision makers in every aspect. According to Jones (2018), men being feminists would mean that the decision making will be a two-sided thing, hence allowing women to make decisions. This may not work since men prefer dominating the modern world.

Based on the book, Angry White men: American Masculinity at the End of an Era, men see themselves as people who have less meaning towards movements that advocate for feminism (Kimmel, 2017). Further, the book argues that men are governed by validation of their masculinity hence feeling ashamed and humiliated thus seeing women as they cause. As a result, they end up beating their wives and demand them to borrow permission before they engage in any activity. This shows the negative perception that men have on feminism.

In summation, it is evident that men are afraid of feminism since they prefer dominating the world from a distance. Feminists advocate for equal treatment for women in the same way men are treated in all societal aspects. However, this may take longer from happening since the modernised era does not fully embrace such decisions. As a result, men continue observing as women suffer and are violated since they are not willing to take part in advocating for equality.

Why Are Men Afraid of Feminism?. (2019, Jan 22). Retrieved from https://papersowl.com/examples/why-are-men-afraid-of-feminism/

About the Waves of Feminism