About the Waves of Feminism 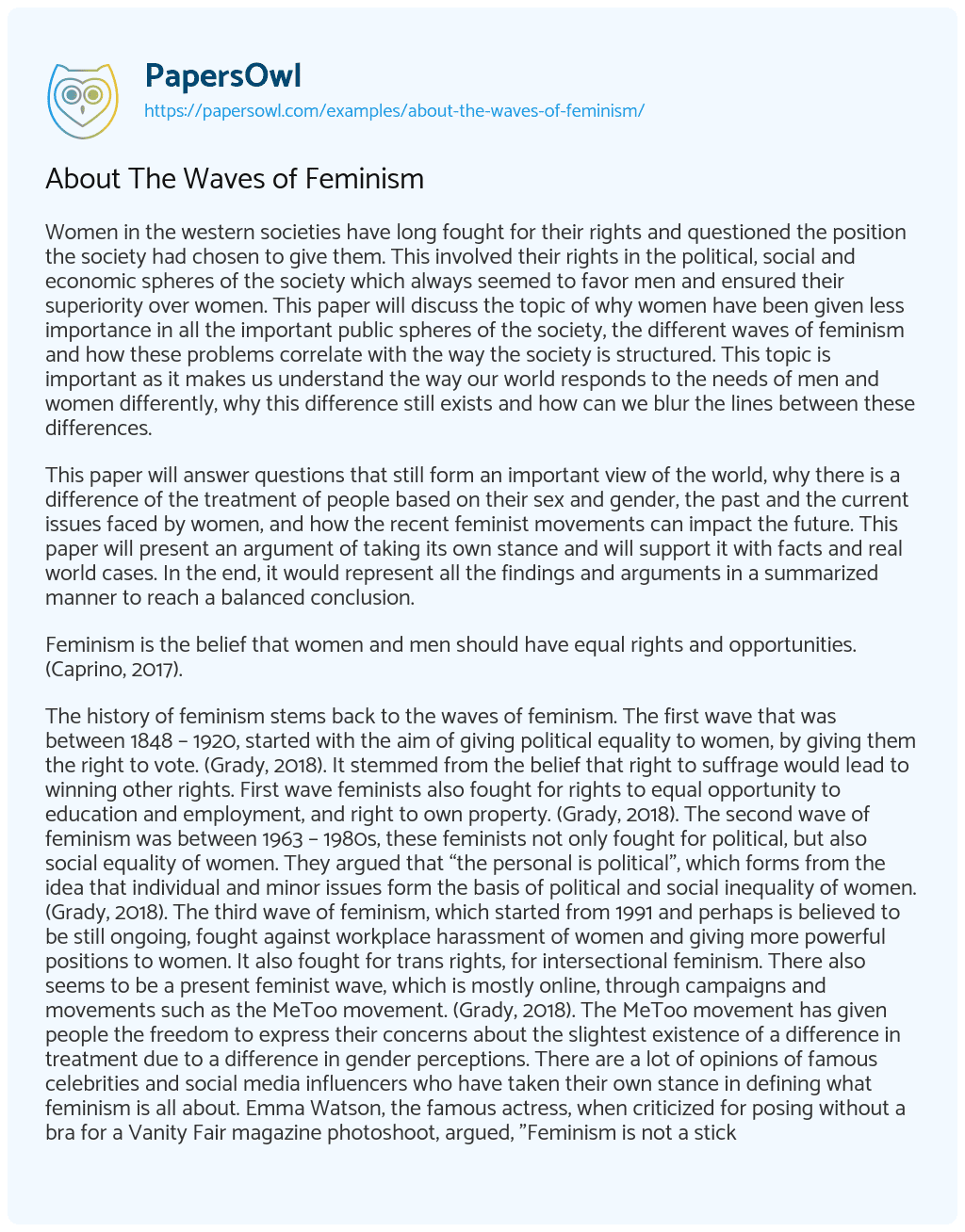 Women in the western societies have long fought for their rights and questioned the position the society had chosen to give them. This involved their rights in the political, social and economic spheres of the society which always seemed to favor men and ensured their superiority over women. This paper will discuss the topic of why women have been given less importance in all the important public spheres of the society, the different waves of feminism and how these problems correlate with the way the society is structured. This topic is important as it makes us understand the way our world responds to the needs of men and women differently, why this difference still exists and how can we blur the lines between these differences.

This paper will answer questions that still form an important view of the world, why there is a difference of the treatment of people based on their sex and gender, the past and the current issues faced by women, and how the recent feminist movements can impact the future. This paper will present an argument of taking its own stance and will support it with facts and real world cases. In the end, it would represent all the findings and arguments in a summarized manner to reach a balanced conclusion.

Feminism is the belief that women and men should have equal rights and opportunities. (Caprino, 2017).

The history of feminism stems back to the waves of feminism. The first wave that was between 1848 – 1920, started with the aim of giving political equality to women, by giving them the right to vote. (Grady, 2018). It stemmed from the belief that right to suffrage would lead to winning other rights. First wave feminists also fought for rights to equal opportunity to education and employment, and right to own property. (Grady, 2018). The second wave of feminism was between 1963 – 1980s, these feminists not only fought for political, but also social equality of women. They argued that “the personal is political”, which forms from the idea that individual and minor issues form the basis of political and social inequality of women. (Grady, 2018). The third wave of feminism, which started from 1991 and perhaps is believed to be still ongoing, fought against workplace harassment of women and giving more powerful positions to women. It also fought for trans rights, for intersectional feminism. There also seems to be a present feminist wave, which is mostly online, through campaigns and movements such as the MeToo movement. (Grady, 2018). The MeToo movement has given people the freedom to express their concerns about the slightest existence of a difference in treatment due to a difference in gender perceptions. There are a lot of opinions of famous celebrities and social media influencers who have taken their own stance in defining what feminism is all about. Emma Watson, the famous actress, when criticized for posing without a bra for a Vanity Fair magazine photoshoot, argued, “Feminism is not a stick with which to beat other women. It’s about freedom, it’s about liberation, it’s about equality.” (BBC news). This argument by the actress is important to understand the very aim of feminism, which is about choice and freedom. Celebrities or other women who are often judged and criticized for the way they choose to dress up, is an alarming sign that people react to choices of women differently than the choices for men, that leads to inequality of the sexes.

This difference in the treatment of women still exists in the modern society. In Canada, women earn 26 per cent less than men — that’s 74 cents for every dollar. (Global News, 2018). There is growing evidence that suggests that female dominated work is undervalued than that dominated by men. A study conducted at the University of Ottawa showed that at one Ontario university, male students who did the same course of study as females and graduated at the same time, earned an average of $10,000 more in their first year after graduation than the females. (Global News, 2018). This difference, as evident in the workplace, also exists within the household. A senior economist at the Canadian Centre for Policy alternatives said, “Women spend twice as many hours on childcare as men do. We need a change in perception of paternity leave as well as in men’s behaviour in taking responsibility for childcare,” (Global news, 2018). This difference shows that women are still considered and chosen to be the sole caretakers of household chores and child rearing duties. This difference exists due to patriarchal structure of the society, where men are thought to be the leaders of the household, and women are required to be submissive. (Garner, Ferdinand, Lawson & MacDonald, 2017).

There are also famous people who suggested their ways of overcoming this inequality between sexes, Patricia T Morris, a magistrate judge and known leader in women’s empowerment suggested that proper value should be given to “women’s work”. The contributions women make to the economy should be highlighted more and there should be a campaign for equal work for equal pay. (theguardian, 2016). Åsa Skogström Feldt, president and CEO of The Hunger Project, USA, argued that there should be more women in power. Women should dominate in local, regional and national legislation, which would become a leading step towards empowering other women. (theguardian, 2016). Njideka Harry, president & CEO, Youth for Technology Foundation (YTF), suggested the strategy of working together and involving girls into the discussion of addressing schooling gap. (theguardian, 2016).

As the issues with gender inequality persist in the modern society, there are a growing number of strategies that are suggested by those in power, to help modify the society and change it into that which does not treat anyone differently, whether men or women. The strategies discussed above, act like a foundation where societies can begin to involve everyone in the discussion, where men can also claim to be feminist, and everyone can get together to ensure the rights of LGBTQ and other minorities within the society. Feminism, though initially a movement to give more rights to women, should work to restore justice in the society by promoting equality through giving equal rights and opportunities to anyone and everyone who deserves it. The society should not be defined by patriarchy or matriarchy, but it should be defined by equal division of labor, with equal pay given to the work, and equal division of responsibilities between every person, regardless of their sex or gender. Research has suggested that less traditional fathers spend more time in caring for their child and egalitarian men, who believe in equality of both the sexes, believe that the relationship with their children is a better success marker than their financial contributions. (Davis & Greenstein, 2009). The perspective of working together, and involving girls into the discussion, should be the most important approach when dealing with gender inequality. This is because no discussion can take place unless those being discussed have their own say about dealing with their issues. This is also true about giving them power, when women are given important roles in the society, they can help reform laws that make their position weaker in the society, and can lead towards a new structure of the society, which is much more balanced.

There is a real life example that includes most of the reformative strategies discussed above. That is the Gender Equality Framework Programme by the Federal State of Berlin, which outlines 10 principles focused on gender equality of both the sexes. This includes equality of men and women in the political, social, economic and cultural facets, equitable participation in the state’s resources, each earning their own livelihood and equal access to employment, equitable share in family and care related work, (involving household chores and child rearing), gender equitable programs in health care and sports and equal freedom to express their selves. (eige.europa.eu, 2019). This example demonstrates how working together, men and women can secure their own equally dominant positions in all the public spheres of the society, and can ensure that no undue advantage is given to anyone based on their sex or gender difference. This policy taken by Berlin also encourages other states and countries to implement a strategy that focuses on gender equality and helps to remove inequality and gender discrimination from the society.

The findings of this paper suggest that gender discrimination had always been evident in the western societies from the past, and different waves of feminism have fought for the rights and opportunities of women in the public spheres of the society, this gender discrimination still prevails in the modern world, with an evidence of gender pay gap and domination of men in certain political and economic parts of society, thus the more recent wave of feminism, with the MeToo movement, have highlighted such gender based discriminations and encouraged women to step forward and become more involved in their discussions. A framework based on equality can help to overcome gender inequality and ensure a more balanced society where success is not determined by gender.

About The Waves of Feminism. (2020, Oct 23). Retrieved from https://papersowl.com/examples/about-the-waves-of-feminism/