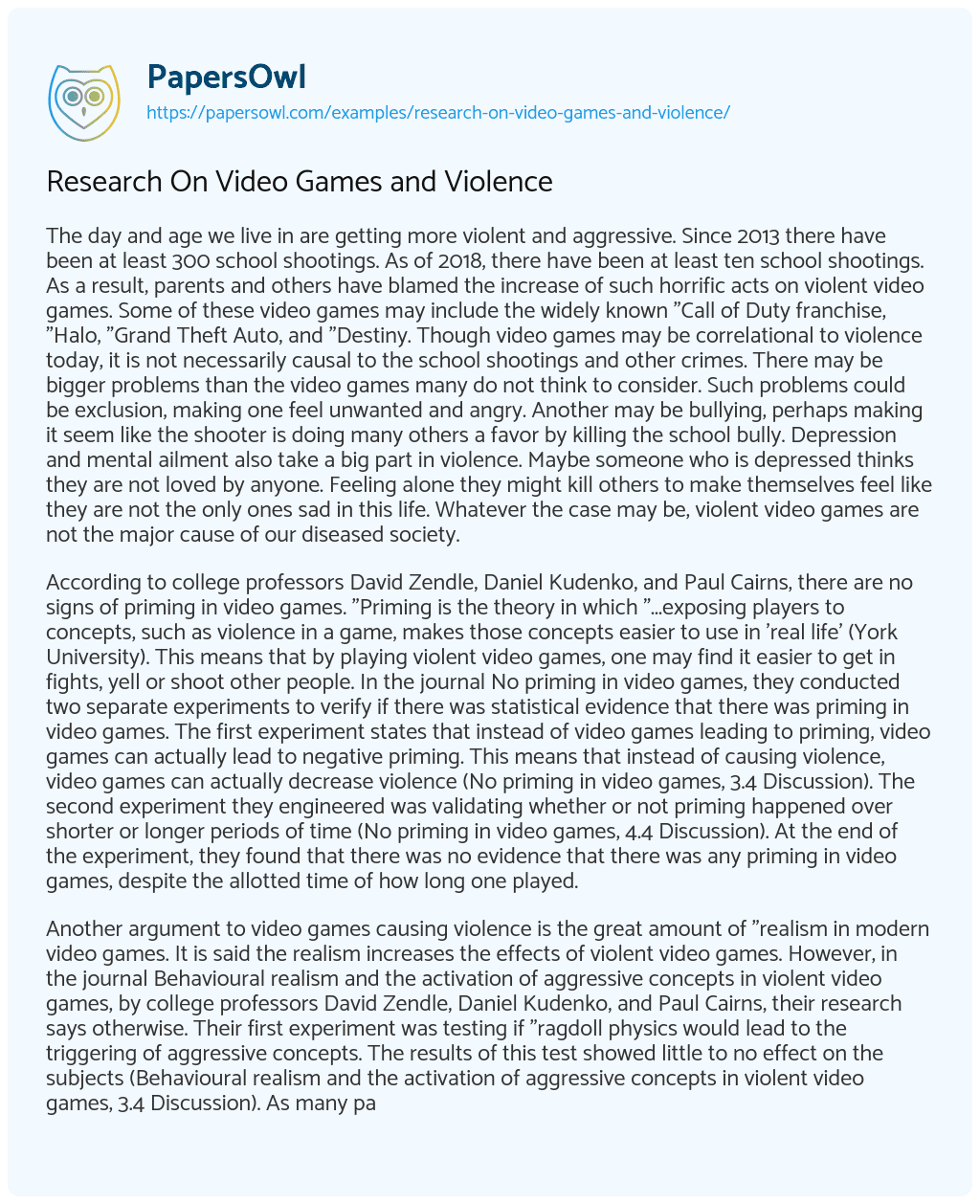 The day and age we live in are getting more violent and aggressive. Since 2013 there have been at least 300 school shootings. As of 2018, there have been at least ten school shootings. As a result, parents and others have blamed the increase of such horrific acts on violent video games. Some of these video games may include the widely known “Call of Duty franchise, “Halo, “Grand Theft Auto, and “Destiny. Though video games may be correlational to violence today, it is not necessarily causal to the school shootings and other crimes. There may be bigger problems than the video games many do not think to consider. Such problems could be exclusion, making one feel unwanted and angry. Another may be bullying, perhaps making it seem like the shooter is doing many others a favor by killing the school bully. Depression and mental ailment also take a big part in violence. Maybe someone who is depressed thinks they are not loved by anyone. Feeling alone they might kill others to make themselves feel like they are not the only ones sad in this life. Whatever the case may be, violent video games are not the major cause of our diseased society.

Many adults blame violence on video games without considering the many other factors leading to violence. Such things may involve bullying and substance abuse. According to David Bond, people who are more prone to violence will more than likely be drawn to the violent nature of video games, also including many other reasons leading to violence. David Bond cites Patrick M. Markey, Charlotte N. Markey, Jeanne B. Funk, Mary K. Engle, and Christopher J. Ferguson: The Catalyst Model proposes that persons who are prone to violence because of other biopsychosocial variables will be “catalyzed or stimulated to enjoy the violence in video games The model also predicts that those individuals with preexisting risk factors for violence might be pushed “over the edge” because of violent video games and choose violence as a valid solution to problems. However, a number of studies contradict the findings of Anderson’s meta-analysis. Other investigators reported no correlation between playing violent video games and increased aggression levels, whereas others suggested that violent video games only caused increased aggression in subjects who scored in the top quartile of trait aggression on psychological tests.

A wide variety of other factors are more important antecedents of aggression than violent video games, including child abuse and neglect, victimization, bullying, drug and alcohol abuse, exposure to violence in the home, neurobiological indicators, low socioeconomic status, and access to guns. (Bond, pp. 7-8)Though there are many studies wherein violent video games cause violence, none of them take into consideration that part of the problem may be genetics and other lurking variables. According to Christopher J. Ferguson, the “GAM (General Aggression Model) “…theory implies passive modeling in which individuals exposed to [violent video games] will more often engage in violent behavior regardless of personality, family environment, genetics, or other biological contributions (Ferguson, 2008, pp. 4). Ferguson also put together an experiment testing how long you had to play video games to become violent. From the data Ferguson gathered, there was no causal evidence that video games increased violence. However, he found that there was a correlation between aggression and genders. The males were more into the violence while the females were not. Nonetheless, no violence increased in either case.

Ferguson says in his research “…any relationship between violent video games (and other forms of violent media) and violent behavior is correlational but not causal… (Ferguson, 2008, pp. 4). He indicates that there is a correlation between those who are more prone to violence and aggressive video games. However, Ferguson manifests that the relationship between the two is not causal. This means that violent video games do not cause the violence in people, but violent people are more likely to be attracted to the violent nature of such games. Ferguson states that environmental issues accelerate violence rather than violent video games:Thus, although the environment does not cause violence propensity, times of stress may act as catalysts for violent acts for an individual already prone to them. Such environmental strains could include financial and social problems caused by divorce, legal troubles, and similar events. Put another way, although the basic propensity to respond to events violently is brought about primarily through biological factors and family violence, the environment can supply the immediate motive for violence.

Violent behaviors would then be expected to occur more frequently at times during which environmental motives are more plentiful. Individuals with higher violence proneness are likely to require less environmental strain to engage in violent behavior, although the possibility exists that a considerable proportion of individuals may engage in violent behavior under significant environmental strain (e.g., war-like conditions). (Ferguson, 2008, pp. 5)Ferguson conveys the thought that those who have a propensity for violence may perhaps be attracted to the violent nature of video games. Ferguson also projects the idea that the environment in the video games does not cause the violence. He instead portrays the thought process that the environment only stimulates one who has the predisposition to be violent. Some environments may not even take place in the games themselves. Instead, they may take place in real time society. Some of these may include financial problems, divorce, and biological issues.

Jonathan L. Freedman, a psychology professor at the University of Toronto, studied the research done on violent video games. Freedman claims “…whenever these horrible [shootings] occur, people search for a reason(Freedman, 2010). Jonathan then goes on to elaborate that adults’ attention has turned to violent video games. He explains the thought process behind these adults, saying that if we shoot enough images or animals in a video game, it will teach us that it is ok to kill. His final declares that there is not enough information to firmly state that everyone who plays violent video games tends to be more hostile than those who do not play as much. Freedman continues to say that this evidence is only correlational and that it does not tell whether or not it is causal. He also acknowledges that there is little to no evidence that promptly after playing video games there is an escalation in violence. Despite the fact that there may be a short increase in violence, he professes that there is no lasting increase in violence from playing video games (Freedman, 2010).

In 2004, Thomas A. Kooijmans dove into the controversy about video games. He studied Craig A. Anderson and Brad J. Bushmans General Aggression Model and found that adolescents in their early stages of puberty tend to be more prone to violence. While studying the General Aggression Model Kooijmans discovered video games cause more violence in young teens going through their early stages of puberty (Kooijmans). However, Kooijmans takes the side that certain video games help with certain skills such as eye-hand coordination. Additionally, Kooijmans supports the idea that violent video games could help future recruits to the military (Kooijmans). Likewise, violent video games could help military veterans become functioning members of society again. Furthermore these violent video games can help these veterans get over PTSD.

Video games are not to blame for the violence today. Opposing the traditional views video games can be used as therapy to help those needing hand-eye coordination. Going hand in hand with this, military veterans could use violent video games to get over PTSD. Additionally, current military leaders could use violent video game simulations to train military recruits for real world military operations. The problem to violence in our society today is not violent video games, but rather mental illness, environmental stress, bullying and so on. Video games are not the cause of the problem, but instead a symptom of the bigger disease. Those who are susceptible to violence are merely attracted to the video games, rather than the video games causing the violence. Instead of blaming every violent act in our society on video games, society should look deeper into the reason for an outbreak of violence. Perhaps the one who killed the school bully was tired of being made fun of. Feasibly, the killer was mentally ill and thought they were doing good for the world. Whatsoever the case may be, the community needs to look at environmental causes besides the violence in modern video games.

Research On Video Games and Violence. (2019, Jan 22). Retrieved from https://papersowl.com/examples/research-on-video-games-and-violence/