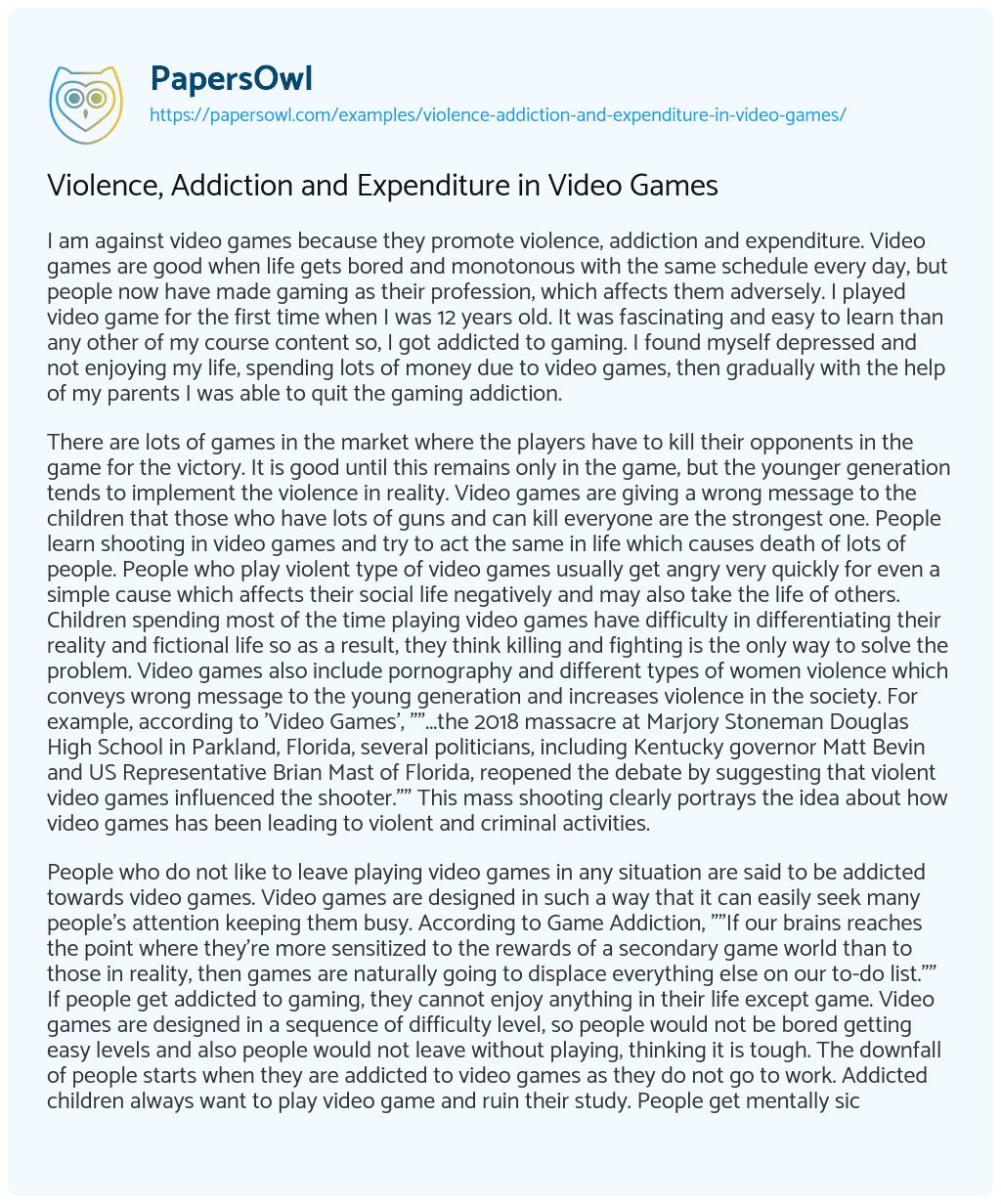 I am against video games because they promote violence, addiction and expenditure. Video games are good when life gets bored and monotonous with the same schedule every day, but people now have made gaming as their profession, which affects them adversely. I played video game for the first time when I was 12 years old. It was fascinating and easy to learn than any other of my course content so, I got addicted to gaming. I found myself depressed and not enjoying my life, spending lots of money due to video games, then gradually with the help of my parents I was able to quit the gaming addiction.

There are lots of games in the market where the players have to kill their opponents in the game for the victory. It is good until this remains only in the game, but the younger generation tends to implement the violence in reality. Video games are giving a wrong message to the children that those who have lots of guns and can kill everyone are the strongest one. People learn shooting in video games and try to act the same in life which causes death of lots of people. People who play violent type of video games usually get angry very quickly for even a simple cause which affects their social life negatively and may also take the life of others. Children spending most of the time playing video games have difficulty in differentiating their reality and fictional life so as a result, they think killing and fighting is the only way to solve the problem. Video games also include pornography and different types of women violence which conveys wrong message to the young generation and increases violence in the society. For example, according to ‘Video Games’, “”…the 2018 massacre at Marjory Stoneman Douglas High School in Parkland, Florida, several politicians, including Kentucky governor Matt Bevin and US Representative Brian Mast of Florida, reopened the debate by suggesting that violent video games influenced the shooter.”” This mass shooting clearly portrays the idea about how video games has been leading to violent and criminal activities.

People who do not like to leave playing video games in any situation are said to be addicted towards video games. Video games are designed in such a way that it can easily seek many people’s attention keeping them busy. According to Game Addiction, “”If our brains reaches the point where they’re more sensitized to the rewards of a secondary game world than to those in reality, then games are naturally going to displace everything else on our to-do list.”” If people get addicted to gaming, they cannot enjoy anything in their life except game. Video games are designed in a sequence of difficulty level, so people would not be bored getting easy levels and also people would not leave without playing, thinking it is tough. The downfall of people starts when they are addicted to video games as they do not go to work. Addicted children always want to play video game and ruin their study. People get mentally sick being around the video games every moment. According to ‘Video Games Cause Aggressive and Violent Behavior in Youths’ , “”Video game addiction has led some children to fail out of school, alienate themselves from everyone in their lives and, in extreme cases, to commit suicide… As with any addiction, once children are hooked, it is very difficult for them to quit.”” People lose their responsibility towards family members and friends due to addiction of video games. Addiction towards games also lead to the unhealthy behavior as the people do not have time to clean their surrounding and themselves.

Video games occupies huge amount of budget in anyone’s expenses. Video gaming deals with a lot of technology. We need television, video games, controller and so on to enjoy gaming, which is not affordable by ordinary people. According to BestBuy, An XBOX ONE costs $299.99. This price is only for device; we also need to buy television and games for gaming which makes our gaming costlier. Lots of video games do not demand extra money at the time of buying but while we keep playing, we get options like upgrade characters, unlock next level, get extra lives and so on, which increases the expenses too. People get lots of health problems with their eyes and back pain by playing video games for long time which ultimately increases their expenses. Video games need electricity as the source of energy to operate which increases our electricity bill and adds an extra expense to people. The gaming company always try to make slight change in their new version of the same game which makes people to spend extra money for the new version.

Video games have been playing an important role in promoting violence. Violence like breaking the traffic rules and laws, murder, mass shooting, robbery, women violence and so on, are depicted through video games which leaves a negative impact on the children’s brain. There is an unhealthy competition of killing and fighting in the video game which directly affects the children’s brain. These types of video games are teaching the children to kill and fight among each other to get the required goal. People playing video games tend to be quick tempered and over reactive to any of the activity around them, which affects their social as well as personal life.