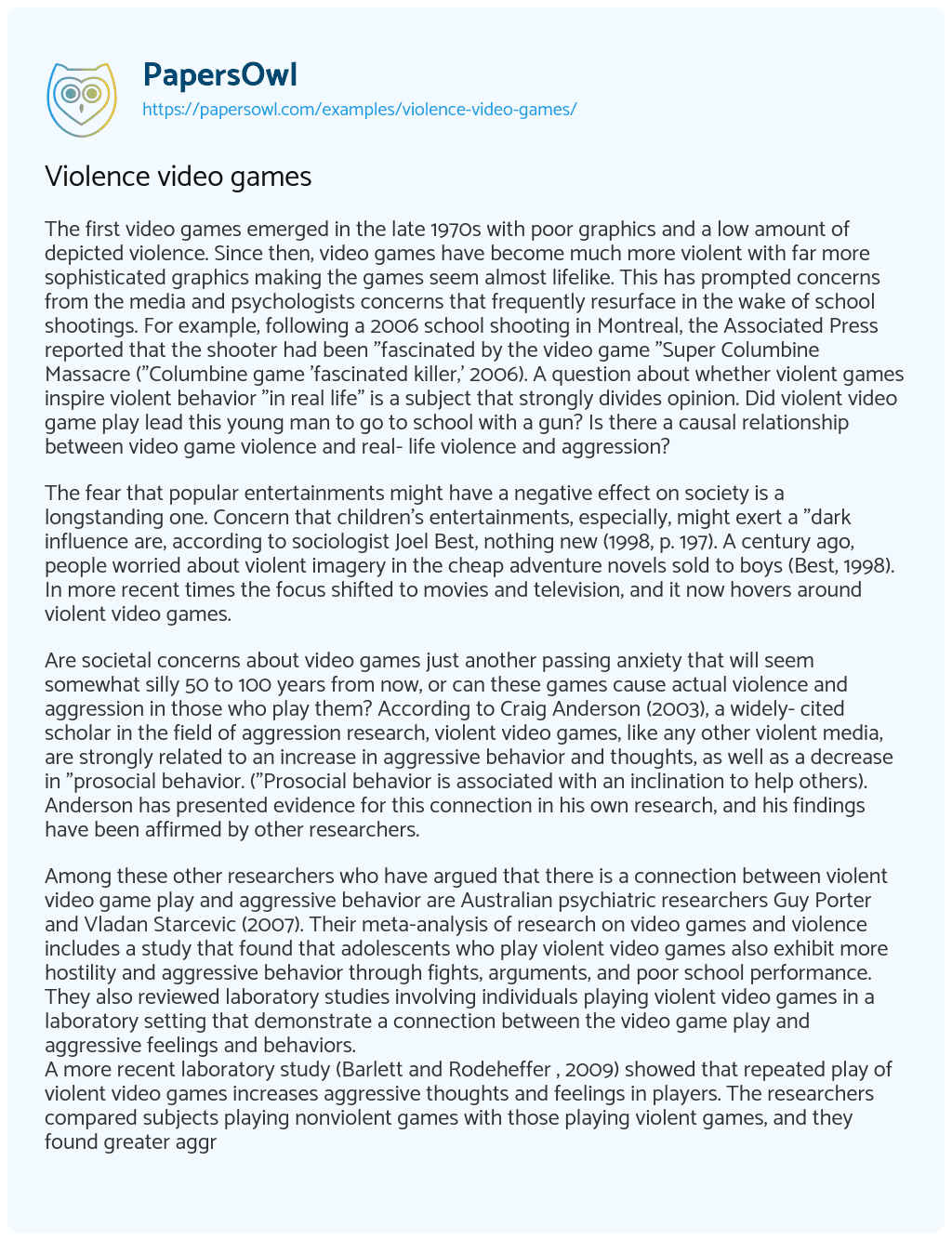 The first video games emerged in the late 1970s with poor graphics and a low amount of depicted violence. Since then, video games have become much more violent with far more sophisticated graphics making the games seem almost lifelike. This has prompted concerns from the media and psychologists concerns that frequently resurface in the wake of school shootings. For example, following a 2006 school shooting in Montreal, the Associated Press reported that the shooter had been “fascinated by the video game “Super Columbine Massacre (“Columbine game ‘fascinated killer,’ 2006). A question about whether violent games inspire violent behavior “in real life” is a subject that strongly divides opinion. Did violent video game play lead this young man to go to school with a gun? Is there a causal relationship between video game violence and real- life violence and aggression?

The fear that popular entertainments might have a negative effect on society is a longstanding one. Concern that children’s entertainments, especially, might exert a “dark influence are, according to sociologist Joel Best, nothing new (1998, p. 197). A century ago, people worried about violent imagery in the cheap adventure novels sold to boys (Best, 1998). In more recent times the focus shifted to movies and television, and it now hovers around violent video games.

Are societal concerns about video games just another passing anxiety that will seem somewhat silly 50 to 100 years from now, or can these games cause actual violence and aggression in those who play them? According to Craig Anderson (2003), a widely- cited scholar in the field of aggression research, violent video games, like any other violent media, are strongly related to an increase in aggressive behavior and thoughts, as well as a decrease in “prosocial behavior. (“Prosocial behavior is associated with an inclination to help others). Anderson has presented evidence for this connection in his own research, and his findings have been affirmed by other researchers.

Critics of the idea that violent video game play leads to violence and aggression have focused much of their criticism on the methods employed by aggression researchers. Research psychologist Christopher Ferguson has been a particularly outspoken critic of studies that link video games and aggression. For example, he criticizes Anderson’s use of a “noise blast program (which produces an irritating noise to punish player error) for its inconsistent frequencies and pitches, which could be changed during violent and non- violent interaction during game play and thus could be used to skew the results (Ferguson, 2007). In one of his own studies (as cited in Ferguson, 2007), Ferguson re-administered Anderson’s study using a new more reliable and standardized version of the “noise blast program. This program had a standard noise that did not change in frequency and pitch, and did not change during violent and non-violent interaction during game play. The new program showed that exposure to violent video games had no relationship with aggression in the players.

Ferguson also looked at five meta-analyses of the effects of violent video games and aggression in the players. He found that the results of the studies were mixed. In two of the studies, the link between violent video games and aggression were positive but weak; the other three studies showed no connection. The studies used a wide variety of measures related to aggression–“behavioral, cognitive, affective, physiological, and prosocial measures (Ferguson 2007, p. 311) which, Ferguson suggests, limits opportunities for synthesis, as too many different things are being measured. In his own research, he did not find a causal connection aggressive thoughts and aggressive behavior.
Epidemiologists have further challenged the idea that violent games cause violent behavior by arguing that, if violent video games did cause aggression and violence in the players, then the growing popularity of violent video games would be occurring alongside a growth in violent crimes (Bensley and Eenwyk, 2001). But according to the Federal Bureau of Investigation, violent crimes have decreased rather than increased over the past decade (U.S. DOJ, 2009).

In summary, while there appear to be many studies that, in a variety of different ways, link violent video games to violent and aggressive behavior, there is no real proof that this is a cause-and-effect relationship, and there is much evidence to suggest that it isn’t. Throughout history, violence has been depicted in many forms. Today’s depictions of violence in movies and video games are tame compared to the actual violence perpetrated during public gladiatorial games held in ancient Rome, or to the public executions, witch hunts, and trials of the middle ages. The two perpetrators of the Columbine massacre may have played violent video games but is more likely that their behavior was linked to their own personality issues and not the games they played.