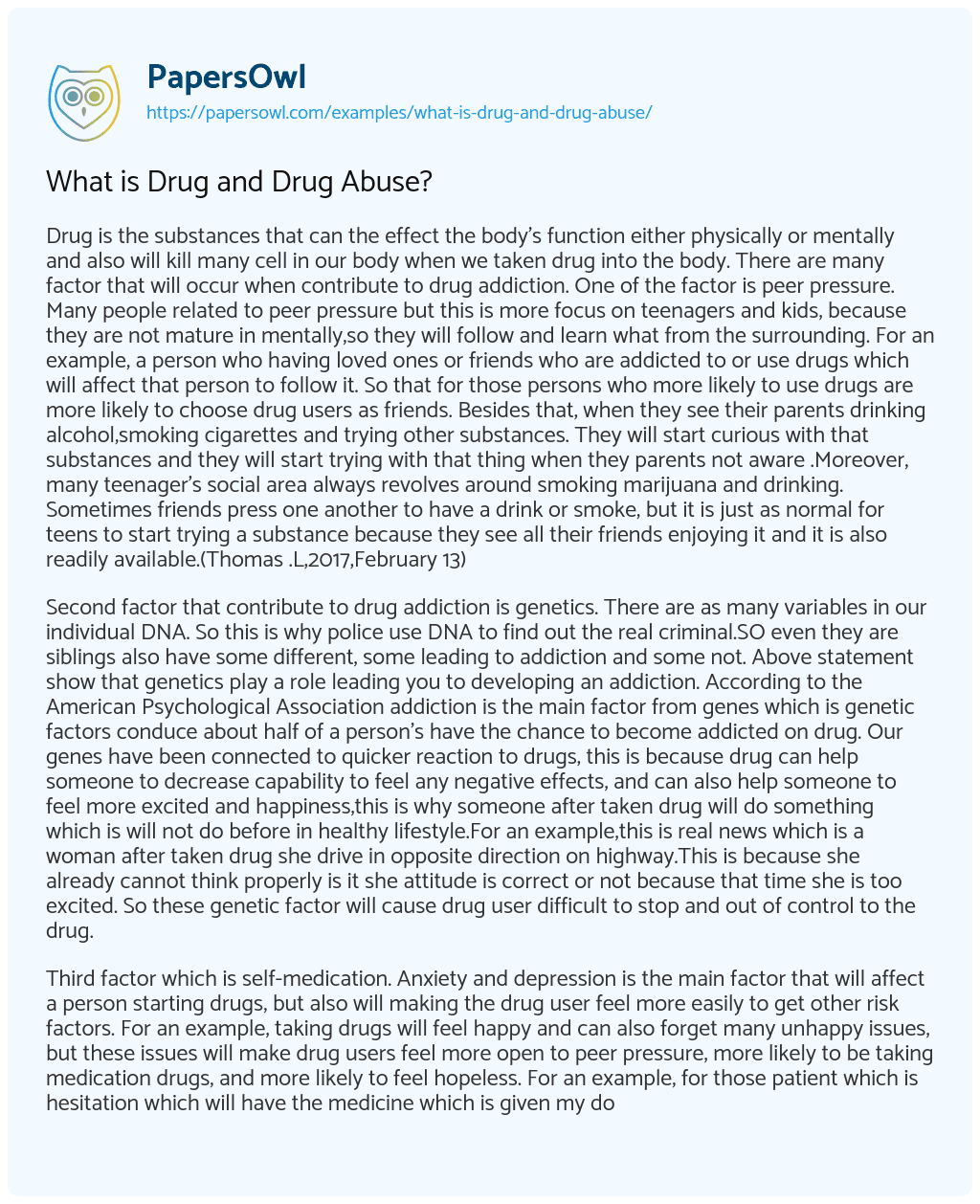 Drug is the substances that can the effect the body’s function either physically or mentally and also will kill many cell in our body when we taken drug into the body. There are many factor that will occur when contribute to drug addiction. One of the factor is peer pressure. Many people related to peer pressure but this is more focus on teenagers and kids, because they are not mature in mentally,so they will follow and learn what from the surrounding. For an example, a person who having loved ones or friends who are addicted to or use drugs which will affect that person to follow it. So that for those persons who more likely to use drugs are more likely to choose drug users as friends. Besides that, when they see their parents drinking alcohol,smoking cigarettes and trying other substances. They will start curious with that substances and they will start trying with that thing when they parents not aware .Moreover, many teenager’s social area always revolves around smoking marijuana and drinking. Sometimes friends press one another to have a drink or smoke, but it is just as normal for teens to start trying a substance because they see all their friends enjoying it and it is also readily available.(Thomas .L,2017,February 13)

Second factor that contribute to drug addiction is genetics. There are as many variables in our individual DNA. So this is why police use DNA to find out the real criminal.SO even they are siblings also have some different, some leading to addiction and some not. Above statement show that genetics play a role leading you to developing an addiction. According to the American Psychological Association addiction is the main factor from genes which is genetic factors conduce about half of a person’s have the chance to become addicted on drug. Our genes have been connected to quicker reaction to drugs, this is because drug can help someone to decrease capability to feel any negative effects, and can also help someone to feel more excited and happiness,this is why someone after taken drug will do something which is will not do before in healthy lifestyle.For an example,this is real news which is a woman after taken drug she drive in opposite direction on highway.This is because she already cannot think properly is it she attitude is correct or not because that time she is too excited. So these genetic factor will cause drug user difficult to stop and out of control to the drug.

Third factor which is self-medication. Anxiety and depression is the main factor that will affect a person starting drugs, but also will making the drug user feel more easily to get other risk factors. For an example, taking drugs will feel happy and can also forget many unhappy issues, but these issues will make drug users feel more open to peer pressure, more likely to be taking medication drugs, and more likely to feel hopeless. For an example, for those patient which is hesitation which will have the medicine which is given my doctor to control their attitude, the medicine is like a drug to help them feel more relax and happiness, but for the patient which is will not following the advice by doctor so they will have the medicine according to theirselves .Thus they will start addicted to the drug and will always rely on the medicine. Besides that,when teens are unhappy, but they cannot find a healthy way for them to release or said out they will always keep it their own, so they will start trying to take drug because drug can help them to turn from irritable to conciliation . This is depending on what substance they are trying, so that they may feel happy and confident. This is why drug user cannot resist because they have the chance to make them feel better when taking something.(Palititato. F,2007)

Since there have a lot of factor that contribute to drug addiction, so the preventing early of using drugs is needed. One of the solution to prevent drug addiction is through out education. Drug abuse prevention start with education by spreading the word regarding the dangers of drugs to everyone, mainly we focus on children and teenagers because when they are still young, and thinking not so mature, so we can using education to give them know what is the bad and the effect after taking drug. Goverment also can held a drug abuse preventation talk or exhibition in every school and participant will be their parents and community. To be effective, communities need to sustain the progress . If one of the family member is taking drug, so parents also hard to prevent their kids taking dugs, so every parents must be a model for their kids which is will no taking drugs.(Silimon,J,2009, November 12)

Second solution is effectively deal with peer pressure. The main reason teenagers start taking drugs because of their friends all is drug user.So they must either find a better group of friends that would not pressure you doing harmful things, or you need to find a good way to reject and without make them unhappy,which is reject them together doing harmful thing but still is best friend.So every teenager should prepare a good excuse to keep from giving into tempting situations.If is shy to say out then you is the one suffer on drug,or you think never mind just one times will not effect so much,then you are wrong, you will addicted when u first trying that things.This is because drug can turn to addiction rapidly when you start taking drug; no one is plans on becoming a drug addict. So everyone please do not try or even get influenced by your friend.(Malibu,2005)

Last but not least, the other solution which can prevent drug addiction is start practice healthier living habits. For an example, exercise, eating well and meditation are good ways to avoid using drugs. Meditation can improve physical health and help someone to relax by reducing strain on heart.This is because being a healthy lifestyle can help people deal with the life stresses easily and can also manages trauma more easily.This is because exercise can help blood circulation, so everyone can feel more energetic and spirit. Besides, people start to take drugs is beacuase their life is too bored and not working, or they feel very upset. So everyone must also have a healthy lifestyle and let your life become enrich and useful. (Rovitom.Sam,1986)

In conclusion, after I complete the case study on drug, I realized that delaying treatment will worsens the case which is heavy drug users are at grave risk of overdose, which can lead to hospitalization and ultimately to death. This is why, once the drug misuse, it is better to take strict steps should be taken in order to control and prevent the supply and transactions of such harmful elements.So, I make sure that every level of community must take their important role to prevent the drug abuse.Then the whole nation will live in the peace and everyone have healthy lifestyle.

What is Drug and Drug Abuse?. (2021, Mar 20). Retrieved from https://papersowl.com/examples/what-is-drug-and-drug-abuse/