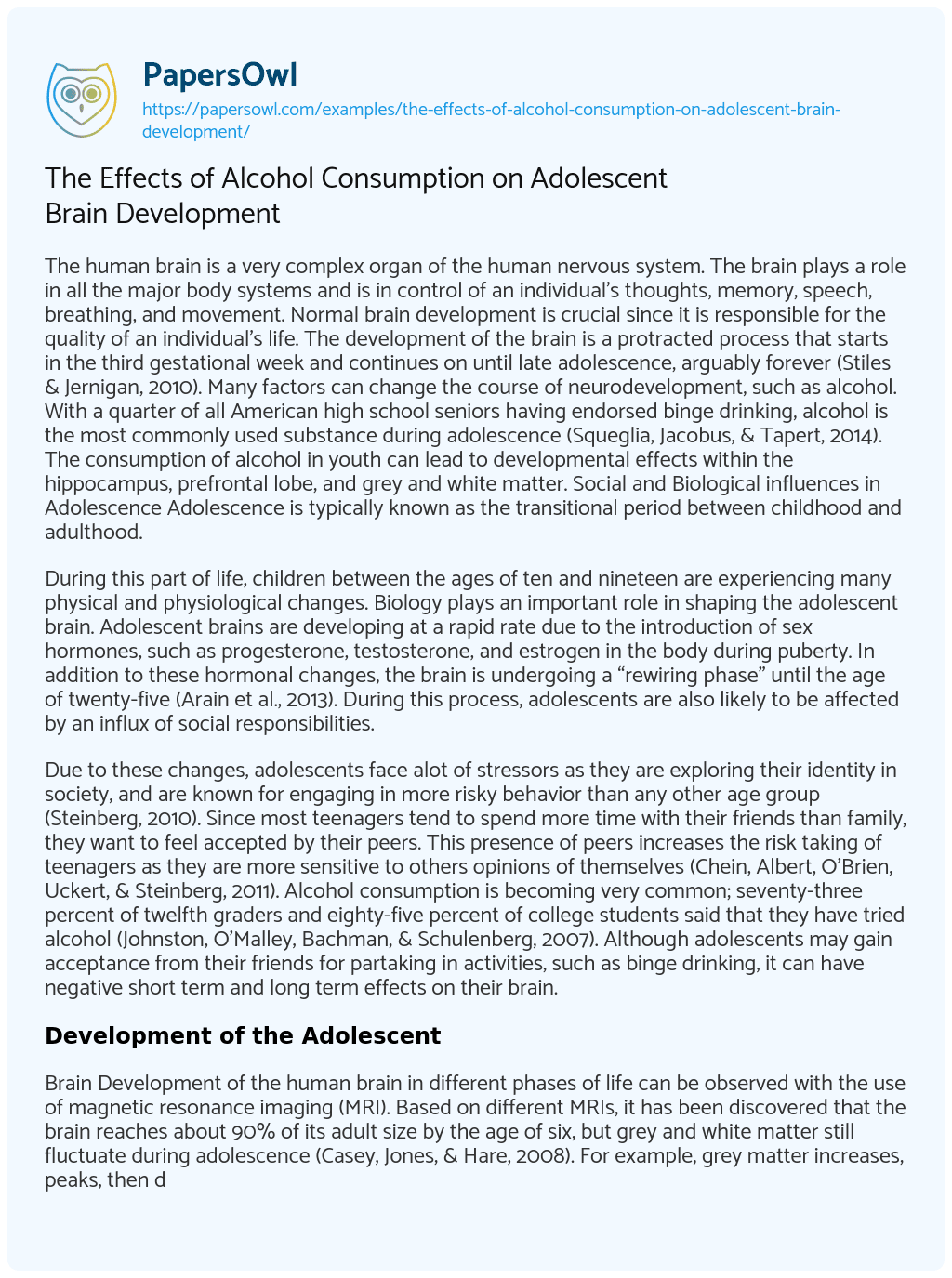 The human brain is a very complex organ of the human nervous system. The brain plays a role in all the major body systems and is in control of an individual’s thoughts, memory, speech, breathing, and movement. Normal brain development is crucial since it is responsible for the quality of an individual’s life. The development of the brain is a protracted process that starts in the third gestational week and continues on until late adolescence, arguably forever (Stiles & Jernigan, 2010). Many factors can change the course of neurodevelopment, such as alcohol. With a quarter of all American high school seniors having endorsed binge drinking, alcohol is the most commonly used substance during adolescence (Squeglia, Jacobus, & Tapert, 2014). The consumption of alcohol in youth can lead to developmental effects within the hippocampus, prefrontal lobe, and grey and white matter. Social and Biological influences in Adolescence Adolescence is typically known as the transitional period between childhood and adulthood.

During this part of life, children between the ages of ten and nineteen are experiencing many physical and physiological changes. Biology plays an important role in shaping the adolescent brain. Adolescent brains are developing at a rapid rate due to the introduction of sex hormones, such as progesterone, testosterone, and estrogen in the body during puberty. In addition to these hormonal changes, the brain is undergoing a “rewiring phase” until the age of twenty-five (Arain et al., 2013). During this process, adolescents are also likely to be affected by an influx of social responsibilities.

Due to these changes, adolescents face alot of stressors as they are exploring their identity in society, and are known for engaging in more risky behavior than any other age group (Steinberg, 2010). Since most teenagers tend to spend more time with their friends than family, they want to feel accepted by their peers. This presence of peers increases the risk taking of teenagers as they are more sensitive to others opinions of themselves (Chein, Albert, O’Brien, Uckert, & Steinberg, 2011). Alcohol consumption is becoming very common; seventy-three percent of twelfth graders and eighty-five percent of college students said that they have tried alcohol (Johnston, O’Malley, Bachman, & Schulenberg, 2007). Although adolescents may gain acceptance from their friends for partaking in activities, such as binge drinking, it can have negative short term and long term effects on their brain.

Development of the Adolescent

Brain Development of the human brain in different phases of life can be observed with the use of magnetic resonance imaging (MRI). Based on different MRIs, it has been discovered that the brain reaches about 90% of its adult size by the age of six, but grey and white matter still fluctuate during adolescence (Casey, Jones, & Hare, 2008). For example, grey matter increases, peaks, then decreases while white matter increases in a linear trend throughout adolescence.

These tissues serve important roles in bodily function. Likewise, the prefrontal cortex is one of the last regions of the brain that undergoes maturation in adolescence to the age of twenty five (Arain et al., 2013). This cortex is important for decision making and judgment during difficult situations, and the hippocampus, which can also be affected, assist teenagers as they gain more knowledge through education and life experiences (Sneider et al., 2018). The normal development of the hippocampus is vital in the involvement in the creation of new memories and learning. Since the grey and white matter, prefrontal cortex, and hippocampus are all developing during adolescence, they are all vulnerable to the effects of alcohol consumption.

Grey and white matter are usually the most heard terms when discussing the brain. White matter consists of myelinated nerve fibers that connect grey matter from different parts of the brain to each other. This connection between various areas of the brain In a study performed on 40 Prefrontal Cortex The prefrontal cortex, which can be found in the frontal lobe, is involved in making decision and judgments in tough situations. Research using magnetic resonance imaging (MRI) have shown that teenagers who heavily drink have smaller prefrontal cortex volume than teenagers who have never had alcohol before (Squeglia et al., 2014). This decrease of brain volume in the prefrontal cortex can lead to deficient judgment, hence lead to impulsive decisions.

Another study observed similar alterations on the development of the prefrontal cortex in individuals with heavy alcohol consumption and with psychiatric conditions (Silveri, 2012). Due to the deviation from normal development of the prefrontal cortex, students who had greater alcohol-related problem also reported having higher levels of depression compared to their peers who have not engaged in drinking alcohol. Not only can heavy alcohol consumption interfere with one’s decision making, but can also have lasting impact on their overall mental health. Hippocampus The hippocampus plays an important role in learning and creating short and long term memories. In a study performed on rats, the adolescent ones experienced more impairment than the adult ones on hippocampal-dependent learning and memory tasks after being exposed to high levels of alcohol (Welch, Carson, & Lawrie, 2013). Ethical considerations prohibit the use of adolescents in the study given the high-levels of alcohol consumption needed to conduct the study. The effects observed in the rat brains are similar to adolescent human brains, because both are in a critical period of development during this phase of life. In the same study conducted by Silveri (2012), observed alterations in the development of the hippocampus was deduced to lead to depression, similar to the changes in the prefrontal lobe. With this association, alcohol can be regarded as a depressant that also limits one’s memory retention and performance.

Strategies to Better Prevention of Underage Drinking The prevention of underage drinking has been prevalent since the passing of the National Minimum Act in 1984. School districts across the United States educate students at an early age that drinking can lead to involvement in risky behavior and death of others when driving under the influence. Despite these efforts made in drivers education or health class, many adolescence still engage in underage drinking. Therefore, better methods of relaying the effects of underage exposure to alcohol need to be implemented. Research shows that prevention methods are enhanced when combined with intervention and referral programs (Harding et al., 2016). Combination of intervention and referral programs with school education can aid students from reverting to alcohol. Research also shows that most school districts use non-interactive methods than interactive ones when discussing drugs and alcohol use (Bonnie & O’Connell, 2004). The use of interactive methods, such as fatal vision alcohol impairment goggles activities (drunk goggles), can increase understanding of the side effects of drinking alcohol for adolescents and increase engagement in the activities regarding alcohol prevention. The emphasis on intervention programs and interactive educational activities could aid in decreasing the rate of adolescents who partake in underage drinking.

Adolescence is a critical period for the development of the brain. The introduction of toxins, such as alcohol, can severely alter one’s neurodevelopment.

The Effects of Alcohol Consumption on Adolescent Brain Development. (2021, Mar 20). Retrieved from https://papersowl.com/examples/the-effects-of-alcohol-consumption-on-adolescent-brain-development/

The Brain Mechanisms of Chronic Alcohol

The Brain of a Psycopath

Effects of Alcohol on Children