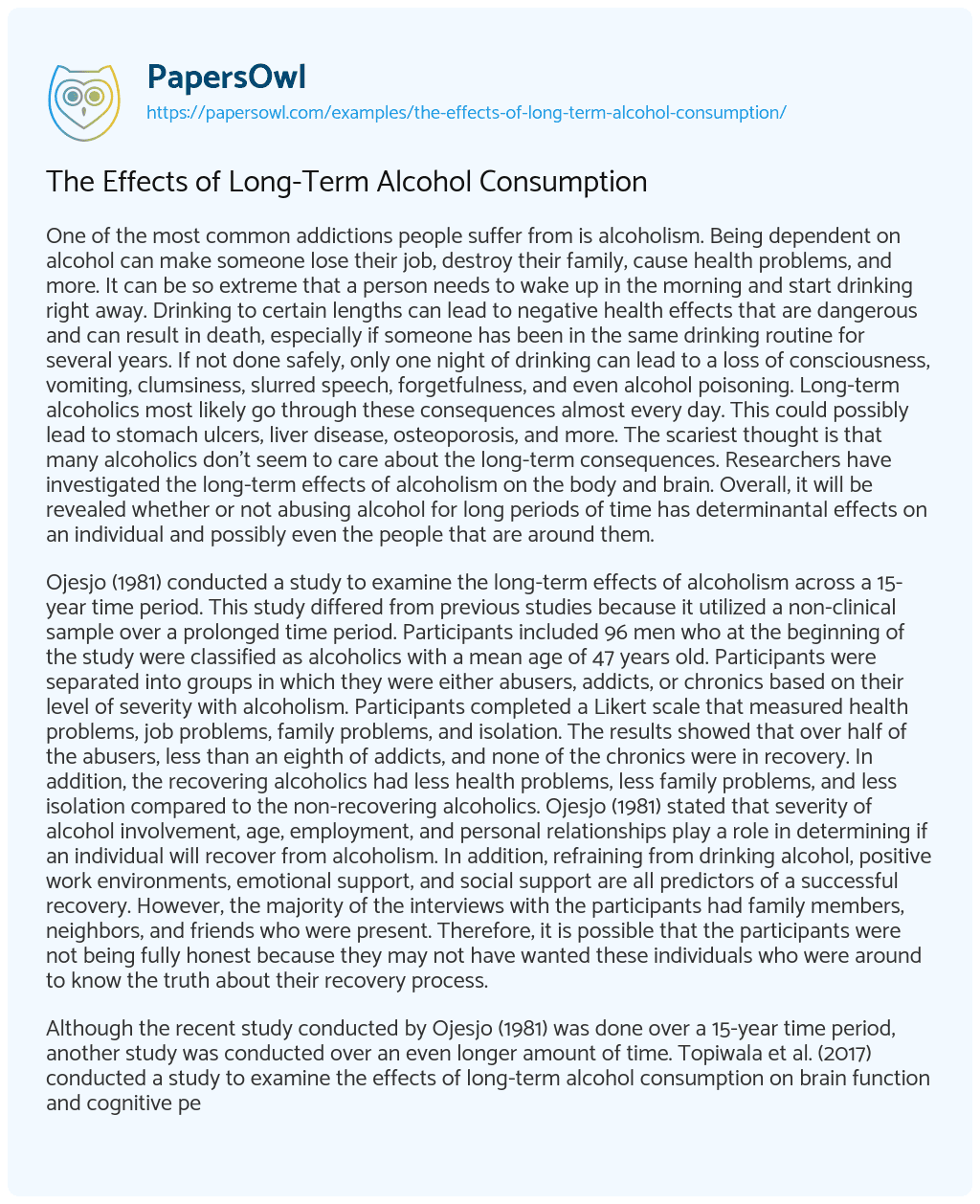 One of the most common addictions people suffer from is alcoholism. Being dependent on alcohol can make someone lose their job, destroy their family, cause health problems, and more. It can be so extreme that a person needs to wake up in the morning and start drinking right away. Drinking to certain lengths can lead to negative health effects that are dangerous and can result in death, especially if someone has been in the same drinking routine for several years. If not done safely, only one night of drinking can lead to a loss of consciousness, vomiting, clumsiness, slurred speech, forgetfulness, and even alcohol poisoning. Long-term alcoholics most likely go through these consequences almost every day. This could possibly lead to stomach ulcers, liver disease, osteoporosis, and more. The scariest thought is that many alcoholics don’t seem to care about the long-term consequences. Researchers have investigated the long-term effects of alcoholism on the body and brain. Overall, it will be revealed whether or not abusing alcohol for long periods of time has determinantal effects on an individual and possibly even the people that are around them.

Ojesjo (1981) conducted a study to examine the long-term effects of alcoholism across a 15-year time period. This study differed from previous studies because it utilized a non-clinical sample over a prolonged time period. Participants included 96 men who at the beginning of the study were classified as alcoholics with a mean age of 47 years old. Participants were separated into groups in which they were either abusers, addicts, or chronics based on their level of severity with alcoholism. Participants completed a Likert scale that measured health problems, job problems, family problems, and isolation. The results showed that over half of the abusers, less than an eighth of addicts, and none of the chronics were in recovery. In addition, the recovering alcoholics had less health problems, less family problems, and less isolation compared to the non-recovering alcoholics. Ojesjo (1981) stated that severity of alcohol involvement, age, employment, and personal relationships play a role in determining if an individual will recover from alcoholism. In addition, refraining from drinking alcohol, positive work environments, emotional support, and social support are all predictors of a successful recovery. However, the majority of the interviews with the participants had family members, neighbors, and friends who were present. Therefore, it is possible that the participants were not being fully honest because they may not have wanted these individuals who were around to know the truth about their recovery process.

Although the recent study conducted by Ojesjo (1981) was done over a 15-year time period, another study was conducted over an even longer amount of time. Topiwala et al. (2017) conducted a study to examine the effects of long-term alcohol consumption on brain function and cognitive performance over a 30-year time period. This study differed from previous studies because it not only looked at heavy alcohol consumption, but also moderate and light alcohol consumption. Participants included 527 adults (no gender information was provided) with a mean age of 43 years old. Participants went through a magnetic resonance imaging scan and completed lexical and semantic fluency tests during the scanning process. Participants then completed a questionnaire that measured the number of alcoholic drinks consumed each week and the number of times they were drunk each week. The results showed that the greater number of alcoholic drinks consumed was correlated with reduced grey matter, reduced white matter, and hippocampal atrophy. In addition, the greater number of alcoholic drinks consumed was correlated with greater decline in lexical fluency but not semantic fluency. Topiwala et al. (2017) stated that hippocampal atrophy is not only brought upon by Alzheimer’s disease, but also long-term heavy alcohol consumption. In addition, participants are able to improve their practice on semantic fluency tests more than they are able to on the lexical fluency tests possibly resulting in improved performance on those specific tests. However, participants had to write down the number of alcoholic drinks they consumed on average per week and if they drank too much, it was classified as unsafe drinking. Furthermore, it is possible that participants lied about the amount of alcohol they consumed because they did not want to appear to be heavily addicted to alcohol.

The past two studies done by Ojesjo (1981) and Topiwala et al. (2017) examined alcohol abuse among a vast amount of people over many years, but they did not investigate the effects of abstinence from alcohol. Brandt, Butters, Ryan, and Bayog (1983) conducted a study to examine the effects of long-term alcoholism and prolonged abstinence from alcohol on cognitive processes. This study differed from previous studies because it utilized a larger sample size and contained participants who were abstinent from alcohol for five years or more. Participants included 210 males ranging in age from 30 to 69 years old, all of who were either alcoholics or non-alcoholics. Participants completed five different tests that included verbal and nonverbal tasks to measure short-term memory. The results showed that alcoholics performed worse on all of the tasks. However, alcoholics who had been abstinent from alcohol for more than five years performed the same as non-alcoholics on all of the tasks except for one. Brandt et al. (1983) stated that when alcoholics begin the process of getting clean, there is an immediate level of improvement in mental status and this recovery in brain processes may continue for several years after. However, some of the participants included in the study were taking medications such as tranquilizers that could possibly cause drowsiness. Therefore, it is possible that these medications alone or even consumed with alcohol could have caused participants to perform worse.

Many of studies conducted to investigate alcohol abuse are often done on humans and not animals. Paula-Barbosa, Brandao, Madeira, and Cadete-Leite (1993) conducted a study to examine the effects of long-term alcohol consumption and withdrawal on the hippocampal formation in rats. This study differed from previous studies because it looked at withdrawal in rats who consumed heavy amounts of alcohol for a 6-month period. Subjects included 18 male Sprague-Dawley rats, all of who were 2 months old. Subjects were either fed sugar water, 20% ethanol solution for 18 months, or 20% ethanol solution for 12 months with the remaining 6 months being fed water. Subjects were then examined in the hippocampal region using a dissector method. The results showed that the ethanol fed subjects had a loss of granule, pyramidal, and hilar neurons compared to the subjects who were fed sugar water. In addition, subjects who were fed ethanol solution for only 12 months had thinner granule cell layers in the dentate gyrus compared to the subjects who were fed ethanol for 18 months. Paula-Barbosa et al. (1993) stated that withdrawal from alcohol does not stop the ongoing cell death and neuronal changes that results from long-term alcohol consumption. However, the subjects used in this study were only 2 months old and still at a young age. Furthermore, it is possible that these subjects had more changes in the brain due to the possibility that their brain may not be as fully developed as it would be if they were older.

Until this point, the studies reviewed examined the effects of alcohol on the abuser and not on the effects it can have on youth who are being raised by alcohol abusers. Christoffersen (2003) conducted a study to examine parental alcohol abuse and the long-term effects it has on children. This study differs from previous studies because it utilized a large national database of two different cohorts of children over a 15-year time period. Participants included 154,388 children (no gender or age information was provided) who were either born in 1966 or 1973. Participants information was collected from a population-based register system. Participants who were the parents of the children examined were associated with long-term alcohol abuse if they were hospitalized for a medical condition that resulted from alcohol. The results showed that parental alcohol abuse led to the children being more likely to become alcoholics or drug addicts, attempt suicide or commit suicide, develop mental illnesses, and be convicted of violent crimes. In addition, these issues were more severe for children if their mother was abusing alcohol compared to the father abusing alcohol. Christoffersen (2003) stated that children are dependent on the emotional state of their parents and learn to form their identity based off of how their parents behave. However, the data from this study was gathered from a register system and did not include any interviews or questionnaires from the participants. Furthermore, it is possible that the information obtained from the register system was inaccurate due to over reporting or under reporting of certain information.

Any kind of addiction is emotionally and physically painful for an individual. It is evident that alcohol can have an extreme amount of negative side effects whether it is targeting the brain or the body. As it has been revealed, alcoholism not only has a negative effect on the abuser, but also on the people around them. Drinking alcohol is very common and an acceptable activity in society. However, it is important to raise awareness about this issue that many people might overlook. Alcohol abuse may start at a young age and continue through adulthood resulting in many health issues. Creating classes to bring this issue to light might make an individual think twice about drinking more than what is considered healthy. Even creating a social media page to target younger people who have better access to the information can help make them more aware. Overall, if people are not being informed about the negative things that could possibly result from alcohol abuse, the number of health problems and deaths from overuse will continue to increase.

The Effects of Long-Term Alcohol Consumption. (2021, May 14). Retrieved from https://papersowl.com/examples/the-effects-of-long-term-alcohol-consumption/