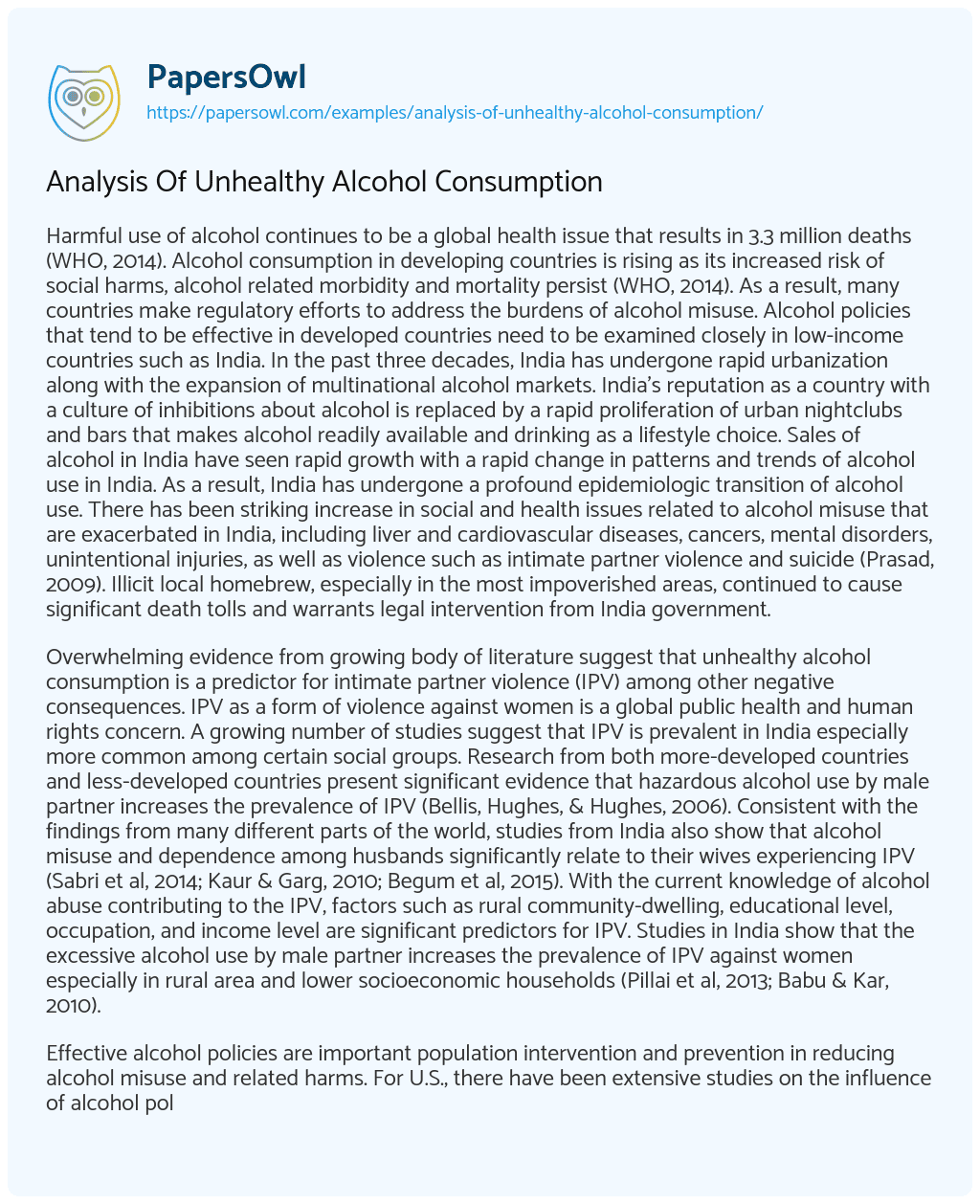 Harmful use of alcohol continues to be a global health issue that results in 3.3 million deaths (WHO, 2014). Alcohol consumption in developing countries is rising as its increased risk of social harms, alcohol related morbidity and mortality persist (WHO, 2014). As a result, many countries make regulatory efforts to address the burdens of alcohol misuse. Alcohol policies that tend to be effective in developed countries need to be examined closely in low-income countries such as India. In the past three decades, India has undergone rapid urbanization along with the expansion of multinational alcohol markets. India’s reputation as a country with a culture of inhibitions about alcohol is replaced by a rapid proliferation of urban nightclubs and bars that makes alcohol readily available and drinking as a lifestyle choice. Sales of alcohol in India have seen rapid growth with a rapid change in patterns and trends of alcohol use in India. As a result, India has undergone a profound epidemiologic transition of alcohol use. There has been striking increase in social and health issues related to alcohol misuse that are exacerbated in India, including liver and cardiovascular diseases, cancers, mental disorders, unintentional injuries, as well as violence such as intimate partner violence and suicide (Prasad, 2009). Illicit local homebrew, especially in the most impoverished areas, continued to cause significant death tolls and warrants legal intervention from India government.

Overwhelming evidence from growing body of literature suggest that unhealthy alcohol consumption is a predictor for intimate partner violence (IPV) among other negative consequences. IPV as a form of violence against women is a global public health and human rights concern. A growing number of studies suggest that IPV is prevalent in India especially more common among certain social groups. Research from both more-developed countries and less-developed countries present significant evidence that hazardous alcohol use by male partner increases the prevalence of IPV (Bellis, Hughes, & Hughes, 2006). Consistent with the findings from many different parts of the world, studies from India also show that alcohol misuse and dependence among husbands significantly relate to their wives experiencing IPV (Sabri et al, 2014; Kaur & Garg, 2010; Begum et al, 2015). With the current knowledge of alcohol abuse contributing to the IPV, factors such as rural community-dwelling, educational level, occupation, and income level are significant predictors for IPV. Studies in India show that the excessive alcohol use by male partner increases the prevalence of IPV against women especially in rural area and lower socioeconomic households (Pillai et al, 2013; Babu & Kar, 2010).

Despite these policy efforts, there has been a drastic increase of alcohol consumption in India in both rural and urban area (Poduthase & Vellappally, 2016; Murthy, Manjunatha, Subodh, Chand, & Benegal, 2010). According to the nationwide studies on substance use prevalence, the changing trends from 1998 to 2006 surveys show an increase in alcohol use among men from 17% to 31%; women in India report lower prevalence of alcohol consumptions with less than 3% in multiple national surveys (Murthy, Manjunatha, Subodh, Chand, & Benegal, 2010). Studies from India consistently show that alcohol misuse is more common in men in lower socioeconomic groups (Pillai et al, 2013). Unhealthy alcohol consumptions include misuse, dependence, and binge drinking. Consequently, there are negative health and social effects associated with alcohol.

One study suggests that alcohol regulations such as restrictions on alcohol availability are effective policies to address the alarming negative health and socioeconomic burden linked to unhealthy consumption of alcohol (Mahal, 2000). However, other findings suggest that prohibition policies appear to have little effect on alcohol use by men (Subramanian, Nandy, Irving, Gordon, & Smith, 2005). While the literature on the effect of alcohol policies in India are sparse, there are more apparent gaps in the literature on the effects of alcohol policies on domestic violence outcomes. Further exploration of alcohol policy in India is imperative to further understand its association with hazardous alcohol consumption and IPV against women.

To advance the understanding of the role of alcohol consumption in relations to intimate partner violence, the study combines individual-level data from national survey with available state prohibition policies. This study examines the alcohol prohibition policy differences across different states and union territories in India to assess its relationship with alcohol consumption and intimate partner violence among married couple.

This study utilizes the data sources from the 2005-2006 and 2015-2016 waves of the India National Family Health Survey (NFHS). Indian Demographic and Health Survey (DHS) collected data as a part of a nationally representative household-based health surveillance system. NFHS provides information on state and national level on various topics including alcohol consumption, domestic violence, and other socio demographic factors. Each state alcohol regulations is compared to the relevant spousal violence and alcohol consumption data from NHFS to observe any relationships between state-level alcohol control policies and IPV in India.

The alcohol policies were collected from a comprehensive review of the existing literature and database. For this study, we have identified the alcohol prohibition regulations by each state and union territories in India from 1990s to 2016. The range of date for alcohol policy covers the two waves of NFHS collection period from 2005 to 2016. For each state and union territories, specific alcohol prohibition policies were collected and categorized into three domains: no alcohol ban, partial ban, and complete prohibition. For a comprehensive review, legal statutes and amendments pertaining to alcohol access and availability for all states and union territories were collected as part of the policy dataset. In addition to the independent policy review, existing alcohol regulation report by the Public Health Foundation of India and previous literature were further examined and compared to increase reliability and validity (cite PHFI, Rahman, Mahar).