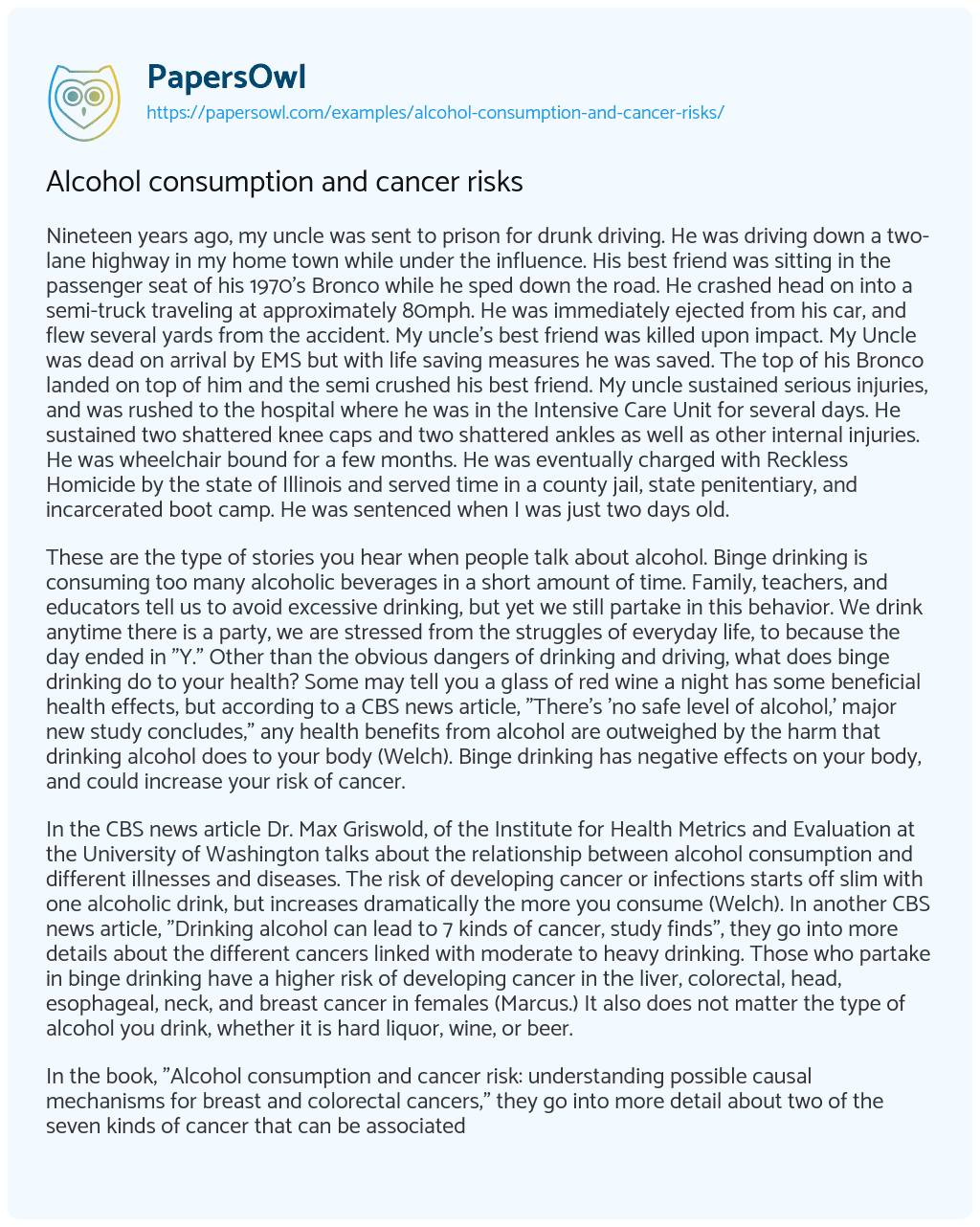 Nineteen years ago, my uncle was sent to prison for drunk driving. He was driving down a two-lane highway in my home town while under the influence. His best friend was sitting in the passenger seat of his 1970’s Bronco while he sped down the road. He crashed head on into a semi-truck traveling at approximately 80mph. He was immediately ejected from his car, and flew several yards from the accident. My uncle’s best friend was killed upon impact. My Uncle was dead on arrival by EMS but with life saving measures he was saved. The top of his Bronco landed on top of him and the semi crushed his best friend. My uncle sustained serious injuries, and was rushed to the hospital where he was in the Intensive Care Unit for several days. He sustained two shattered knee caps and two shattered ankles as well as other internal injuries. He was wheelchair bound for a few months. He was eventually charged with Reckless Homicide by the state of Illinois and served time in a county jail, state penitentiary, and incarcerated boot camp. He was sentenced when I was just two days old.

These are the type of stories you hear when people talk about alcohol. Binge drinking is consuming too many alcoholic beverages in a short amount of time. Family, teachers, and educators tell us to avoid excessive drinking, but yet we still partake in this behavior. We drink anytime there is a party, we are stressed from the struggles of everyday life, to because the day ended in “Y.” Other than the obvious dangers of drinking and driving, what does binge drinking do to your health? Some may tell you a glass of red wine a night has some beneficial health effects, but according to a CBS news article, “There’s ‘no safe level of alcohol,’ major new study concludes,” any health benefits from alcohol are outweighed by the harm that drinking alcohol does to your body (Welch). Binge drinking has negative effects on your body, and could increase your risk of cancer.

In the CBS news article Dr. Max Griswold, of the Institute for Health Metrics and Evaluation at the University of Washington talks about the relationship between alcohol consumption and different illnesses and diseases. The risk of developing cancer or infections starts off slim with one alcoholic drink, but increases dramatically the more you consume (Welch). In another CBS news article, “Drinking alcohol can lead to 7 kinds of cancer, study finds”, they go into more details about the different cancers linked with moderate to heavy drinking. Those who partake in binge drinking have a higher risk of developing cancer in the liver, colorectal, head, esophageal, neck, and breast cancer in females (Marcus.) It also does not matter the type of alcohol you drink, whether it is hard liquor, wine, or beer.

In the book, “Alcohol consumption and cancer risk: understanding possible causal mechanisms for breast and colorectal cancers,” they go into more detail about two of the seven kinds of cancer that can be associated with alcohol intake. In the study, they looked at several key factors how alcohol may impact the development of cancer tissues. The study looked at fifteen animal and five human breast tissue samples, and nineteen animal and one human colorectal tissue samples (Oyesanmi.) In the colorectal tissue study, twelve of the nineteen animals had a carcinogen injected into the sample (Oyesanmi.) In both news articles, they state that there is a link between the amount of alcohol you consume and cancer types, but in this study, which was done in 2010 says “…the exact connection or connections remain unclear” (Oyesanmi.) Only year’s later, scientist found a correlation between binge drinking and cancer risks.

In the study, “Alcohol consumption as a cause of cancer,” by Jennie Connor, she looked at the causal relationship that is between alcohol and cancer. She looked at different studies and compared the results. After reviewing several studies, there is a link in alcohol consumption and seven different kinds of cancers: colon, rectum, breast, oesophagus, larynx, oropharynx, and liver (Connor.) These are the seven same cancers that were mentioned in the “Drinking alcohol can lead to 7 kinds of cancer, study finds” article. In the study, they go into detail about how limiting your alcohol use can actually reverse your risk in liver, laryngeal, and pharyngeal cancers (Connor.) In this collection of studies, it also agrees with the statement that it does not matter what type of alcohol you drink, they all have the same risks.

In both these studies, there was skepticism about the authenticity of information of the test subjects. They also address how family history of certain cancers can put some individuals at a higher risk. In those cases, they would not be able to differentiate if the risk was higher from alcohol consumption, predisposition, or a combination of the two. The study that was done eight years ago did not know whether or not alcohol had a connection to cancer, but the studies done last year says there is. Just like it states in the news article, it is a relatively new thing that has come into the light.

In the end, binge drinking is linked to at least seven different types of cancer. Multiple studies have been done on it over the years, but there is still skepticism if it is strictly alcohol related. Through several studies, there is a correlation of alcohol consumption and cancer risks in seven different parts of your body.

Dangers of Drinking and Driving