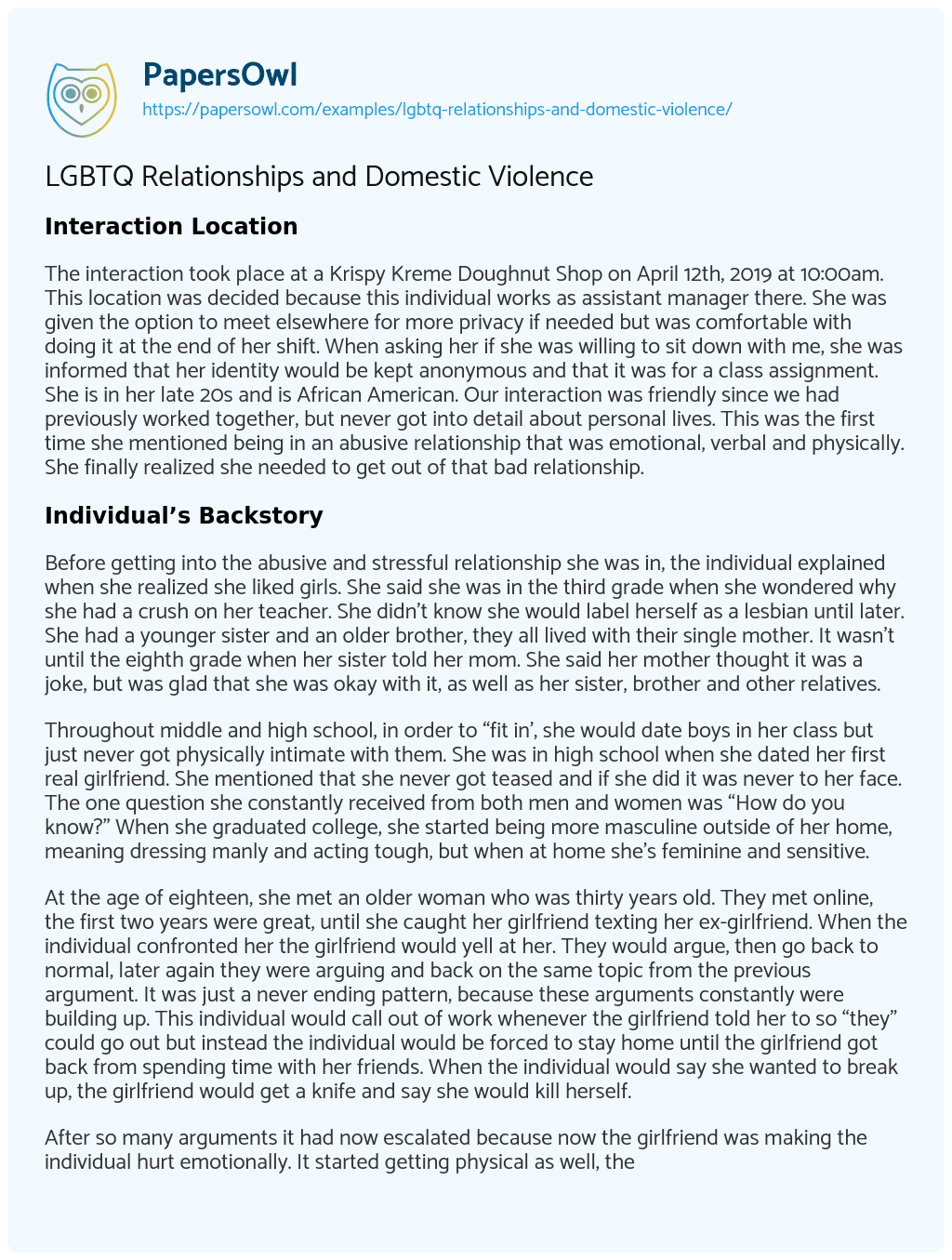 The interaction took place at a Krispy Kreme Doughnut Shop on April 12th, 2019 at 10:00am. This location was decided because this individual works as assistant manager there. She was given the option to meet elsewhere for more privacy if needed but was comfortable with doing it at the end of her shift. When asking her if she was willing to sit down with me, she was informed that her identity would be kept anonymous and that it was for a class assignment. She is in her late 20s and is African American. Our interaction was friendly since we had previously worked together, but never got into detail about personal lives. This was the first time she mentioned being in an abusive relationship that was emotional, verbal and physically. She finally realized she needed to get out of that bad relationship.

Before getting into the abusive and stressful relationship she was in, the individual explained when she realized she liked girls. She said she was in the third grade when she wondered why she had a crush on her teacher. She didn’t know she would label herself as a lesbian until later. She had a younger sister and an older brother, they all lived with their single mother. It wasn’t until the eighth grade when her sister told her mom. She said her mother thought it was a joke, but was glad that she was okay with it, as well as her sister, brother and other relatives.

Throughout middle and high school, in order to “fit in’, she would date boys in her class but just never got physically intimate with them. She was in high school when she dated her first real girlfriend. She mentioned that she never got teased and if she did it was never to her face. The one question she constantly received from both men and women was “How do you know?” When she graduated college, she started being more masculine outside of her home, meaning dressing manly and acting tough, but when at home she’s feminine and sensitive.

After so many arguments it had now escalated because now the girlfriend was making the individual hurt emotionally. It started getting physical as well, the girlfriend would choke, slap and try to slam her to the ground. She would prevent the individual from leaving by taking her keys, phone and wallet. One night outside their apartment police got called for too much yelling. Before the arguments and fights, the individual did not finish college, she left so she could spend time with her girlfriend. The girlfriend really just wanted her close, so she could keep an eye on her. The girlfriend had brought up the idea of both enrolling to the same nearby college, but they never got to applying for admission. The individual finally left after almost 4 years of being together, she moved in with her godmother. The only people she reached out for help was her best friend.

Reading this we are all probably thinking ‘why don’t you just leave?” this individual deep down knew she should not have been treated like this. She believed she was giving her girlfriend all the love and respect she deserved, but she wasn’t receiving it back. The constant arguments became a routine with this couple that it made it hard to identify this relationship as abusive and therefore there was no reason for the individual to seek help (Ricks & Vaughan, 2002). The emotional abuse often destroys one’s self-esteem, she believed that if she waited, things would change but it never did. Every now and then the girlfriend would do something nice or state she would never do it again but again it became a routine.

Carpenter (2017) explained that “ violence between LGBTQ partners is difficult to see for many reasons. They are often distanced from their families and friends due to prejudice, a couple may be more isolated from outside observers who might intervene and help a victim.” Like any person in a relationship they want others to see this ‘perfect” couple. It’s not the same for these individuals when they have the world, their community and sometimes family criticizing, so it just puts more pressure to hide anything else that is negative between them. Due religion families are torn apart because these individuals are not accepted. The individual and her wife today are not able to attend their church because people there do want them to sit beside each other and hold hands. It breaks her heart reading articles online of same sex couples needing funding in order pay hospital bills to help their sick child and people don’t want to help them.

Many people believe that incidents of domestic violence are less severe for anyone who is LGBTQ but that is not true. This can happen to anyone in a relationship and it can be equally or more damaging. Studies show that gay men and bisexual women are more likely to experience more severe physical violence that can involve being beaten, burned or choked (Rothman, Exner & Baughman, 2011). A common belief is that men are abusers and women are not. It could be hard to ask for help because others may think that lesbian relationships are safe and that it would incapable of there being any harm. Another stereotype is that people assume it is easier for LGBTQ individuals to leave from an abusive relationship or that gay families will raise their children to be gay, and that is not the case.

According to Foley (2015) same-sex parents and opposite-sex parents all share the same flaw. There is no correct parenting but there are good and bad parenting and there is no negative impact on the children of same-sex couples. The individual stated that one thing that gets frustrating is having a baby. Her wife and herself have been trying to have a baby for over a year now. Money is tight, but she has found someone willing to be her sperm donor. She is doing this by doing the intracervical insemination method and this involves injecting semen vaginally close to the cervix. Also known as the turkey baster method.

When working with individuals in the LGBTQ community, a social worker must acknowledge the ways in which oppression, social influence and discrimination impact the clients. A social worker has an obligation to be culturally knowledgeable and sensitive to the unique needs of the client. They must understand that the discrimination they may have face or the pressure they feel can put them at greater risk for emotional struggles like depression, anxiety, substance abuse and even lead to suicide. A social worker should want to prevent any more abusive relationships to occur, so they should provide the client with information on local support groups, online blogs, anything that will provide some sort of support and relief. When asked about feelings, the individual responded saying how she often thought about whether she should give up on life. She thought finding love and her dream of having a family would never come true. During the time after officially separating from her abusive and controlling ex-girlfriend she focused on working more. She wishes she would’ve finished college, and as her social worker, she should be encouraged that she can still go back to school and get a degree or certifications that will help in any interest she may want to pursue in. She has a voice now, because one strength she gained is to stand up for herself. Another great help would be finding her some resources and organizations she can look into to help with her stress. She often blames stress from work to cause her to not be able to get pregnant.

After this interaction, there are so many things that were proved wrong. Not all individuals in the LGBTQ community go through the same thing. She went through some hard times but nothing as bad as it could’ve been. She had a great support system and still does. She was lucky to not have been harassed online or publicly, she was never homeless or refused a job position. This interaction made it clear that when it comes to relationships there are always problems. Every relationship is different, it can be easy to judge or compare your relationship to others but in reality, domestic violence can happen to anyone. It is overlooked, excused and sometimes denied. Noticing and acknowledging the signs of an abusive relationship is the first step to ending it (Yasmin, 2017). It is rarely talked about and it often causes people to not realize that their relationship is an abusive one.

LGBTQ Relationships and Domestic Violence. (2021, May 14). Retrieved from https://papersowl.com/examples/lgbtq-relationships-and-domestic-violence/