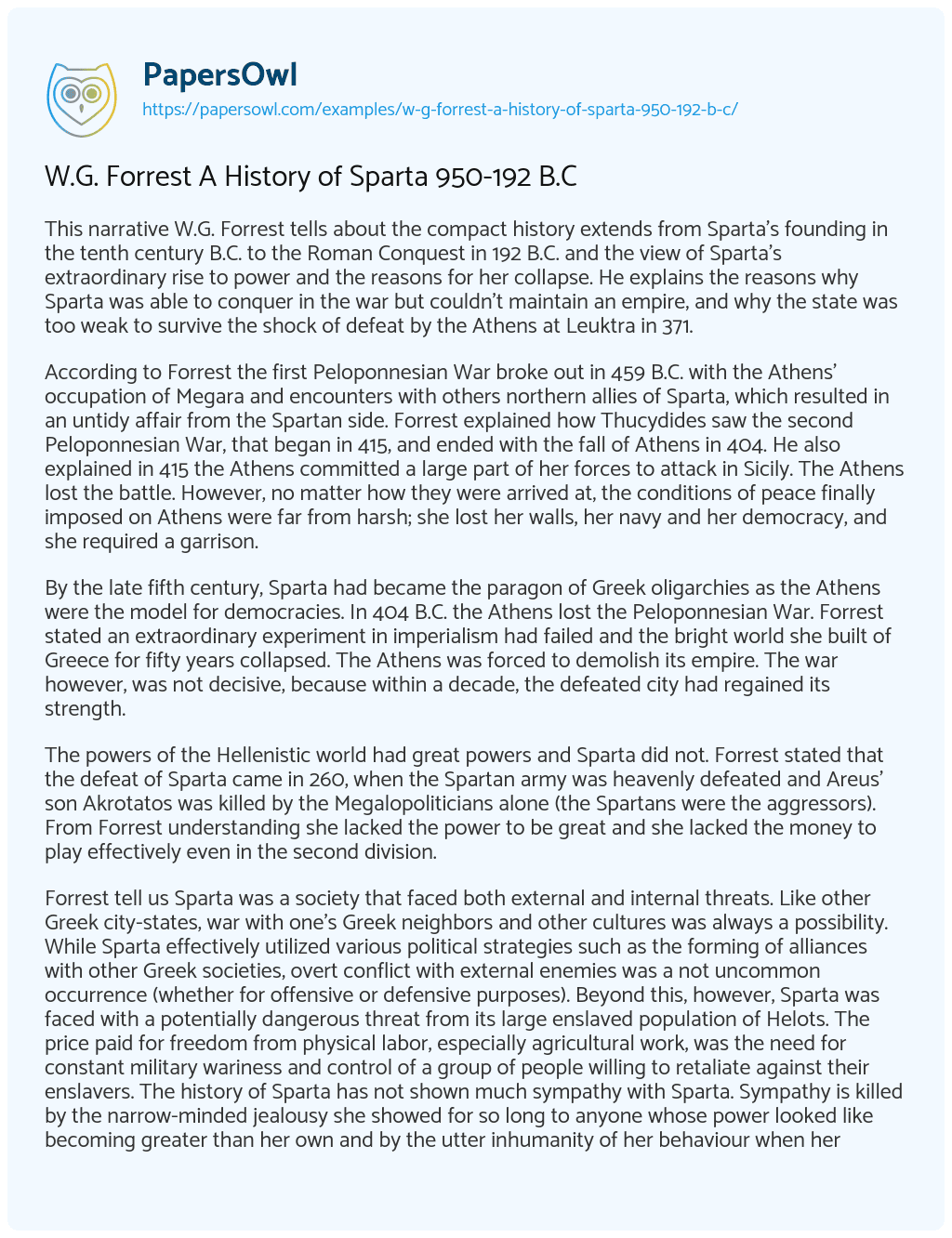 This narrative W.G. Forrest tells about the compact history extends from Sparta’s founding in the tenth century B.C. to the Roman Conquest in 192 B.C. and the view of Sparta’s extraordinary rise to power and the reasons for her collapse. He explains the reasons why Sparta was able to conquer in the war but couldn’t maintain an empire, and why the state was too weak to survive the shock of defeat by the Athens at Leuktra in 371.

According to Forrest the first Peloponnesian War broke out in 459 B.C. with the Athens’ occupation of Megara and encounters with others northern allies of Sparta, which resulted in an untidy affair from the Spartan side. Forrest explained how Thucydides saw the second Peloponnesian War, that began in 415, and ended with the fall of Athens in 404. He also explained in 415 the Athens committed a large part of her forces to attack in Sicily. The Athens lost the battle. However, no matter how they were arrived at, the conditions of peace finally imposed on Athens were far from harsh; she lost her walls, her navy and her democracy, and she required a garrison.

By the late fifth century, Sparta had became the paragon of Greek oligarchies as the Athens were the model for democracies. In 404 B.C. the Athens lost the Peloponnesian War. Forrest stated an extraordinary experiment in imperialism had failed and the bright world she built of Greece for fifty years collapsed. The Athens was forced to demolish its empire. The war however, was not decisive, because within a decade, the defeated city had regained its strength.

The powers of the Hellenistic world had great powers and Sparta did not. Forrest stated that the defeat of Sparta came in 260, when the Spartan army was heavenly defeated and Areus’ son Akrotatos was killed by the Megalopoliticians alone (the Spartans were the aggressors). From Forrest understanding she lacked the power to be great and she lacked the money to play effectively even in the second division.

Forrest tell us Sparta was a society that faced both external and internal threats. Like other Greek city-states, war with one’s Greek neighbors and other cultures was always a possibility. While Sparta effectively utilized various political strategies such as the forming of alliances with other Greek societies, overt conflict with external enemies was a not uncommon occurrence (whether for offensive or defensive purposes). Beyond this, however, Sparta was faced with a potentially dangerous threat from its large enslaved population of Helots. The price paid for freedom from physical labor, especially agricultural work, was the need for constant military wariness and control of a group of people willing to retaliate against their enslavers. The history of Sparta has not shown much sympathy with Sparta. Sympathy is killed by the narrow-minded jealousy she showed for so long to anyone whose power looked like becoming greater than her own and by the utter inhumanity of her behaviour when her own power was supreme.