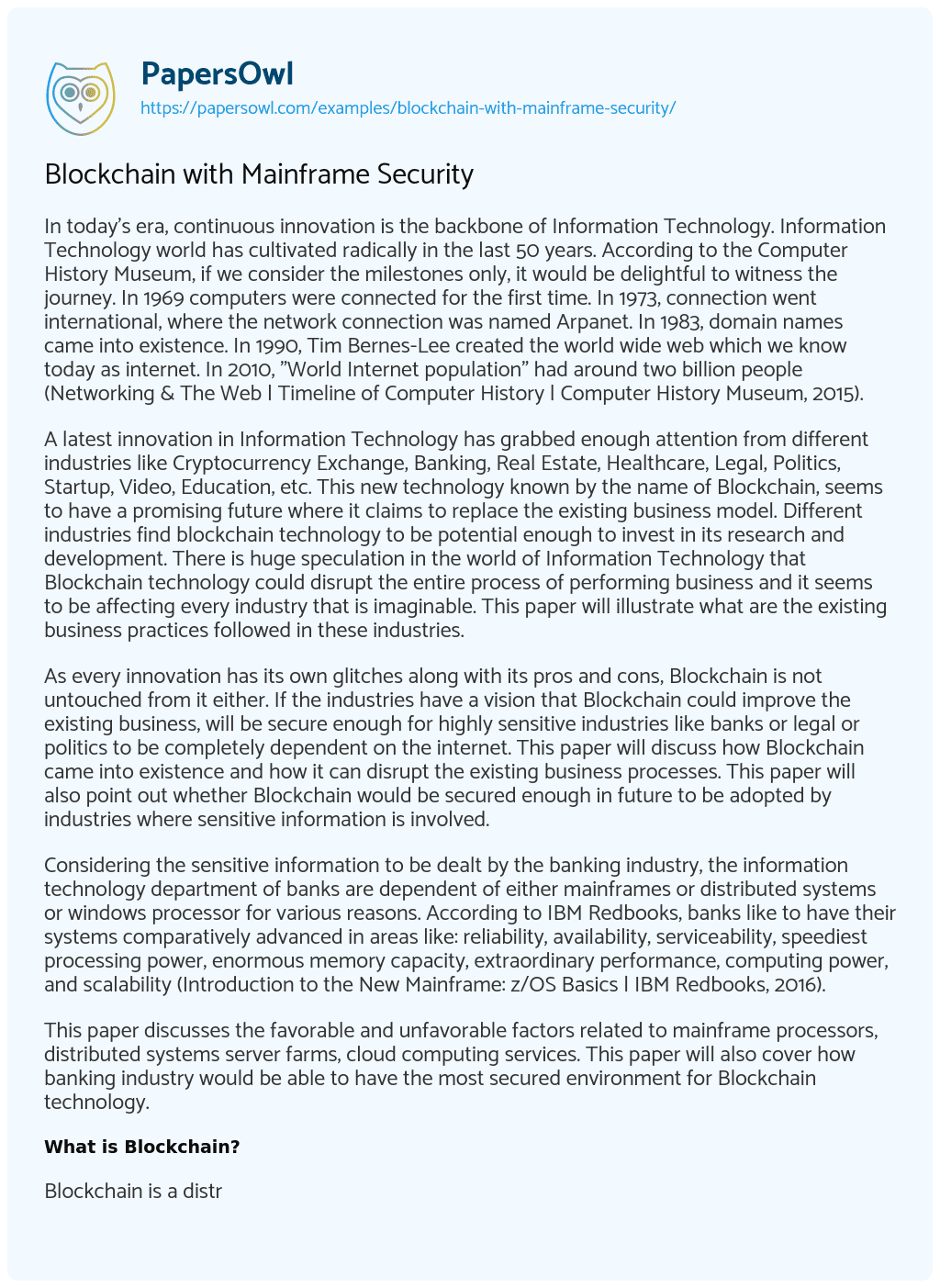 In today’s era, continuous innovation is the backbone of Information Technology. Information Technology world has cultivated radically in the last 50 years. According to the Computer History Museum, if we consider the milestones only, it would be delightful to witness the journey. In 1969 computers were connected for the first time. In 1973, connection went international, where the network connection was named Arpanet. In 1983, domain names came into existence. In 1990, Tim Bernes-Lee created the world wide web which we know today as internet. In 2010, “World Internet population” had around two billion people (Networking & The Web | Timeline of Computer History | Computer History Museum, 2015).

A latest innovation in Information Technology has grabbed enough attention from different industries like Cryptocurrency Exchange, Banking, Real Estate, Healthcare, Legal, Politics, Startup, Video, Education, etc. This new technology known by the name of Blockchain, seems to have a promising future where it claims to replace the existing business model. Different industries find blockchain technology to be potential enough to invest in its research and development. There is huge speculation in the world of Information Technology that Blockchain technology could disrupt the entire process of performing business and it seems to be affecting every industry that is imaginable. This paper will illustrate what are the existing business practices followed in these industries.

As every innovation has its own glitches along with its pros and cons, Blockchain is not untouched from it either. If the industries have a vision that Blockchain could improve the existing business, will be secure enough for highly sensitive industries like banks or legal or politics to be completely dependent on the internet. This paper will discuss how Blockchain came into existence and how it can disrupt the existing business processes. This paper will also point out whether Blockchain would be secured enough in future to be adopted by industries where sensitive information is involved.

Considering the sensitive information to be dealt by the banking industry, the information technology department of banks are dependent of either mainframes or distributed systems or windows processor for various reasons. According to IBM Redbooks, banks like to have their systems comparatively advanced in areas like: reliability, availability, serviceability, speediest processing power, enormous memory capacity, extraordinary performance, computing power, and scalability (Introduction to the New Mainframe: z/OS Basics | IBM Redbooks, 2016).

This paper discusses the favorable and unfavorable factors related to mainframe processors, distributed systems server farms, cloud computing services. This paper will also cover how banking industry would be able to have the most secured environment for Blockchain technology.

Blockchain is a distributed ledger technology which has a peer-to-peer network that enables everybody in the network to have real-time access to the transactions incurred within the network (Fyrigou-Koulouri, 2018). Blockchain has a decentralized database, so transactions can be added to the network, but it cannot be altered or modified once it is approved and it is part of the network. Database in the blockchain technology is decentralized which ensures that everybody has access to the data and there is no body to own the data repository.

Blockchain is considered to disrupt and replace the existing business process models in almost every major industry. As per the article by Hawser (2018), Blockchain would have an impact on all those industries which deal with exchange of valuables, transactions and payment. In the next couple of decades, Blockchain will be the biggest transformation in the FinTech industry. European banks like HSBC, KBC, Natixis, Nordea, Rabobank, Santander, Societe Generale, Deutsche Bank and UniCredit have come together to research and develop the Blockchain technology and have common grounds for the whole banking industry (Hawser, 2018).

What is FinTech industry?

Around a decade ago, Cooperative FinTech industry has emerged a concept of online mobile banking. It made lives easier for many corporations, individuals having busy lives and for those people who do not have access to local banks branches in under-developed countries. Innovation of online mobile banking in the FinTech industry has made a huge impact all over the world where 1.2 billion people got the access to banking services (Kursh & Gold, 2016).

As Kursh & Gold (2016) have also mentioned that Disruptive FinTech industry’s next huge innovation is Blockchain. It will introduce a new business processes model for every industry which is in touch with finance and technology. There is a group of sixty financial institutions who have come together to invest in the development of Blockchain technology for the finance world (Kursh & Gold, 2016).

Blockchain with Mainframe Security. (2019, May 02). Retrieved from https://papersowl.com/examples/blockchain-with-mainframe-security/

Why you should Invest in Blockchain?

How to Invest in Blockchain Technology