The Illusion of the American Dream 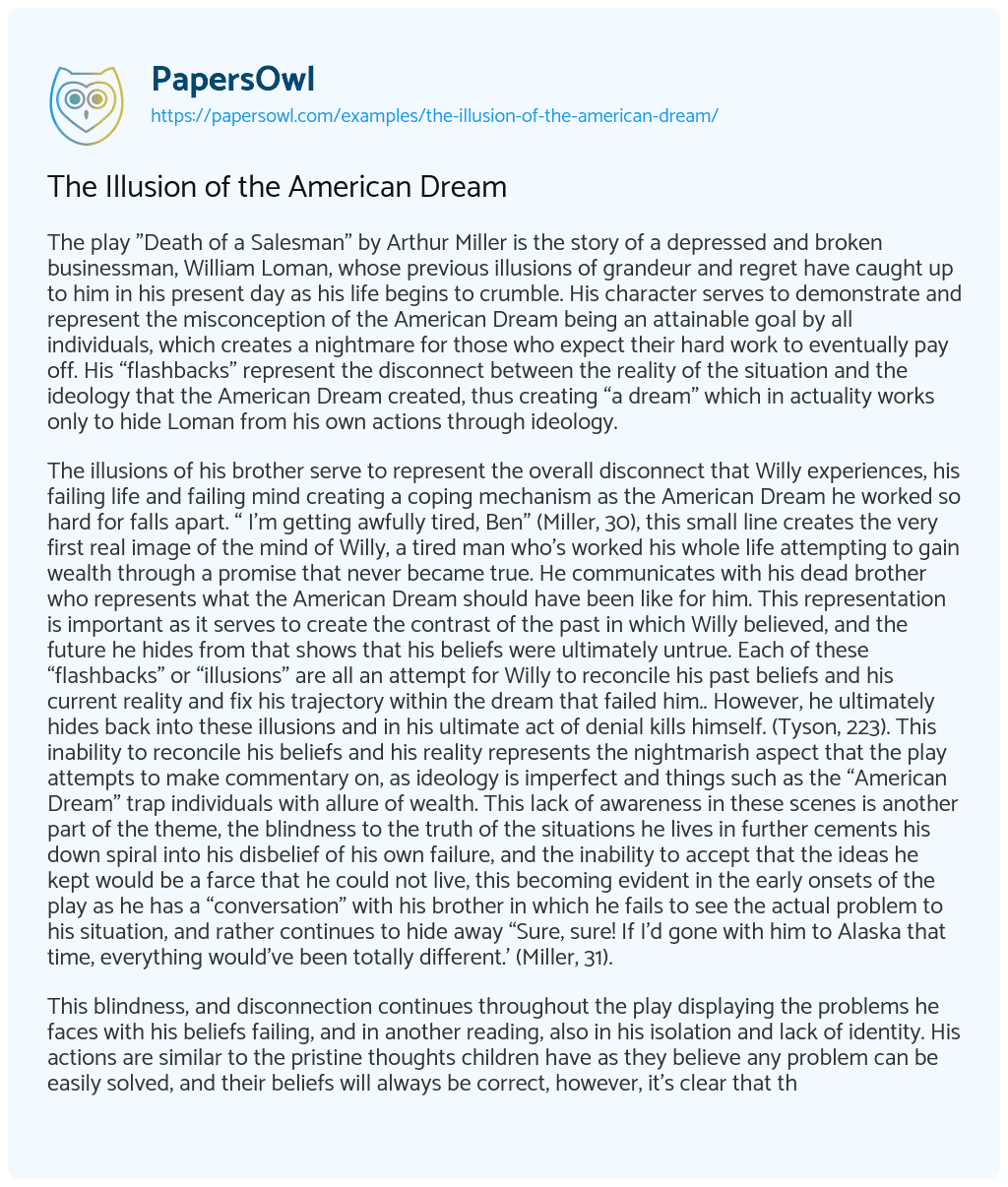 The play “Death of a Salesman” by Arthur Miller is the story of a depressed and broken businessman, William Loman, whose previous illusions of grandeur and regret have caught up to him in his present day as his life begins to crumble. His character serves to demonstrate and represent the misconception of the American Dream being an attainable goal by all individuals, which creates a nightmare for those who expect their hard work to eventually pay off. His “flashbacks” represent the disconnect between the reality of the situation and the ideology that the American Dream created, thus creating “a dream” which in actuality works only to hide Loman from his own actions through ideology.

The illusions of his brother serve to represent the overall disconnect that Willy experiences, his failing life and failing mind creating a coping mechanism as the American Dream he worked so hard for falls apart. “ I’m getting awfully tired, Ben” (Miller, 30), this small line creates the very first real image of the mind of Willy, a tired man who’s worked his whole life attempting to gain wealth through a promise that never became true. He communicates with his dead brother who represents what the American Dream should have been like for him. This representation is important as it serves to create the contrast of the past in which Willy believed, and the future he hides from that shows that his beliefs were ultimately untrue. Each of these “flashbacks” or “illusions” are all an attempt for Willy to reconcile his past beliefs and his current reality and fix his trajectory within the dream that failed him.. However, he ultimately hides back into these illusions and in his ultimate act of denial kills himself. (Tyson, 223). This inability to reconcile his beliefs and his reality represents the nightmarish aspect that the play attempts to make commentary on, as ideology is imperfect and things such as the “American Dream” trap individuals with allure of wealth. This lack of awareness in these scenes is another part of the theme, the blindness to the truth of the situations he lives in further cements his down spiral into his disbelief of his own failure, and the inability to accept that the ideas he kept would be a farce that he could not live, this becoming evident in the early onsets of the play as he has a “conversation” with his brother in which he fails to see the actual problem to his situation, and rather continues to hide away “Sure, sure! If I’d gone with him to Alaska that time, everything would’ve been totally different.’ (Miller, 31).

This blindness, and disconnection continues throughout the play displaying the problems he faces with his beliefs failing, and in another reading, also in his isolation and lack of identity. His actions are similar to the pristine thoughts children have as they believe any problem can be easily solved, and their beliefs will always be correct, however, it’s clear that the reasoning for the American Dream being a nightmare for Willy is exactly this. The trauma suffered at a young age from losing his father created a vacuum and inability to grow, and caused him to latch on to vague ideas his family presented. This ultimately results in blindness towards why he, and his children, fail to continue forward, and rather fall back as they must face that these childlike illusions, such as the dream, ultimately have created a nightmare for everyone involved.

The Illusion of the American Dream. (2021, Mar 18). Retrieved from https://papersowl.com/examples/the-illusion-of-the-american-dream/