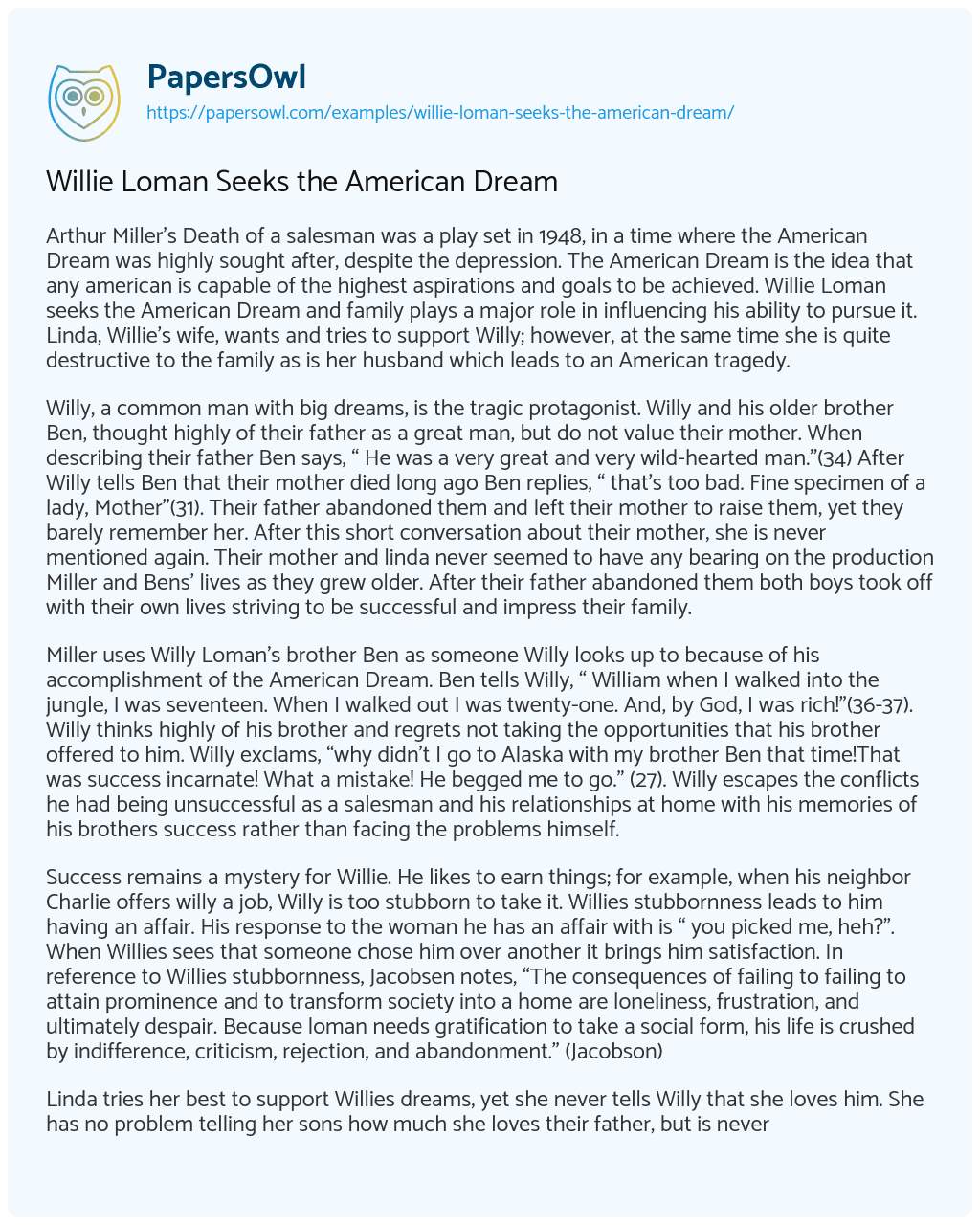 Arthur Miller’s Death of a salesman was a play set in 1948, in a time where the American Dream was highly sought after, despite the depression. The American Dream is the idea that any american is capable of the highest aspirations and goals to be achieved. Willie Loman seeks the American Dream and family plays a major role in influencing his ability to pursue it. Linda, Willie’s wife, wants and tries to support Willy; however, at the same time she is quite destructive to the family as is her husband which leads to an American tragedy.

Willy, a common man with big dreams, is the tragic protagonist. Willy and his older brother Ben, thought highly of their father as a great man, but do not value their mother. When describing their father Ben says, “ He was a very great and very wild-hearted man.”(34) After Willy tells Ben that their mother died long ago Ben replies, “ that’s too bad. Fine specimen of a lady, Mother”(31). Their father abandoned them and left their mother to raise them, yet they barely remember her. After this short conversation about their mother, she is never mentioned again. Their mother and linda never seemed to have any bearing on the production Miller and Bens’ lives as they grew older. After their father abandoned them both boys took off with their own lives striving to be successful and impress their family.

Miller uses Willy Loman’s brother Ben as someone Willy looks up to because of his accomplishment of the American Dream. Ben tells Willy, “ William when I walked into the jungle, I was seventeen. When I walked out I was twenty-one. And, by God, I was rich!”(36-37). Willy thinks highly of his brother and regrets not taking the opportunities that his brother offered to him. Willy exclams, “why didn’t I go to Alaska with my brother Ben that time!That was success incarnate! What a mistake! He begged me to go.” (27). Willy escapes the conflicts he had being unsuccessful as a salesman and his relationships at home with his memories of his brothers success rather than facing the problems himself.

Success remains a mystery for Willie. He likes to earn things; for example, when his neighbor Charlie offers willy a job, Willy is too stubborn to take it. Willies stubbornness leads to him having an affair. His response to the woman he has an affair with is “ you picked me, heh?”. When Willies sees that someone chose him over another it brings him satisfaction. In reference to Willies stubbornness, Jacobsen notes, “The consequences of failing to failing to attain prominence and to transform society into a home are loneliness, frustration, and ultimately despair. Because loman needs gratification to take a social form, his life is crushed by indifference, criticism, rejection, and abandonment.” (Jacobson)

Linda tries her best to support Willies dreams, yet she never tells Willy that she loves him. She has no problem telling her sons how much she loves their father, but is never seen expressing that love to him. Willy desperately needs validation for what he is doing whether it’s good or bad, because he never had his father for that. Unfortunately, linda does not give any type of validation to Willy. Rather, she supports him at all costs. Linda constantly reminds Willy of his future with his company. In actuality, he doesn’t have a future with his company, but Linda wants him to stay. In describing Linda, Miller says, “ she regards Willy as being very brittle, very easily destroyed; and she’s got to prop him up or he’ll collapse.”(Miller). The play does not state that Willy has a mental disease, but Miller even notes, “In a way it’s like dealing with a sick person”(Miller).

Willy’s inability to accept reality brings conflict to his life and his family. In reference to willies uncertainty to accept reality, Jesmin states, “ desperate and excessive attempts to attain their desired image and to get approval of self-worth in society detach them from their true identity and make them lead a life of failure alienation, and helplessness as well as suffer from an existential crisis” (Jesmin). The struggle of never being able to achieve his perception of who he wants to be, a rich man, like his brother causes things go downhill for Willy and his family. This struggle not only made his pride destroy him, it made him more concerned about what others thought of him, rather than his own family. In the end, Willy loses his battle. As a result of not attaining the American Dream, Willy takes his life. The cost of success for him was his life.