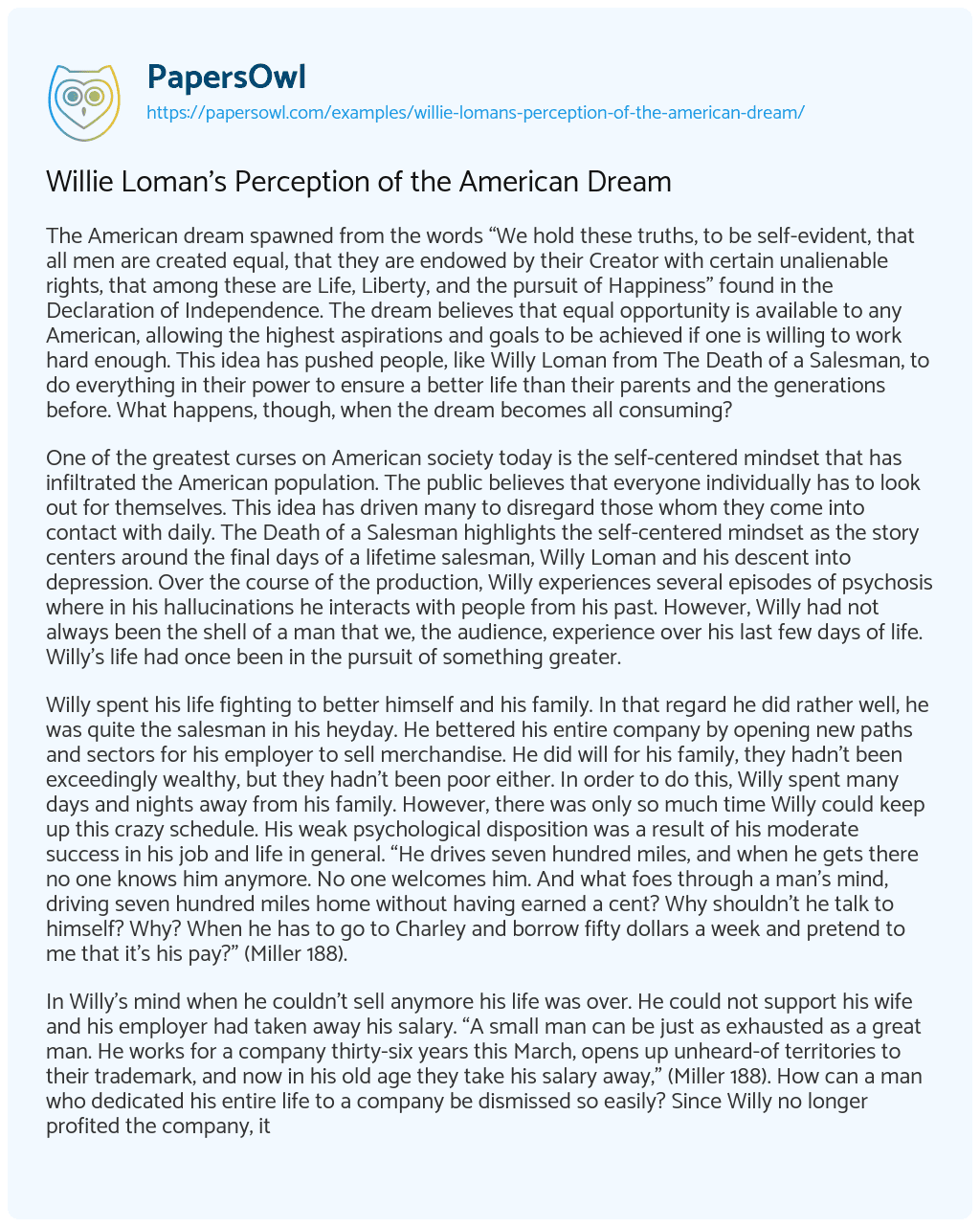 The American dream spawned from the words “We hold these truths, to be self-evident, that all men are created equal, that they are endowed by their Creator with certain unalienable rights, that among these are Life, Liberty, and the pursuit of Happiness” found in the Declaration of Independence. The dream believes that equal opportunity is available to any American, allowing the highest aspirations and goals to be achieved if one is willing to work hard enough. This idea has pushed people, like Willy Loman from The Death of a Salesman, to do everything in their power to ensure a better life than their parents and the generations before. What happens, though, when the dream becomes all consuming?

One of the greatest curses on American society today is the self-centered mindset that has infiltrated the American population. The public believes that everyone individually has to look out for themselves. This idea has driven many to disregard those whom they come into contact with daily. The Death of a Salesman highlights the self-centered mindset as the story centers around the final days of a lifetime salesman, Willy Loman and his descent into depression. Over the course of the production, Willy experiences several episodes of psychosis where in his hallucinations he interacts with people from his past. However, Willy had not always been the shell of a man that we, the audience, experience over his last few days of life. Willy’s life had once been in the pursuit of something greater.

Willy spent his life fighting to better himself and his family. In that regard he did rather well, he was quite the salesman in his heyday. He bettered his entire company by opening new paths and sectors for his employer to sell merchandise. He did will for his family, they hadn’t been exceedingly wealthy, but they hadn’t been poor either. In order to do this, Willy spent many days and nights away from his family. However, there was only so much time Willy could keep up this crazy schedule. His weak psychological disposition was a result of his moderate success in his job and life in general. “He drives seven hundred miles, and when he gets there no one knows him anymore. No one welcomes him. And what foes through a man’s mind, driving seven hundred miles home without having earned a cent? Why shouldn’t he talk to himself? Why? When he has to go to Charley and borrow fifty dollars a week and pretend to me that it’s his pay?” (Miller 188).

In Willy’s mind when he couldn’t sell anymore his life was over. He could not support his wife and his employer had taken away his salary. “A small man can be just as exhausted as a great man. He works for a company thirty-six years this March, opens up unheard-of territories to their trademark, and now in his old age they take his salary away,” (Miller 188). How can a man who dedicated his entire life to a company be dismissed so easily? Since Willy no longer profited the company, it was acceptable to take his salary. This is the mindset that the American population perpetuates today, there is no loyalty or respect. Greed and self-interest have taken over replacing any regard for people as individuals. Willy sums of the problem perfectly when he says, “you can’t eat the orange and throw away the peel – a man is not a piece of fruit!” (Miller 206).

The United States of America is an overworked nation. The desire for success is so strong, that many fail as they cannot keep up with the fast pace of American society or deal with the overpowering pressure of the American dream. Americans need to reevaluate the values and methods which are used to reach reasonable success. It is time to return to the values of loyalty and respect that originally defined America. Everyone individually has value, and everyone individually deserves to be respected regardless of economic or social status.