The Good Vs. Bad Dog 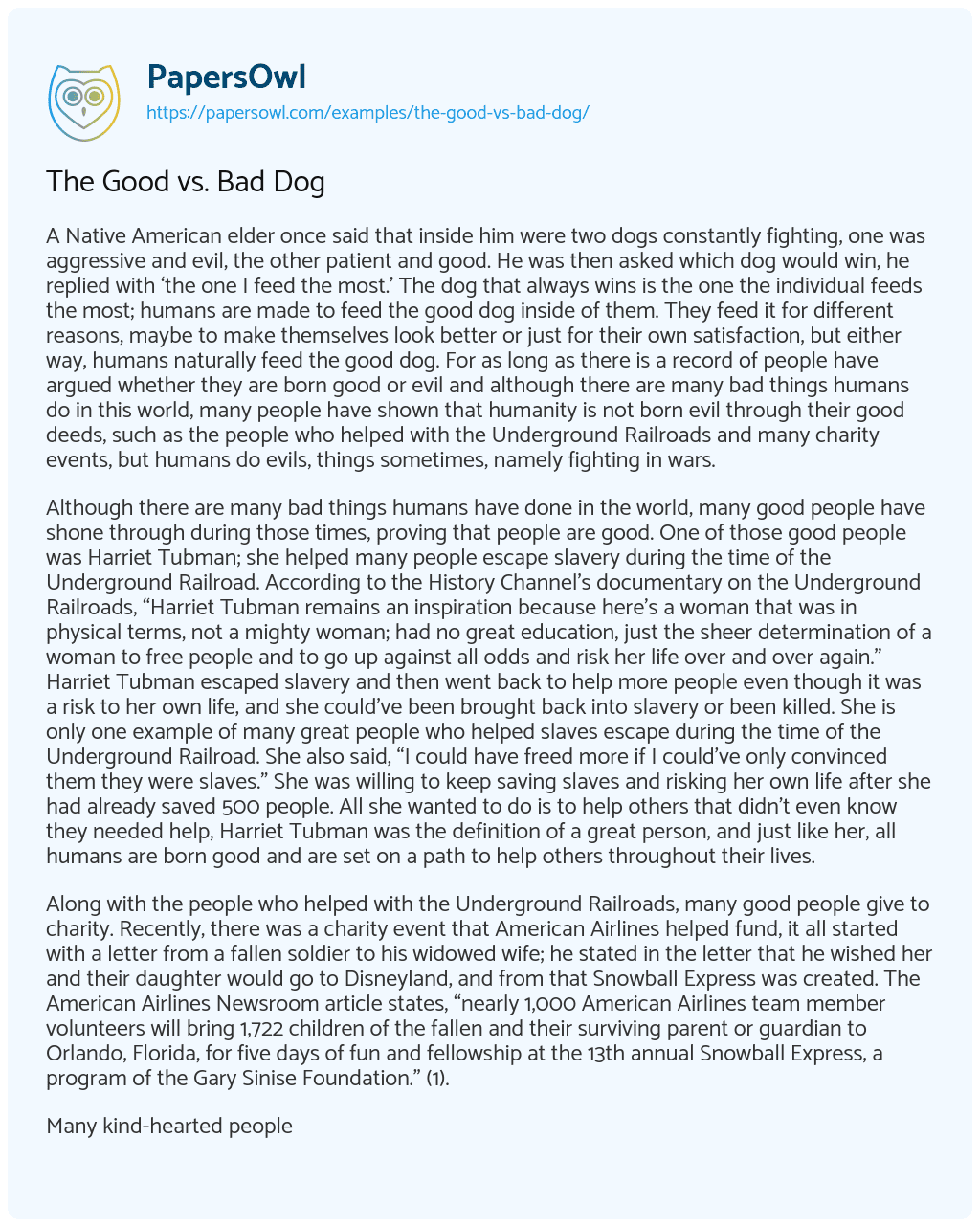 A Native American elder once said that inside him were two dogs constantly fighting, one was aggressive and evil, the other patient and good. He was then asked which dog would win, he replied with ‘the one I feed the most.’ The dog that always wins is the one the individual feeds the most; humans are made to feed the good dog inside of them. They feed it for different reasons, maybe to make themselves look better or just for their own satisfaction, but either way, humans naturally feed the good dog. For as long as there is a record of people have argued whether they are born good or evil and although there are many bad things humans do in this world, many people have shown that humanity is not born evil through their good deeds, such as the people who helped with the Underground Railroads and many charity events, but humans do evils, things sometimes, namely fighting in wars.

Although there are many bad things humans have done in the world, many good people have shone through during those times, proving that people are good. One of those good people was Harriet Tubman; she helped many people escape slavery during the time of the Underground Railroad. According to the History Channel’s documentary on the Underground Railroads, “Harriet Tubman remains an inspiration because here’s a woman that was in physical terms, not a mighty woman; had no great education, just the sheer determination of a woman to free people and to go up against all odds and risk her life over and over again.” Harriet Tubman escaped slavery and then went back to help more people even though it was a risk to her own life, and she could’ve been brought back into slavery or been killed. She is only one example of many great people who helped slaves escape during the time of the Underground Railroad. She also said, “I could have freed more if I could’ve only convinced them they were slaves.” She was willing to keep saving slaves and risking her own life after she had already saved 500 people. All she wanted to do is to help others that didn’t even know they needed help, Harriet Tubman was the definition of a great person, and just like her, all humans are born good and are set on a path to help others throughout their lives.

Along with the people who helped with the Underground Railroads, many good people give to charity. Recently, there was a charity event that American Airlines helped fund, it all started with a letter from a fallen soldier to his widowed wife; he stated in the letter that he wished her and their daughter would go to Disneyland, and from that Snowball Express was created. The American Airlines Newsroom article states, “nearly 1,000 American Airlines team member volunteers will bring 1,722 children of the fallen and their surviving parent or guardian to Orlando, Florida, for five days of fun and fellowship at the 13th annual Snowball Express, a program of the Gary Sinise Foundation.” (1).

Many kind-hearted people donated their time and money to help these distraught families. No one had to help, everyone could’ve just let it be, but instead, 1,000 people volunteered to help bring over 1,000 children with their surviving parent to Disney World for free. Events such as these prove humans are born good-hearted. Along with this, charity statistics have been increasing, according to Charity Navigator, “Giving has increased in current dollars every year since 1977, with the exception of three years” (1). Almost every year people have been giving more and more to charity to help their fellow humans in their times of need. Often humanity is categorized as greedy, but according to Charity Navigator, people have been giving more and more to charities, this shows humans are good at heart and care about each other.

There are some good events that have happened in the world, but there have been many bad events as a direct cause of humans. World War I, for example, caused many unnecessary deaths as Burt Solomon writes, “It was, simply, the insanity of the only carnivorous species that kills its own kind for no good reason. And for this, more than 16 million men went to their slaughter, many of them in cruel and creative ways.” (1). The human race is cruel, but it is also beautiful and good. If things such as this wouldn’t have happened, then things such as the American Red Cross wouldn’t have been created. The American Red Cross helped so many people in need, and still does to this day! Solomon also writes, “All wars tell us something about the basest regions of human nature, the First World War more than most. About the nature of covetousness, the perils of insecurity, the ease of losing human control over human events.” (1). Humans have flaws, but if it weren’t for these flaws we wouldn’t have many of the great things we have now; many great people and events have come out of bad situations such as World War I and The American Red Cross. Humans have flaws and sometimes they do bad things, but they are all born with goodness in their hearts, and a will to help others.

For as long as there is a record of people have argued whether they are born good or evil and although there are many bad things humans do in this world, many people have shown that humanity is not born evil through their good deeds. Every person has a choice to side with the good dog or bad dog within themselves, but they are naturally born with the desire to side with the good dog.