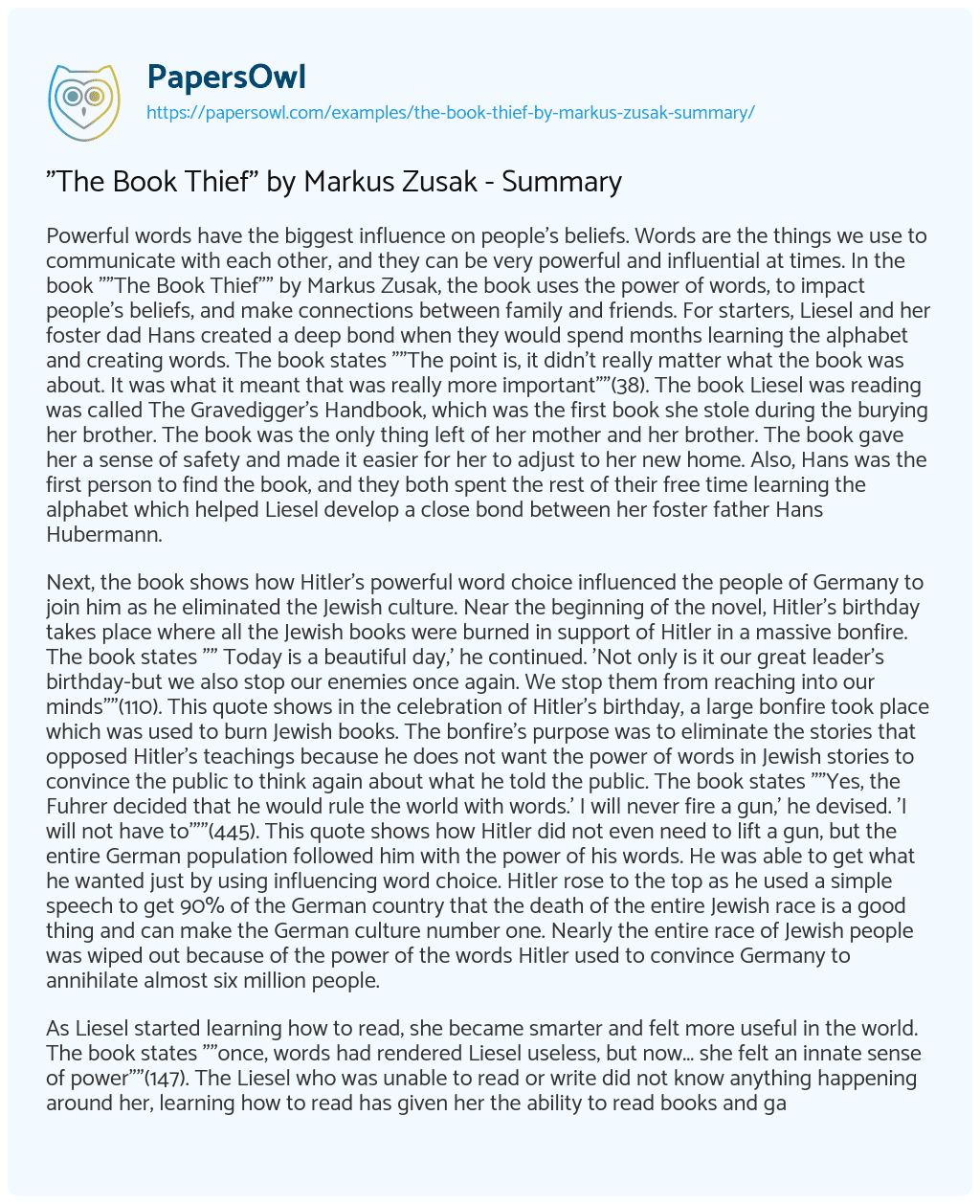 Powerful words have the biggest influence on people’s beliefs. Words are the things we use to communicate with each other, and they can be very powerful and influential at times. In the book “”The Book Thief”” by Markus Zusak, the book uses the power of words, to impact people’s beliefs, and make connections between family and friends. For starters, Liesel and her foster dad Hans created a deep bond when they would spend months learning the alphabet and creating words. The book states “”The point is, it didn’t really matter what the book was about. It was what it meant that was really more important””(38). The book Liesel was reading was called The Gravedigger’s Handbook, which was the first book she stole during the burying her brother. The book was the only thing left of her mother and her brother. The book gave her a sense of safety and made it easier for her to adjust to her new home. Also, Hans was the first person to find the book, and they both spent the rest of their free time learning the alphabet which helped Liesel develop a close bond between her foster father Hans Hubermann.

Next, the book shows how Hitler’s powerful word choice influenced the people of Germany to join him as he eliminated the Jewish culture. Near the beginning of the novel, Hitler’s birthday takes place where all the Jewish books were burned in support of Hitler in a massive bonfire. The book states “” Today is a beautiful day,’ he continued. ‘Not only is it our great leader’s birthday-but we also stop our enemies once again. We stop them from reaching into our minds””(110). This quote shows in the celebration of Hitler’s birthday, a large bonfire took place which was used to burn Jewish books. The bonfire’s purpose was to eliminate the stories that opposed Hitler’s teachings because he does not want the power of words in Jewish stories to convince the public to think again about what he told the public. The book states “”Yes, the Fuhrer decided that he would rule the world with words.’ I will never fire a gun,’ he devised. ‘I will not have to'””(445). This quote shows how Hitler did not even need to lift a gun, but the entire German population followed him with the power of his words. He was able to get what he wanted just by using influencing word choice. Hitler rose to the top as he used a simple speech to get 90% of the German country that the death of the entire Jewish race is a good thing and can make the German culture number one. Nearly the entire race of Jewish people was wiped out because of the power of the words Hitler used to convince Germany to annihilate almost six million people.

As Liesel started learning how to read, she became smarter and felt more useful in the world. The book states “”once, words had rendered Liesel useless, but now… she felt an innate sense of power””(147). The Liesel who was unable to read or write did not know anything happening around her, learning how to read has given her the ability to read books and gain knowledge that helped her find out her mother was a communist. The power of words has given Liesel the knowledge and with her passion to keep reading, which she later uses to bring people together. Before Liesel knew how to read and write, Liesel’s love for words saved her life during the bombing of Himmel Street where she was the only survivor sitting in the basement, writing. The book states “”After ten nights of writing, Munich was bombed again. Liesel was up to page 102 and was asleep in the basement. She did not hear the cuckoo or the sirens””(527). Liesel’s motivation and passion to learn helped her sit in the cold, dark basement waking up early to write, and that is the only reason she survives the bomb that wiped out Himmel Street.