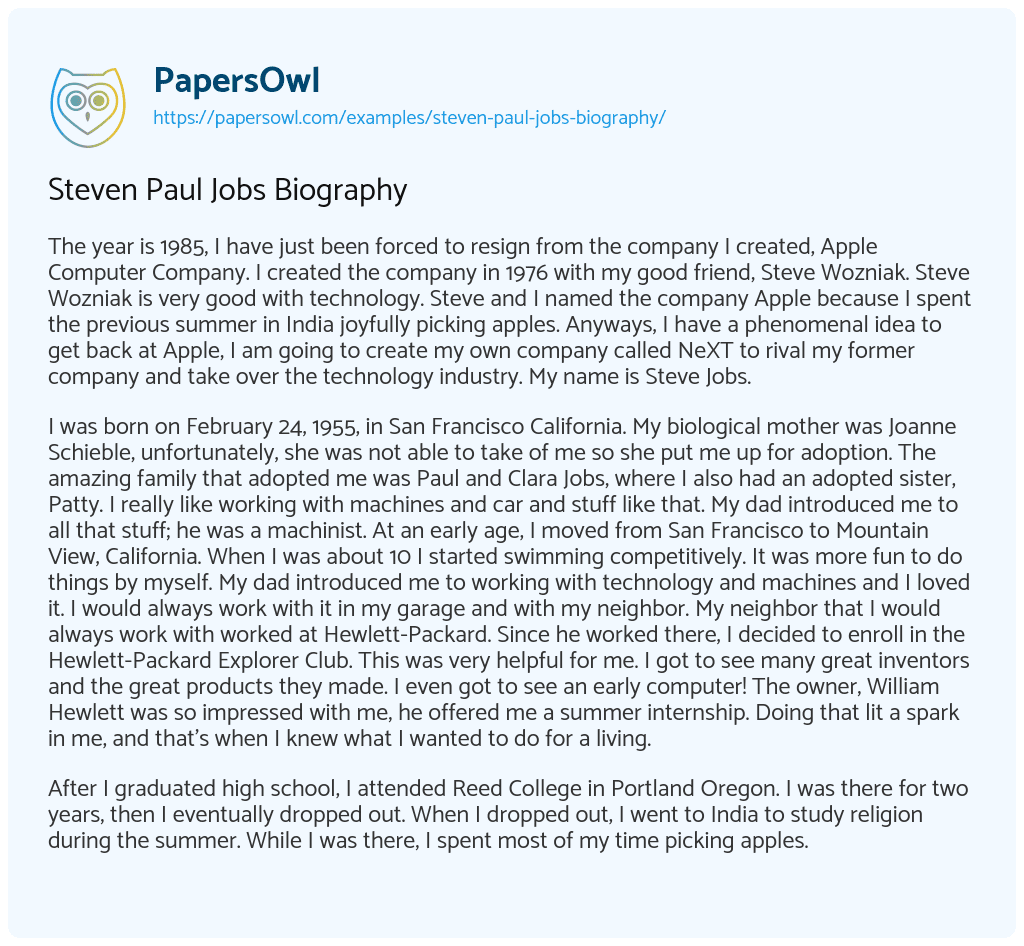 The year is 1985, I have just been forced to resign from the company I created, Apple Computer Company. I created the company in 1976 with my good friend, Steve Wozniak. Steve Wozniak is very good with technology. Steve and I named the company Apple because I spent the previous summer in India joyfully picking apples. Anyways, I have a phenomenal idea to get back at Apple, I am going to create my own company called NeXT to rival my former company and take over the technology industry. My name is Steve Jobs.

I was born on February 24, 1955, in San Francisco California. My biological mother was Joanne Schieble, unfortunately, she was not able to take of me so she put me up for adoption. The amazing family that adopted me was Paul and Clara Jobs, where I also had an adopted sister, Patty. I really like working with machines and car and stuff like that. My dad introduced me to all that stuff; he was a machinist. At an early age, I moved from San Francisco to Mountain View, California. When I was about 10 I started swimming competitively. It was more fun to do things by myself. My dad introduced me to working with technology and machines and I loved it. I would always work with it in my garage and with my neighbor. My neighbor that I would always work with worked at Hewlett-Packard. Since he worked there, I decided to enroll in the Hewlett-Packard Explorer Club. This was very helpful for me. I got to see many great inventors and the great products they made. I even got to see an early computer! The owner, William Hewlett was so impressed with me, he offered me a summer internship. Doing that lit a spark in me, and that’s when I knew what I wanted to do for a living.

After I graduated high school, I attended Reed College in Portland Oregon. I was there for two years, then I eventually dropped out. When I dropped out, I went to India to study religion during the summer. While I was there, I spent most of my time picking apples.