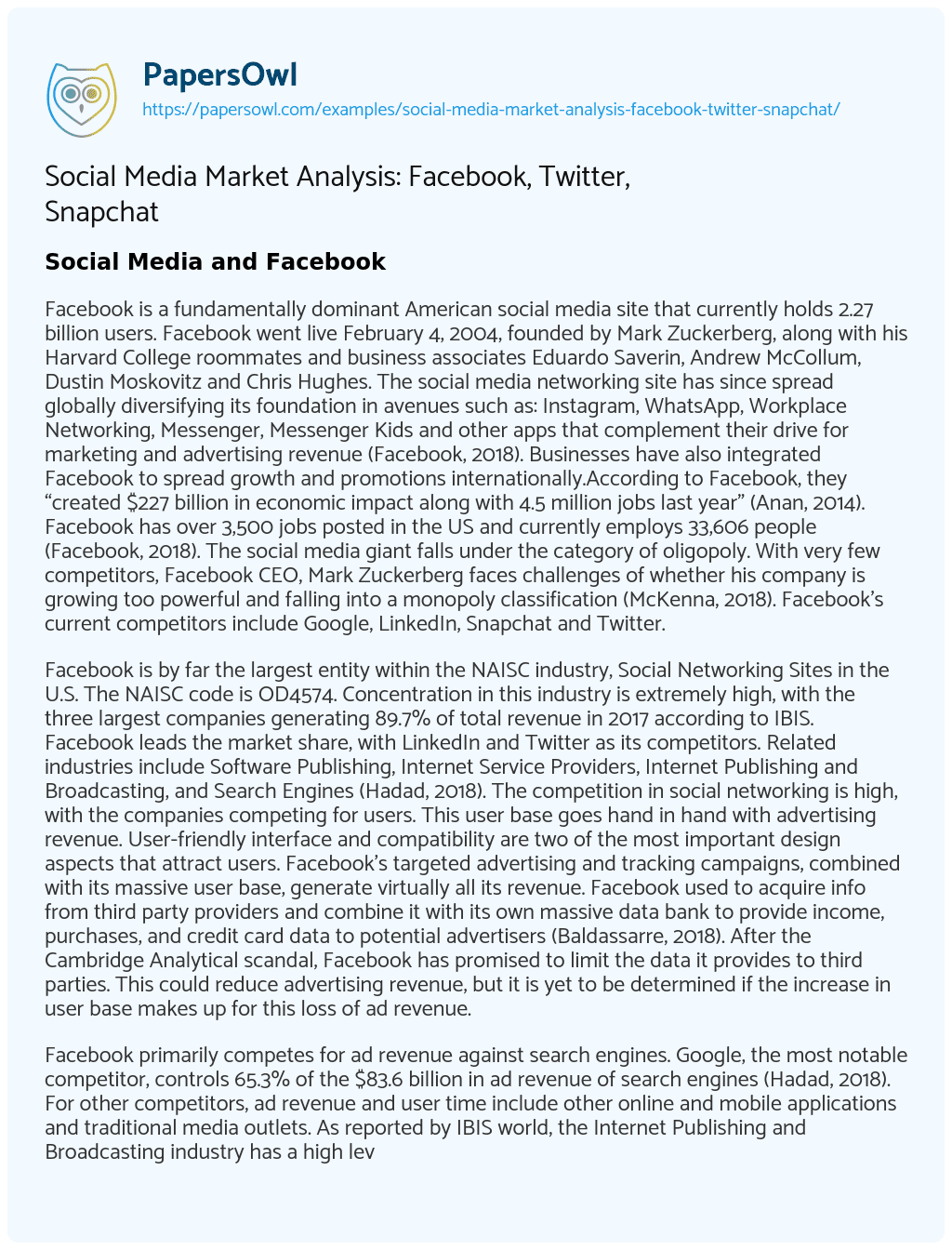 Facebook is a fundamentally dominant American social media site that currently holds 2.27 billion users. Facebook went live February 4, 2004, founded by Mark Zuckerberg, along with his Harvard College roommates and business associates Eduardo Saverin, Andrew McCollum, Dustin Moskovitz and Chris Hughes. The social media networking site has since spread globally diversifying its foundation in avenues such as: Instagram, WhatsApp, Workplace Networking, Messenger, Messenger Kids and other apps that complement their drive for marketing and advertising revenue (Facebook, 2018). Businesses have also integrated Facebook to spread growth and promotions internationally.According to Facebook, they “created $227 billion in economic impact along with 4.5 million jobs last year” (Anan, 2014). Facebook has over 3,500 jobs posted in the US and currently employs 33,606 people (Facebook, 2018). The social media giant falls under the category of oligopoly. With very few competitors, Facebook CEO, Mark Zuckerberg faces challenges of whether his company is growing too powerful and falling into a monopoly classification (McKenna, 2018). Facebook’s current competitors include Google, LinkedIn, Snapchat and Twitter.

Facebook is by far the largest entity within the NAISC industry, Social Networking Sites in the U.S. The NAISC code is OD4574. Concentration in this industry is extremely high, with the three largest companies generating 89.7% of total revenue in 2017 according to IBIS. Facebook leads the market share, with LinkedIn and Twitter as its competitors. Related industries include Software Publishing, Internet Service Providers, Internet Publishing and Broadcasting, and Search Engines (Hadad, 2018). The competition in social networking is high, with the companies competing for users. This user base goes hand in hand with advertising revenue. User-friendly interface and compatibility are two of the most important design aspects that attract users. Facebook’s targeted advertising and tracking campaigns, combined with its massive user base, generate virtually all its revenue. Facebook used to acquire info from third party providers and combine it with its own massive data bank to provide income, purchases, and credit card data to potential advertisers (Baldassarre, 2018). After the Cambridge Analytical scandal, Facebook has promised to limit the data it provides to third parties. This could reduce advertising revenue, but it is yet to be determined if the increase in user base makes up for this loss of ad revenue.

Facebook primarily competes for ad revenue against search engines. Google, the most notable competitor, controls 65.3% of the $83.6 billion in ad revenue of search engines (Hadad, 2018). For other competitors, ad revenue and user time include other online and mobile applications and traditional media outlets. As reported by IBIS world, the Internet Publishing and Broadcasting industry has a high level of concentration. Facebook and Google collectively account for 63.3% of the market. Facebook simultaneously grows and avoids competition by buying out “smaller companies for patents, skill sets, features or to protect its brand from a rising company that could eat away at revenue or user base” (Hadad, 2018). Facebook is extremely mindful of competitors and will try to acquire potential future threats. In 2013, Facebook attempted to acquire Snapchat for $3 billion in fear that users would spend more time on Snapchat. Snapchat refused to sell, therefore Facebook was forced to mimic Snapchat by incorporating features such as stories, embedding-location filters as well as photo & face filters, into its own platform (Hadad, 2018).

Facebook has a massive lead on its competitors in terms of market share. According to IBIS, they control 72.3% of the market share in Social Networking, followed by LinkedIn, and Twitter. Barriers to entry are medium and steady in this market. The primary barrier to entry is the significant development costs needed to enter the market. If a foray into the market does not attract the enough users, the sunk costs are extremely high. Building up advertising revenue or subscriptions takes time, so potential entrants must be very confident in their long term business plan. Brand recognition and network effects benefit Facebook and deter other entrants to the market.

Facebook seems nearly universal at this point, but there are still tastes and preferences for the service that can be gleaned from the data collected by the Pew Research Center in 2018. Women tend to be heavier users of the major social media sites in general, with women leading Facebook in particular at 74% of U.S. adults compared to 62% for men. Usage of Facebook in the U.S. declines by age, starting at 81% for ages 18-29 and ending in 41% for those above 65, fairly consistent among all the major social media players. Ethnicity is also a factor for Facebook’s demographics, with Hispanics leading at 73%, followed by blacks at 70% and whites at 67%. Geographically, adults in urban environments are much more likely to use Facebook than rural adults, with 75% compared to 58% and suburban adults predictably falling in between. Facebook usage appears to be relatively unchanged over the past few years, with the 68% of total Americans on Facebook virtually identical to 2016. In addition, 74% of Facebook users say they visit the site daily, also similar to the level from 2016. As education level rises, so does social media use. 77% of college graduates use Facebook compared to 60% of adults with a high school education or less (Smith & Anderson, 2018).

Education and income are extremely correlated, and there is a 14% increase in use of social media networks in higher income households compared to lower income households (Smith & Anderson, 2018). While Facebook is a free good, internet access and devices able to access the internet are inherently needed to partake of the platform, thereby classifying Facebook as a normal good. These are the implicit costs of consumption, but the primary cost is time. The amount of time people spend on internet-powered devices and services has increased from last year, averaging up to 6 hours a day, approximately one-third of their waking lives (Kemp, 2018). The time spent on a social media site is inherently time that could have been spent elsewhere, and this luxury of extra time is not something everyone can afford. In addition, while social media may not have normal seasonal fluctuations, they are always competing with other social media sites in particular, and all entertainment in general, for user’s time.

Facebook is such a unique service that it’s hard to imagine true substitutes to its offerings. The closest option in terms of functionality would have to be LinkedIn, but the user base of this platform is dwarfed by Facebook’s (Hills, 2018). In terms of time consumption, Snapchat and Twitter would be the closest competitors, as a 2018 study found that Facebook led social media with 74% of users visiting it daily, compared to 63% for Snapchat and 46% for Twitter (Smith & Anderson, 2018). YouTube, which has been around for quite a while, has steadily added more functionality and is on the rise as a social media platform. Look for YouTube to be a major player in the future, as although its functionality as a social media tool doesn’t quite compare yet, its user base is already above Facebook, clocking in at 73% of US adults, compared to 68% for Facebook (Hills, 2018).

Instagram and WhatsApp fall into an interesting case when attempting to classify as substitutes or complements. On one hand, they’re competing for user time, and offer direct comparison to Facebook, with photos for Instagram and messaging for WhatsApp. On the other hand, they’re both owned by Facebook and very inter-connected, with lots of shared users and ease of transition between platforms. Instagram technology has also added things to Facebook like “stories” that have helped boost total users of any of Facebook’s products to 2.5 billion different users per month (Wood, 2018). Outside of the social media platforms, Facebook can also be considered to be in competition with all other purveyors of entertainment. As the primary cost of using Facebook is time, anything that captures user time can be classified as a competitor. In total, although some of the other social media instruments provide varying degrees of overlap with Facebook, Facebook is a unique good and has no direct substitutes.

As Facebook is a free good, and extremely likely to remain that way, price elasticity does not apply in the traditional sense. The most helpful way to evaluate would be to estimate how the opportunity cost of a user’s time rises and falls. Further, the elasticity would be different for businesses than it would be for individuals. As the opportunity cost increases, individuals would give up Facebook more and more, but for a business, it would be much more inelastic. A business would be much less likely to stop using Facebook due to an increase in time spent, because the advertising is such a necessity for a business. Virtually all businesses have a Facebook presence at this point and incremental increases in the amount of time needed to maintain it would be highly unlikely to cause businesses to remove their page. The only thing that would really drive businesses away would be decreases in the user base of Facebook.

Alternatively, if one were to look at the cross-price elasticities, the prices of internet and internet devices would need to be considered. This does not provide a true sense, but as the prices for these continue to drop, Facebook gains a larger potential user base. Smartphones in particular seem to be a driving factor of increased social media usage. As two-thirds of the world now own mobile phones, it easier to keep connected while on the go. Due to the wide availability and increased affordability of these devices, the number of social media users has increased by 13% from last year. This can also be supported by the 95% of users who access Facebook solely through a mobile device. As mobile phone users cross the five billion mark, the increased accessibility of mobile phones shows a strong association with Facebook (Kemp, 2018). Facebook has recognized the impact of connectivity on their user base and has been working to increase access to the underdeveloped parts of the world. In August 2018, they announced the they have grouped all their connectivity efforts under one umbrella called, “Facebook Connectivity,” with the goal of reaching the next billion users in emerging markets (Price, 2018).