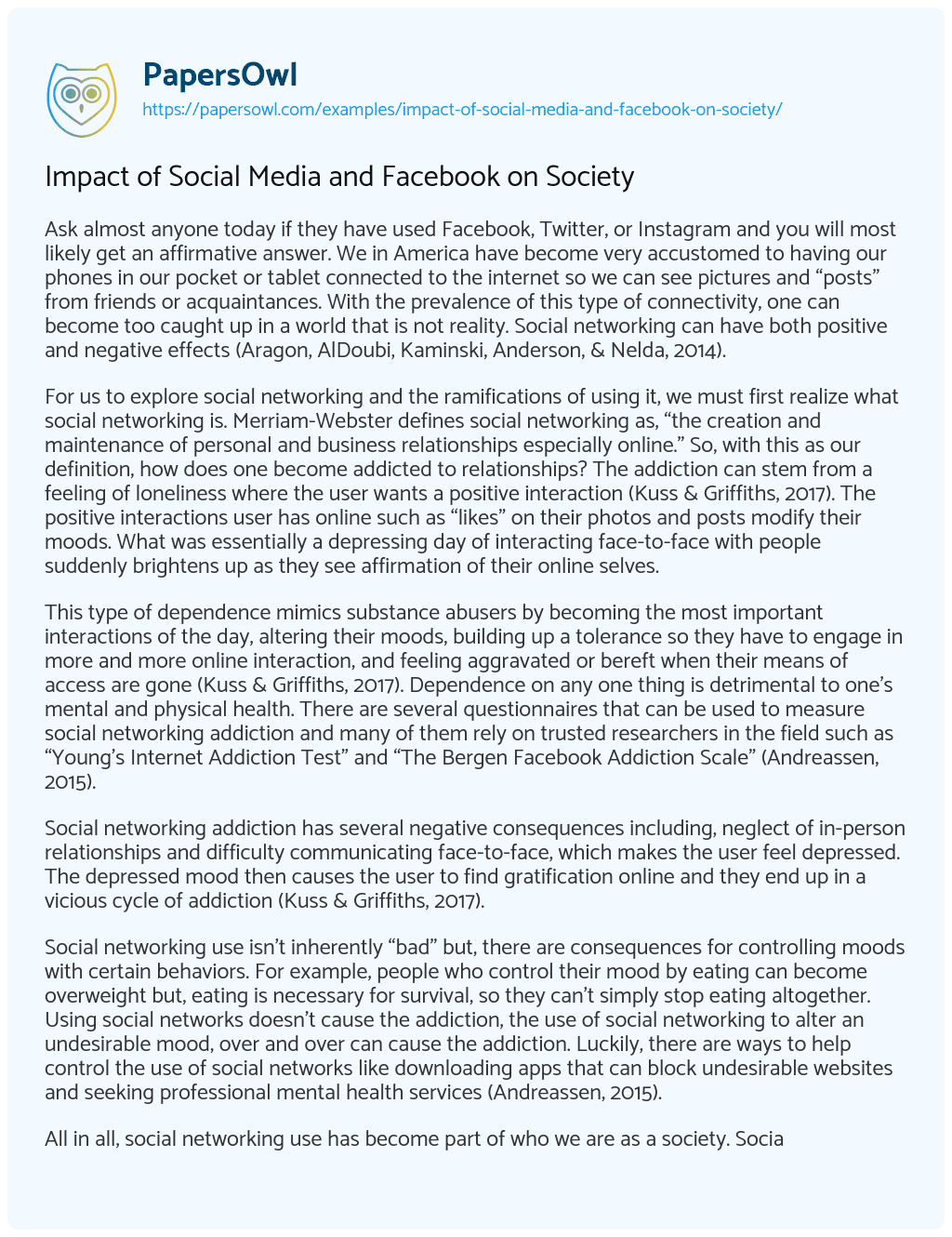 Ask almost anyone today if they have used Facebook, Twitter, or Instagram and you will most likely get an affirmative answer. We in America have become very accustomed to having our phones in our pocket or tablet connected to the internet so we can see pictures and “posts” from friends or acquaintances. With the prevalence of this type of connectivity, one can become too caught up in a world that is not reality. Social networking can have both positive and negative effects (Aragon, AlDoubi, Kaminski, Anderson, & Nelda, 2014).

For us to explore social networking and the ramifications of using it, we must first realize what social networking is. Merriam-Webster defines social networking as, “the creation and maintenance of personal and business relationships especially online.” So, with this as our definition, how does one become addicted to relationships? The addiction can stem from a feeling of loneliness where the user wants a positive interaction (Kuss & Griffiths, 2017). The positive interactions user has online such as “likes” on their photos and posts modify their moods. What was essentially a depressing day of interacting face-to-face with people suddenly brightens up as they see affirmation of their online selves.

This type of dependence mimics substance abusers by becoming the most important interactions of the day, altering their moods, building up a tolerance so they have to engage in more and more online interaction, and feeling aggravated or bereft when their means of access are gone (Kuss & Griffiths, 2017). Dependence on any one thing is detrimental to one’s mental and physical health. There are several questionnaires that can be used to measure social networking addiction and many of them rely on trusted researchers in the field such as “Young’s Internet Addiction Test” and “The Bergen Facebook Addiction Scale” (Andreassen, 2015).

Social networking addiction has several negative consequences including, neglect of in-person relationships and difficulty communicating face-to-face, which makes the user feel depressed. The depressed mood then causes the user to find gratification online and they end up in a vicious cycle of addiction (Kuss & Griffiths, 2017).

Social networking use isn’t inherently “bad” but, there are consequences for controlling moods with certain behaviors. For example, people who control their mood by eating can become overweight but, eating is necessary for survival, so they can’t simply stop eating altogether. Using social networks doesn’t cause the addiction, the use of social networking to alter an undesirable mood, over and over can cause the addiction. Luckily, there are ways to help control the use of social networks like downloading apps that can block undesirable websites and seeking professional mental health services (Andreassen, 2015).

All in all, social networking use has become part of who we are as a society. Social networking addiction is a relevant issue due to the prevalence of social media connectivity. This addiction is detrimental to one’s mental and physical health but there are ways to overcome it by professional intervention or by one’s own initiative.

Impact of Social Media and Facebook on Society. (2020, Feb 08). Retrieved from https://papersowl.com/examples/impact-of-social-media-and-facebook-on-society/

Dangers of Social Media and its Impact