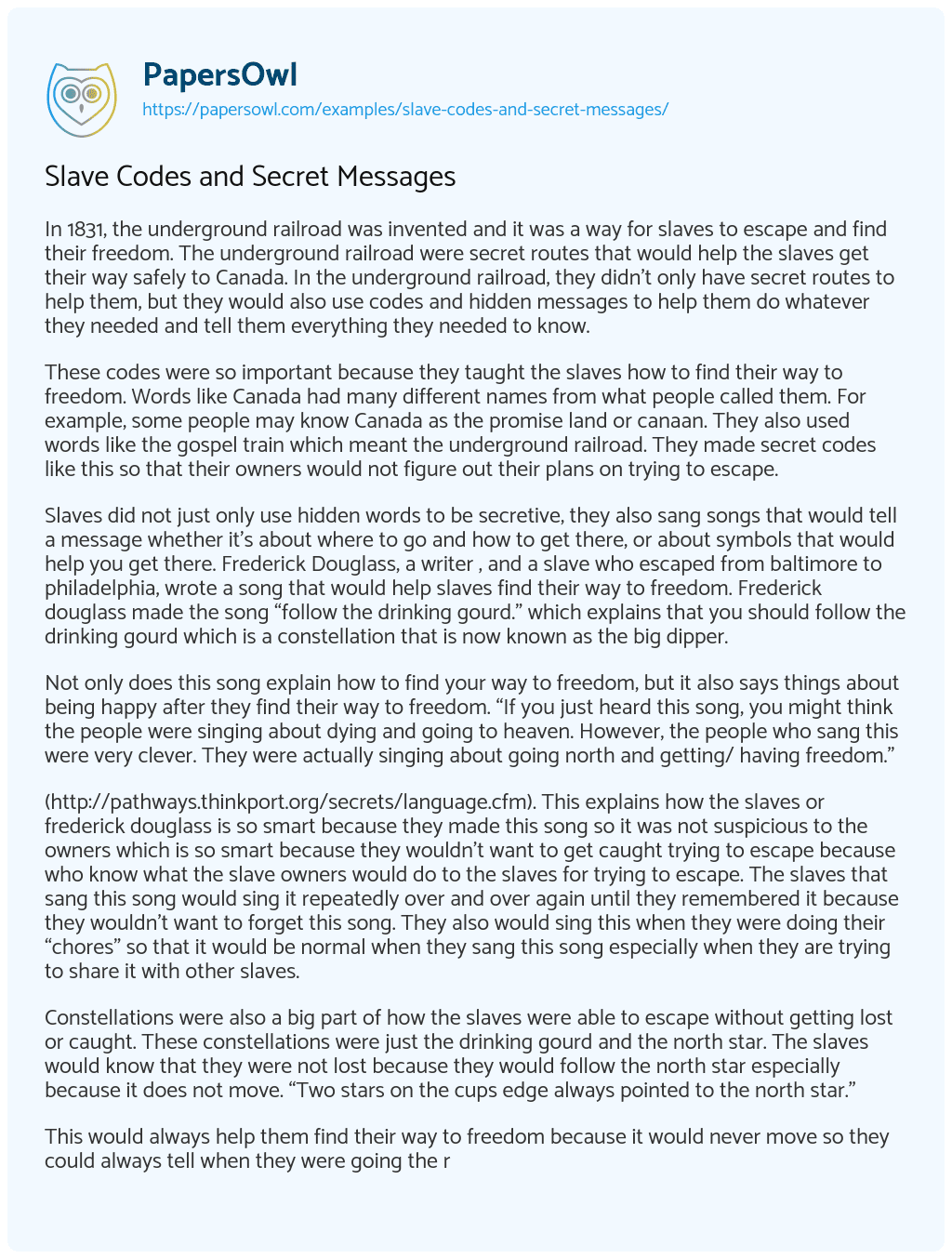 These codes were so important because they taught the slaves how to find their way to freedom. Words like Canada had many different names from what people called them. For example, some people may know Canada as the promise land or canaan. They also used words like the gospel train which meant the underground railroad. They made secret codes like this so that their owners would not figure out their plans on trying to escape.

Slaves did not just only use hidden words to be secretive, they also sang songs that would tell a message whether it’s about where to go and how to get there, or about symbols that would help you get there. Frederick Douglass, a writer , and a slave who escaped from baltimore to philadelphia, wrote a song that would help slaves find their way to freedom. Frederick douglass made the song “follow the drinking gourd.” which explains that you should follow the drinking gourd which is a constellation that is now known as the big dipper.

Not only does this song explain how to find your way to freedom, but it also says things about being happy after they find their way to freedom. “If you just heard this song, you might think the people were singing about dying and going to heaven. However, the people who sang this were very clever. They were actually singing about going north and getting/ having freedom.”

(http://pathways.thinkport.org/secrets/language.cfm). This explains how the slaves or frederick douglass is so smart because they made this song so it was not suspicious to the owners which is so smart because they wouldn’t want to get caught trying to escape because who know what the slave owners would do to the slaves for trying to escape. The slaves that sang this song would sing it repeatedly over and over again until they remembered it because they wouldn’t want to forget this song. They also would sing this when they were doing their “chores” so that it would be normal when they sang this song especially when they are trying to share it with other slaves.

This would always help them find their way to freedom because it would never move so they could always tell when they were going the right way or not. When people use these constellations, some would know it as a big bear or a drinking gourd with a long handle on the side, but this would definitely always help them make sure they were not lost.

There are many incredible slaves that did many incredible things but someone that is so important at this time was Harriet Tubman, who was also known as moses . Harriet tubman was a slave who escaped after her third time from trying to escape. When she found her way to freedom, she went back to where all the other slaves who were not free. She gathered them in small groups with a couple of people and helped them escape. “ During a ten-year span she made 19 trips into the South and escorted over 300 slaves to freedom. And, as she once proudly

pointed out to Frederick Douglass, in all of her journeys she “”never lost a single passenger.””.”(“”Harriet Tubman.”” PBS: Public Broadcasting Service,). Overall she went back over 19 times and had saved over 300 slaves and helped them find their way to freedom. This was so incredible knowing how much she cared for the 0ther people and to think about how she could have been caught every time but no, she had successfully helped every single slave she went back for and kept them safe and brought them to freedom.

Another slave who escaped was Josiah Henson. He was born as a slave and had escaped at the age of 41 . He was born a slave and was married to another slave and has 12 children. Josiah was owned by a farmer, so he mostly worked on the farms in Charles County, Maryland. Just like Harriet Tubman, Josiah was free at the age of 19 and being the person he was, he went back for many other people to help them and set them free.

Helping other slaves escape is an amazing move especially because it’s so dangerous every single time they go back and that’s why Harriet Tubman and Josiah Henson is one of the most memorable slaves who escaped. But James pennington, another slave who had escaped, he escaped at the age of 19. James had become a black educator an orator, a minister, and a writer. James was very educated and knew a lot that other slaves were not able to learn, like writing and reading.

Reading and writing was not always supported to the slaves, and the only way that a slave who was born a slave would know is because the slave owner had taught the slave or they were self taught. Since some slaves couldn’t read some signs were hidden in pictures. Pictures meaning designs on quilts. This was incredible because people would spend so much time to make the quilts with a specific design and then hang it up for fugitive slaves to see. The signs were mostly telling that theres a safe place nearby. Which also was signaled by putting a

lantern by your window at night. When a slave would see a lantern light at someones windows, they would automatically know that they were near a station, only if they knew the signal. Stations was another word for a safe place. Station masters were people who controlled or who hid the stations so that no one else but fugitive slaves were there.

Overall the slaves made so many codes to make sure that they find their way free. This was so important because it might have changed something in the past and changed now. No one knows what would happen if they didn’t escape. This is why this is so important and especially because a lot of slaves were freed.