Should Rainforests Destructions be Punished? 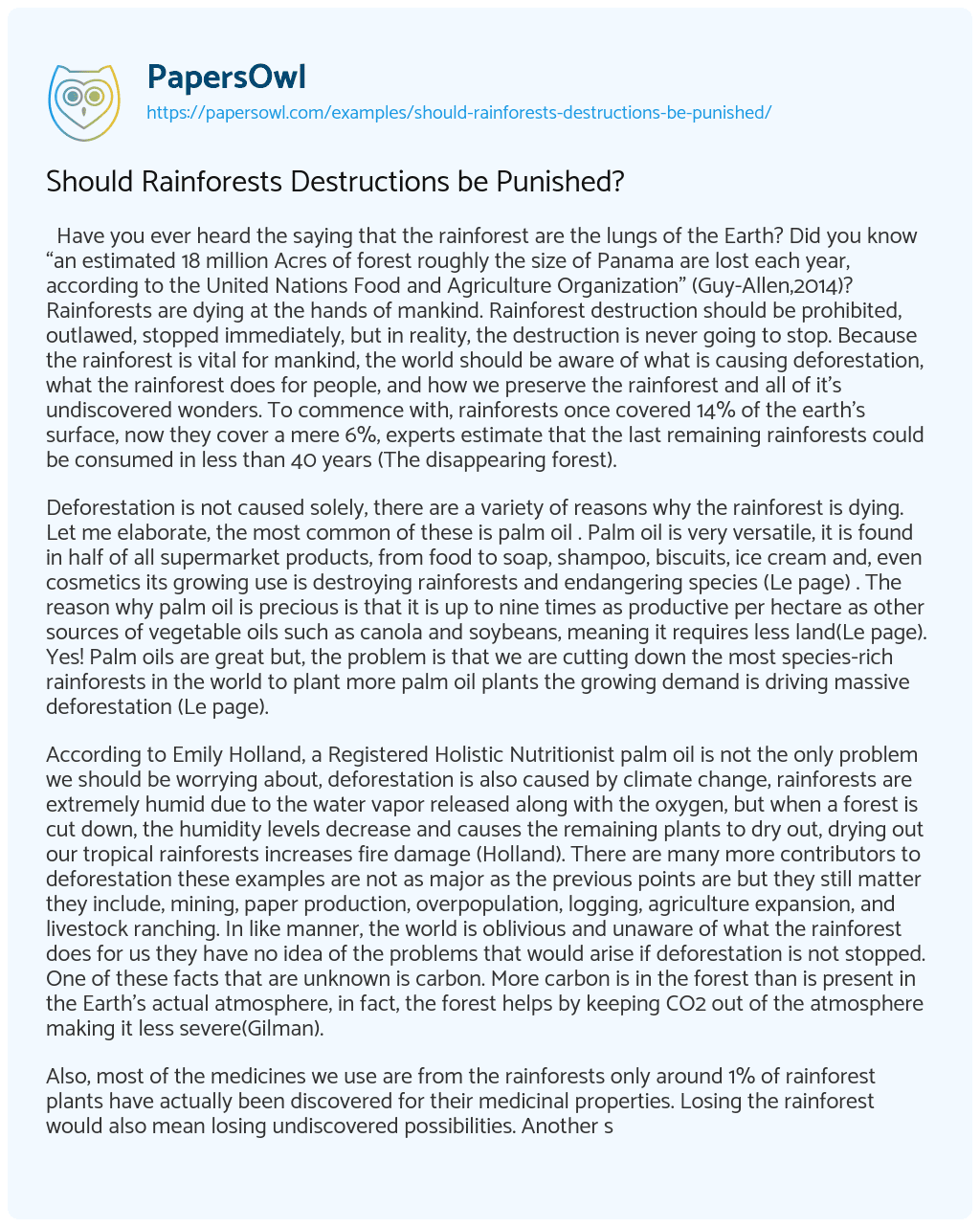 Have you ever heard the saying that the rainforest are the lungs of the Earth? Did you know “an estimated 18 million Acres of forest roughly the size of Panama are lost each year, according to the United Nations Food and Agriculture Organization” (Guy-Allen,2014)? Rainforests are dying at the hands of mankind. Rainforest destruction should be prohibited, outlawed, stopped immediately, but in reality, the destruction is never going to stop. Because the rainforest is vital for mankind, the world should be aware of what is causing deforestation, what the rainforest does for people, and how we preserve the rainforest and all of it’s undiscovered wonders. To commence with, rainforests once covered 14% of the earth’s surface, now they cover a mere 6%, experts estimate that the last remaining rainforests could be consumed in less than 40 years (The disappearing forest).

Deforestation is not caused solely, there are a variety of reasons why the rainforest is dying. Let me elaborate, the most common of these is palm oil . Palm oil is very versatile, it is found in half of all supermarket products, from food to soap, shampoo, biscuits, ice cream and, even cosmetics its growing use is destroying rainforests and endangering species (Le page) . The reason why palm oil is precious is that it is up to nine times as productive per hectare as other sources of vegetable oils such as canola and soybeans, meaning it requires less land(Le page). Yes! Palm oils are great but, the problem is that we are cutting down the most species-rich rainforests in the world to plant more palm oil plants the growing demand is driving massive deforestation (Le page).

According to Emily Holland, a Registered Holistic Nutritionist palm oil is not the only problem we should be worrying about, deforestation is also caused by climate change, rainforests are extremely humid due to the water vapor released along with the oxygen, but when a forest is cut down, the humidity levels decrease and causes the remaining plants to dry out, drying out our tropical rainforests increases fire damage (Holland). There are many more contributors to deforestation these examples are not as major as the previous points are but they still matter they include, mining, paper production, overpopulation, logging, agriculture expansion, and livestock ranching. In like manner, the world is oblivious and unaware of what the rainforest does for us they have no idea of the problems that would arise if deforestation is not stopped. One of these facts that are unknown is carbon. More carbon is in the forest than is present in the Earth’s actual atmosphere, in fact, the forest helps by keeping CO2 out of the atmosphere making it less severe(Gilman).

Also, most of the medicines we use are from the rainforests only around 1% of rainforest plants have actually been discovered for their medicinal properties. Losing the rainforest would also mean losing undiscovered possibilities. Another sad fact is without all the plants and trees the climate in the rainforest would become dryer making it nearly impossible to grow the plants that need that extra moisture, we would be cutting off a big percentage of our food supply. Not to mention 70 percent of all Earth’s animals on land are in the rainforest that is millions of different unique species, millions haven’t even been discovered, an outcome to deforestation is extinction even to the point we are endangering the global food supply and perhaps even human survival(commit)(Guy Allen). Furthermore the most devastating of these is the effect it will have on the locals of the rainforest such problem will arise increased flooding, lack of quality water, and inability to produce their own food causes many locals to migrate to cities that will give them jobs that will treat them inhumanly (Guy Allen). As you can see all the previous facts are quite overwhelming but, there is an upside to it all we can still preserve what we have left of the rainforest in a few ways.

First consume less palm oil, just like mentioned in the previous statement palm oil is one of the biggest reason why the forest is being torn down so something that can be done to help that is to consume less of it and stop buying products with palm oil try opting for something organic it’s the healthier option anyway. Next, you can reduce the use of paper such as printing paper on both sides and recycle, try to limit your use of disposable plates or cups, or try buying all ready recycled paper, napkins, notebooks, and much more. Additionally, you can buy products from companies who support the rainforest or put a certain percentage towards the preservation of the rainforest. Most importantly what will have the most impact would be to educate others.

Should Rainforests Destructions be Punished?. (2021, May 06). Retrieved from https://papersowl.com/examples/should-rainforests-destructions-be-punished/