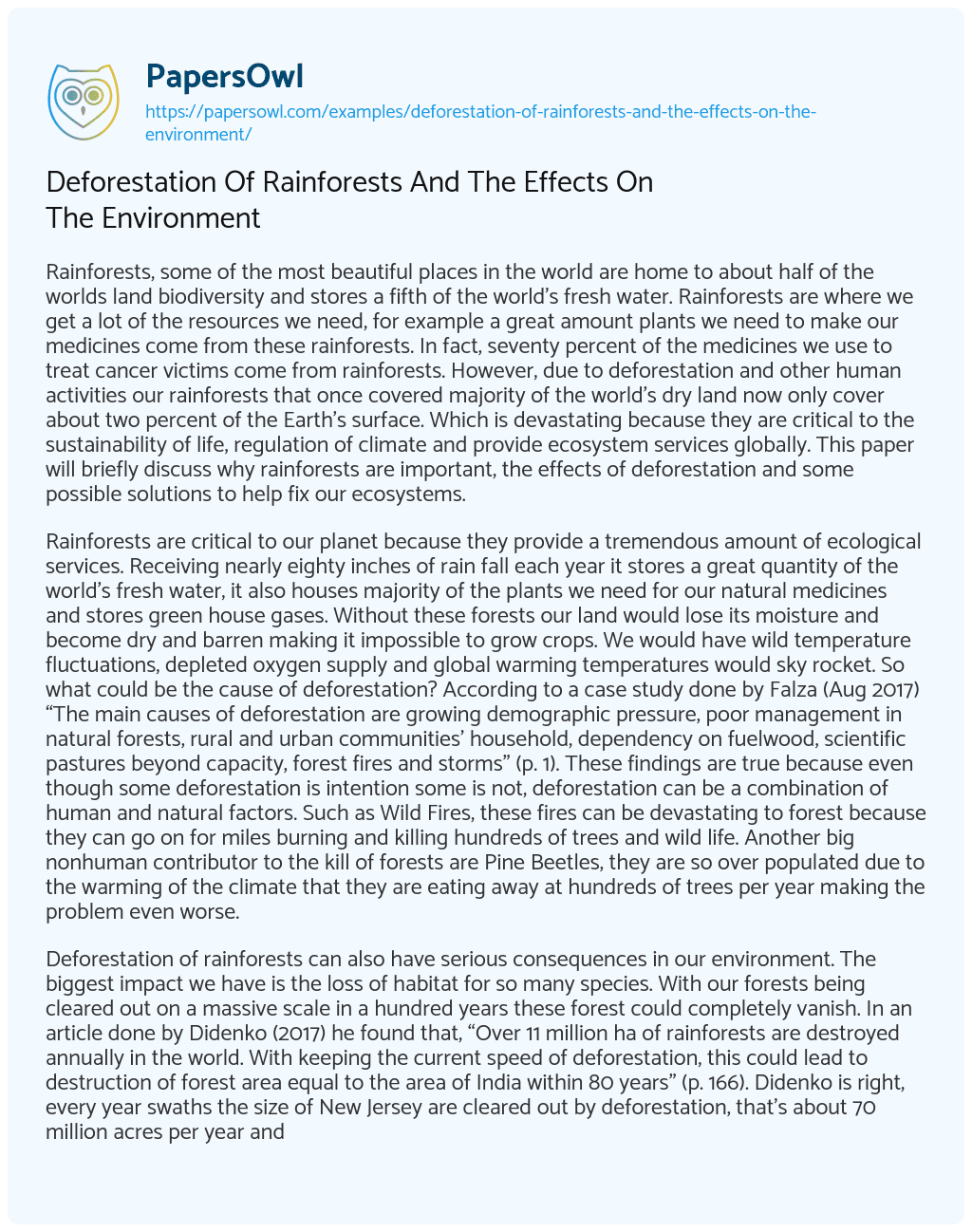 Rainforests, some of the most beautiful places in the world are home to about half of the worlds land biodiversity and stores a fifth of the world’s fresh water. Rainforests are where we get a lot of the resources we need, for example a great amount plants we need to make our medicines come from these rainforests. In fact, seventy percent of the medicines we use to treat cancer victims come from rainforests. However, due to deforestation and other human activities our rainforests that once covered majority of the world’s dry land now only cover about two percent of the Earth’s surface. Which is devastating because they are critical to the sustainability of life, regulation of climate and provide ecosystem services globally. This paper will briefly discuss why rainforests are important, the effects of deforestation and some possible solutions to help fix our ecosystems.

Rainforests are critical to our planet because they provide a tremendous amount of ecological services. Receiving nearly eighty inches of rain fall each year it stores a great quantity of the world’s fresh water, it also houses majority of the plants we need for our natural medicines and stores green house gases. Without these forests our land would lose its moisture and become dry and barren making it impossible to grow crops. We would have wild temperature fluctuations, depleted oxygen supply and global warming temperatures would sky rocket. So what could be the cause of deforestation? According to a case study done by Falza (Aug 2017) “The main causes of deforestation are growing demographic pressure, poor management in natural forests, rural and urban communities’ household, dependency on fuelwood, scientific pastures beyond capacity, forest fires and storms” (p. 1). These findings are true because even though some deforestation is intention some is not, deforestation can be a combination of human and natural factors. Such as Wild Fires, these fires can be devastating to forest because they can go on for miles burning and killing hundreds of trees and wild life. Another big nonhuman contributor to the kill of forests are Pine Beetles, they are so over populated due to the warming of the climate that they are eating away at hundreds of trees per year making the problem even worse.

Deforestation of rainforests can also have serious consequences in our environment. The biggest impact we have is the loss of habitat for so many species. With our forests being cleared out on a massive scale in a hundred years these forest could completely vanish. In an article done by Didenko (2017) he found that, “Over 11 million ha of rainforests are destroyed annually in the world. With keeping the current speed of deforestation, this could lead to destruction of forest area equal to the area of India within 80 years” (p. 166). Didenko is right, every year swaths the size of New Jersey are cleared out by deforestation, that’s about 70 million acres per year and the number keeps growing. It’s also estimated that we lose about 150 species of plants and insects every year, which can greatly hurt our medicine supply as well. Lastly, Forests are also one of the best ways help slow down global warming because they capture billions of carbon dioxide and greenhouse gases each year.

Although, to most it seems there is little to no hope for these valuable forests there are actually some efforts being done to try and save these precious ecosystems. One of these efforts is planning and managing the forest resources so we can be sure that the forests and ecosystems stay intact. The second solution is reforestation which is the process of planting new young trees where old ones were removed. However, the problem with reforestation is that it still isn’t equaling the amount of trees being cut down, also it’s takes time and is difficult to recover ecosystems that have been destroyed. These two solutions can help mitigate the consequences of deforestation and help protect the biodiversity, food supply, water supply and products we take every year from these forests. However, these two solutions won’t be enough, even with so many rules and regulations put into place illegal deforestation is still a big problem. An The United Nations will have to come up with better ways to monitor these illegal activities and will need to have stricter consequences to stop illegal deforestation.

Rainforests are described as “The Lungs To Our Planet” taking in CO2 and releasing Oxygen. Unfortunately, one and half acres are lost every day due to deforestation and everyday an increasing amount of pollutants are pumped into our atmosphere eating at our fresh air. At this rate of deforestation our forests will be gone by the year 2118, meaning things need to change and quickly. Our greatest problem of deforestation is agriculture and illegal logging operations. Countries will need to come together to develop new policies and regulations to stop this destruction because rainforests help stabilize our planet and without them it could be fatal.

Azevedo, T. (2014). Tasso Azevedo: Hopeful Lessons From The Battle To Save Rainforests. [Video File]. Retrieved from

Deforestation Of Rainforests And The Effects On The Environment. (2019, Dec 05). Retrieved from https://papersowl.com/examples/deforestation-of-rainforests-and-the-effects-on-the-environment/