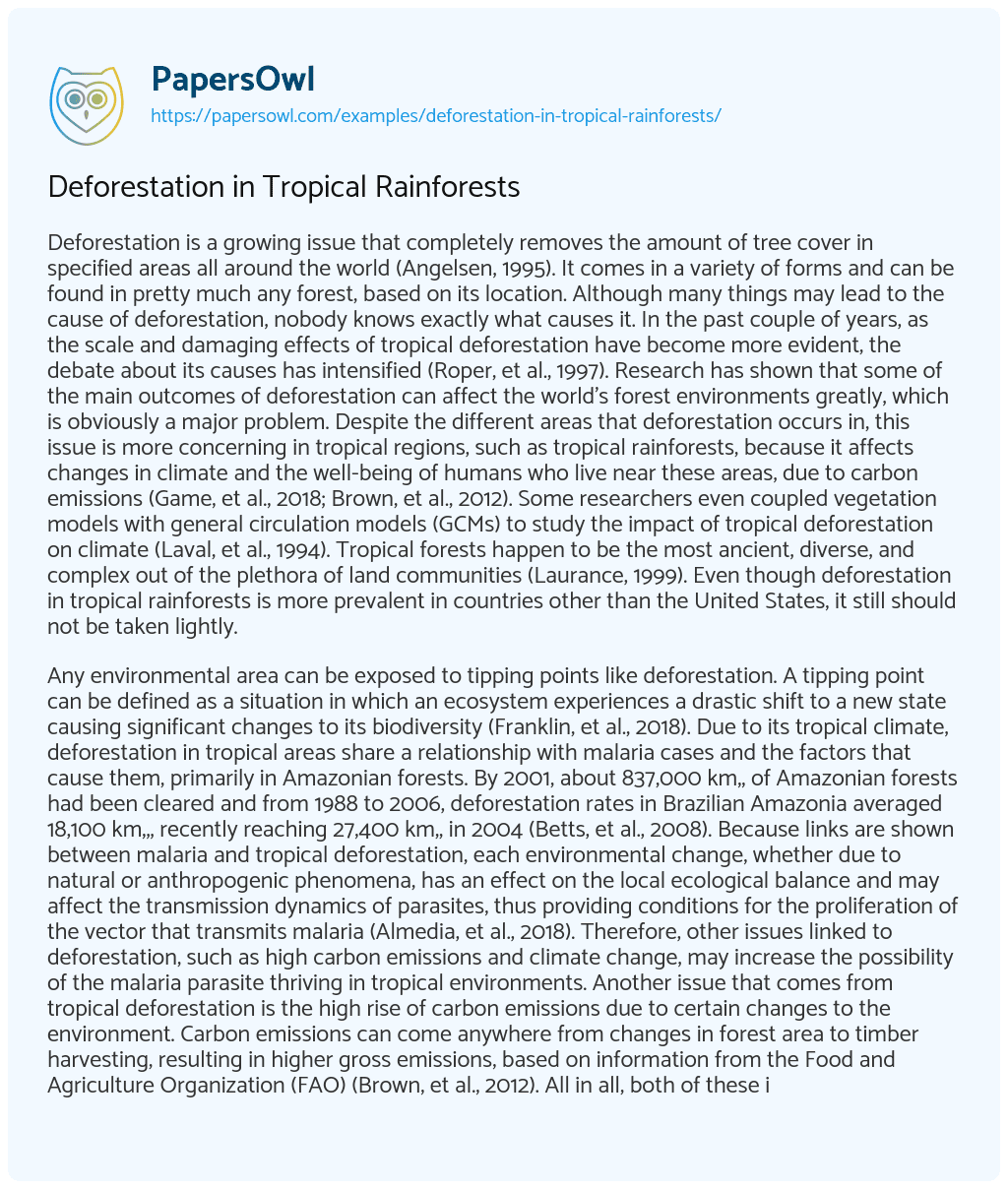 Deforestation is a growing issue that completely removes the amount of tree cover in specified areas all around the world (Angelsen, 1995). It comes in a variety of forms and can be found in pretty much any forest, based on its location. Although many things may lead to the cause of deforestation, nobody knows exactly what causes it. In the past couple of years, as the scale and damaging effects of tropical deforestation have become more evident, the debate about its causes has intensified (Roper, et al., 1997). Research has shown that some of the main outcomes of deforestation can affect the world’s forest environments greatly, which is obviously a major problem. Despite the different areas that deforestation occurs in, this issue is more concerning in tropical regions, such as tropical rainforests, because it affects changes in climate and the well-being of humans who live near these areas, due to carbon emissions (Game, et al., 2018; Brown, et al., 2012). Some researchers even coupled vegetation models with general circulation models (GCMs) to study the impact of tropical deforestation on climate (Laval, et al., 1994). Tropical forests happen to be the most ancient, diverse, and complex out of the plethora of land communities (Laurance, 1999). Even though deforestation in tropical rainforests is more prevalent in countries other than the United States, it still should not be taken lightly.

Any environmental area can be exposed to tipping points like deforestation. A tipping point can be defined as a situation in which an ecosystem experiences a drastic shift to a new state causing significant changes to its biodiversity (Franklin, et al., 2018). Due to its tropical climate, deforestation in tropical areas share a relationship with malaria cases and the factors that cause them, primarily in Amazonian forests. By 2001, about 837,000 km‚‚ of Amazonian forests had been cleared and from 1988 to 2006, deforestation rates in Brazilian Amazonia averaged 18,100 km‚‚, recently reaching 27,400 km‚‚ in 2004 (Betts, et al., 2008). Because links are shown between malaria and tropical deforestation, each environmental change, whether due to natural or anthropogenic phenomena, has an effect on the local ecological balance and may affect the transmission dynamics of parasites, thus providing conditions for the proliferation of the vector that transmits malaria (Almedia, et al., 2018). Therefore, other issues linked to deforestation, such as high carbon emissions and climate change, may increase the possibility of the malaria parasite thriving in tropical environments. Another issue that comes from tropical deforestation is the high rise of carbon emissions due to certain changes to the environment. Carbon emissions can come anywhere from changes in forest area to timber harvesting, resulting in higher gross emissions, based on information from the Food and Agriculture Organization (FAO) (Brown, et al., 2012). All in all, both of these issues could possibly affect the well-being of the people in surrounding areas.

Deforestation in tropical rainforests and environments impacts an area’s temperature and climate greatly due to the physical change of the land. Because of this, deforestation might affect the health of humans living in tropical environments, based on research. The combined effects of changes in climate and land cover expose millions of people to an increased likelihood of heat illness (Game, et al., 2018). Even though many studies state possible causes of deforestation, like the possibility that loss of forest cover affects the climate significantly, they are not completely positive that they correlate with the issue at all (Achard, et al., 2002). While the exact way to prevent tropical deforestation is not yet known or researched, there may still be ways to help stop it, starting with limiting how many trees must be destroyed to produce other things through processes such as timber harvesting.

Should Rainforests Destructions be Punished?