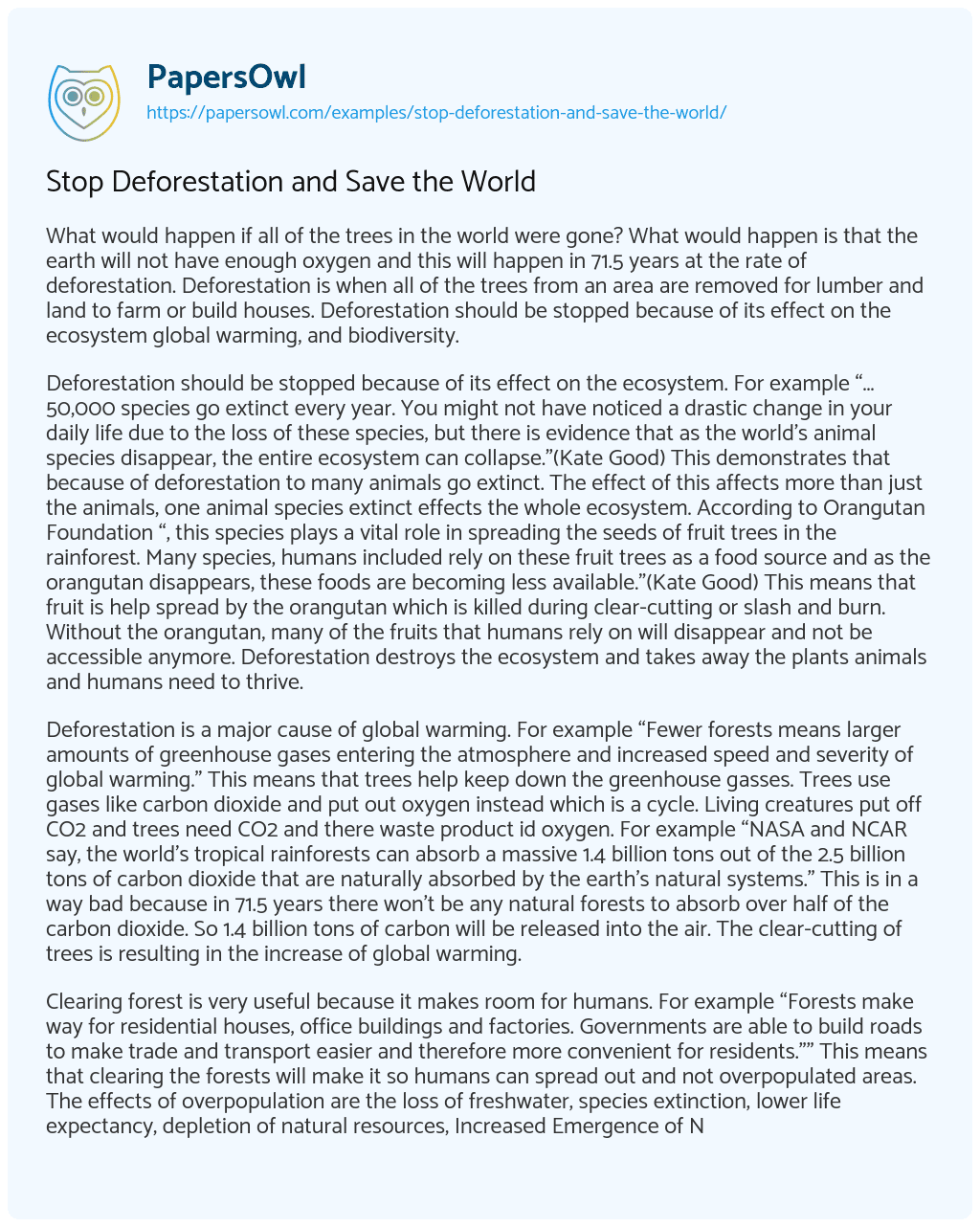 Deforestation should be stopped because of its effect on the ecosystem. For example “… 50,000 species go extinct every year. You might not have noticed a drastic change in your daily life due to the loss of these species, but there is evidence that as the world’s animal species disappear, the entire ecosystem can collapse.”(Kate Good) This demonstrates that because of deforestation to many animals go extinct. The effect of this affects more than just the animals, one animal species extinct effects the whole ecosystem. According to Orangutan Foundation “, this species plays a vital role in spreading the seeds of fruit trees in the rainforest. Many species, humans included rely on these fruit trees as a food source and as the orangutan disappears, these foods are becoming less available.”(Kate Good) This means that fruit is help spread by the orangutan which is killed during clear-cutting or slash and burn. Without the orangutan, many of the fruits that humans rely on will disappear and not be accessible anymore. Deforestation destroys the ecosystem and takes away the plants animals and humans need to thrive.

Deforestation is a major cause of global warming. For example “Fewer forests means larger amounts of greenhouse gases entering the atmosphere and increased speed and severity of global warming.” This means that trees help keep down the greenhouse gasses. Trees use gases like carbon dioxide and put out oxygen instead which is a cycle. Living creatures put off CO2 and trees need CO2 and there waste product id oxygen. For example “NASA and NCAR say, the world’s tropical rainforests can absorb a massive 1.4 billion tons out of the 2.5 billion tons of carbon dioxide that are naturally absorbed by the earth’s natural systems.” This is in a way bad because in 71.5 years there won’t be any natural forests to absorb over half of the carbon dioxide. So 1.4 billion tons of carbon will be released into the air. The clear-cutting of trees is resulting in the increase of global warming.

Clearing forest is very useful because it makes room for humans. For example “Forests make way for residential houses, office buildings and factories. Governments are able to build roads to make trade and transport easier and therefore more convenient for residents.”” This means that clearing the forests will make it so humans can spread out and not overpopulated areas. The effects of overpopulation are the loss of freshwater, species extinction, lower life expectancy, depletion of natural resources, Increased Emergence of New Epidemics and Pandemics, less freedom, more restrictions, More Intensive Farming Practices, Increased Global Warming, Climate Change, and Elevated Crime Rate. By removing forest for more land these are some problems it causes ”The loss in the number of biodiversities. This is probably the most serious consequence of deforestation. Put simply, it means the destruction and extinction of many plant and animal species, many of whom remain unknown and whose benefits will be left undiscovered.” According to the “ National Cancer Institute (NCI) estimates that 70 percent of the anti-cancer plants identified so far are rainforest plants. A new drug under development by a private pharmaceutical company, possibly for treating HIV, is Calanolide A, which is derived from a tree discovered on Borneo, according to NCI.” This all means that we are destroying medical plants and herbs that could have a cure for incurable diseases if we stopped destroying the forests. Overall the biodiversity of rainforest is great and the potential is unknown but, we are taking it before we can discover everything and causing generic for plants.

The problems of deforestation are the effect on the ecosystem, global warming, and biodiversity. People have spent years trying to cure cancer when it is in the rainforest the thing we destroy. Stop the deforestation and save the natural world along with ours.

Stop Deforestation and Save the World. (2020, Apr 16). Retrieved from https://papersowl.com/examples/stop-deforestation-and-save-the-world/