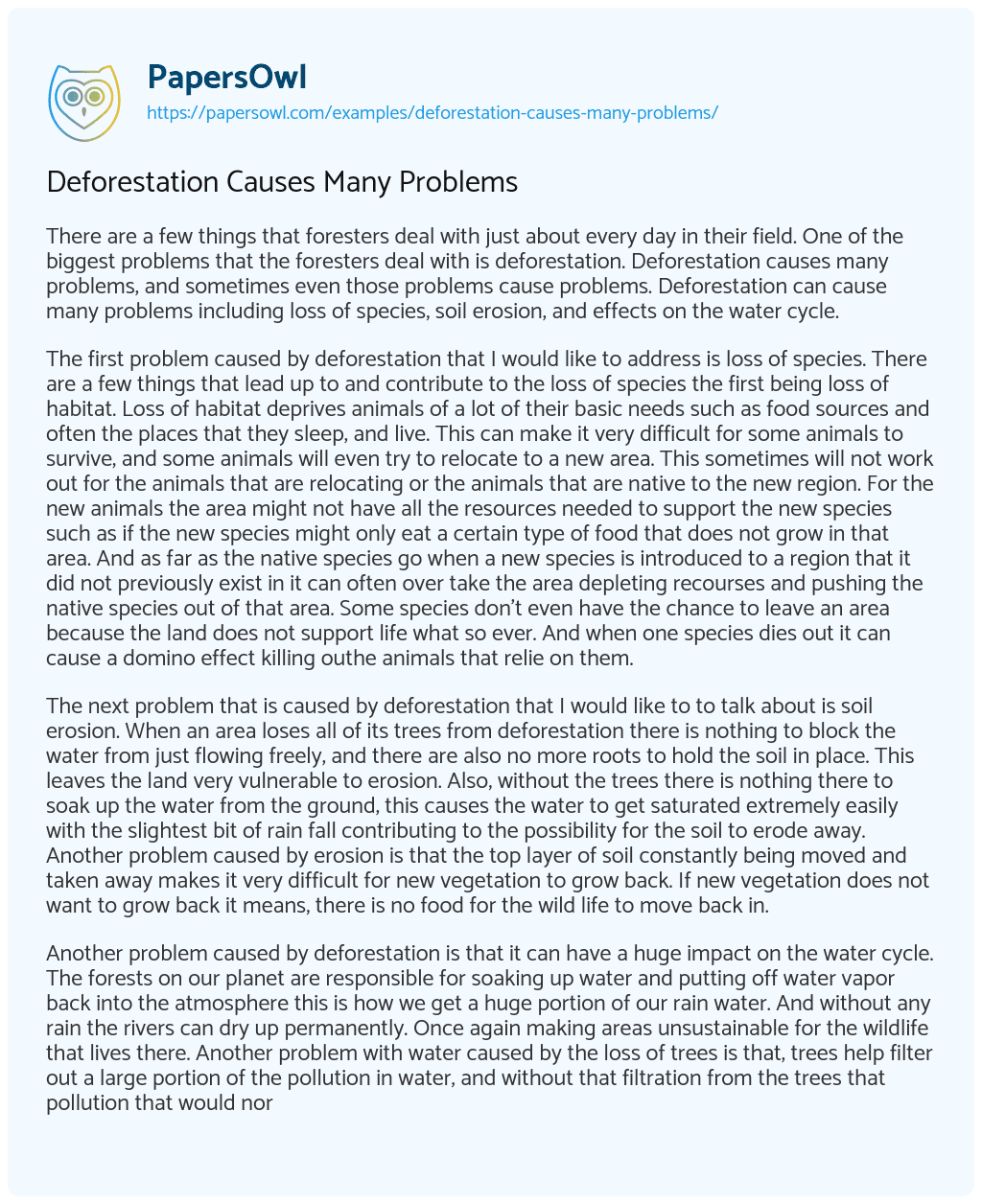 The first problem caused by deforestation that I would like to address is loss of species. There are a few things that lead up to and contribute to the loss of species the first being loss of habitat. Loss of habitat deprives animals of a lot of their basic needs such as food sources and often the places that they sleep, and live. This can make it very difficult for some animals to survive, and some animals will even try to relocate to a new area. This sometimes will not work out for the animals that are relocating or the animals that are native to the new region. For the new animals the area might not have all the resources needed to support the new species such as if the new species might only eat a certain type of food that does not grow in that area. And as far as the native species go when a new species is introduced to a region that it did not previously exist in it can often over take the area depleting recourses and pushing the native species out of that area. Some species don’t even have the chance to leave an area because the land does not support life what so ever. And when one species dies out it can cause a domino effect killing outhe animals that relie on them.

The next problem that is caused by deforestation that I would like to to talk about is soil erosion. When an area loses all of its trees from deforestation there is nothing to block the water from just flowing freely, and there are also no more roots to hold the soil in place. This leaves the land very vulnerable to erosion. Also, without the trees there is nothing there to soak up the water from the ground, this causes the water to get saturated extremely easily with the slightest bit of rain fall contributing to the possibility for the soil to erode away. Another problem caused by erosion is that the top layer of soil constantly being moved and taken away makes it very difficult for new vegetation to grow back. If new vegetation does not want to grow back it means, there is no food for the wild life to move back in.

Another problem caused by deforestation is that it can have a huge impact on the water cycle. The forests on our planet are responsible for soaking up water and putting off water vapor back into the atmosphere this is how we get a huge portion of our rain water. And without any rain the rivers can dry up permanently. Once again making areas unsustainable for the wildlife that lives there. Another problem with water caused by the loss of trees is that, trees help filter out a large portion of the pollution in water, and without that filtration from the trees that pollution that would normally be filtered out instead just goes right back into the water.

So that is how deforestation can cause many problems including loss of species, soil erosion, and effect the water cycle. As you can see trees are a vital component to our environment and we need to do everything we can to stop deforestation from destroying the environment. This can include anything from planting trees in areas that have been clear-cut to reintroducing animals back to their previously decimated home.