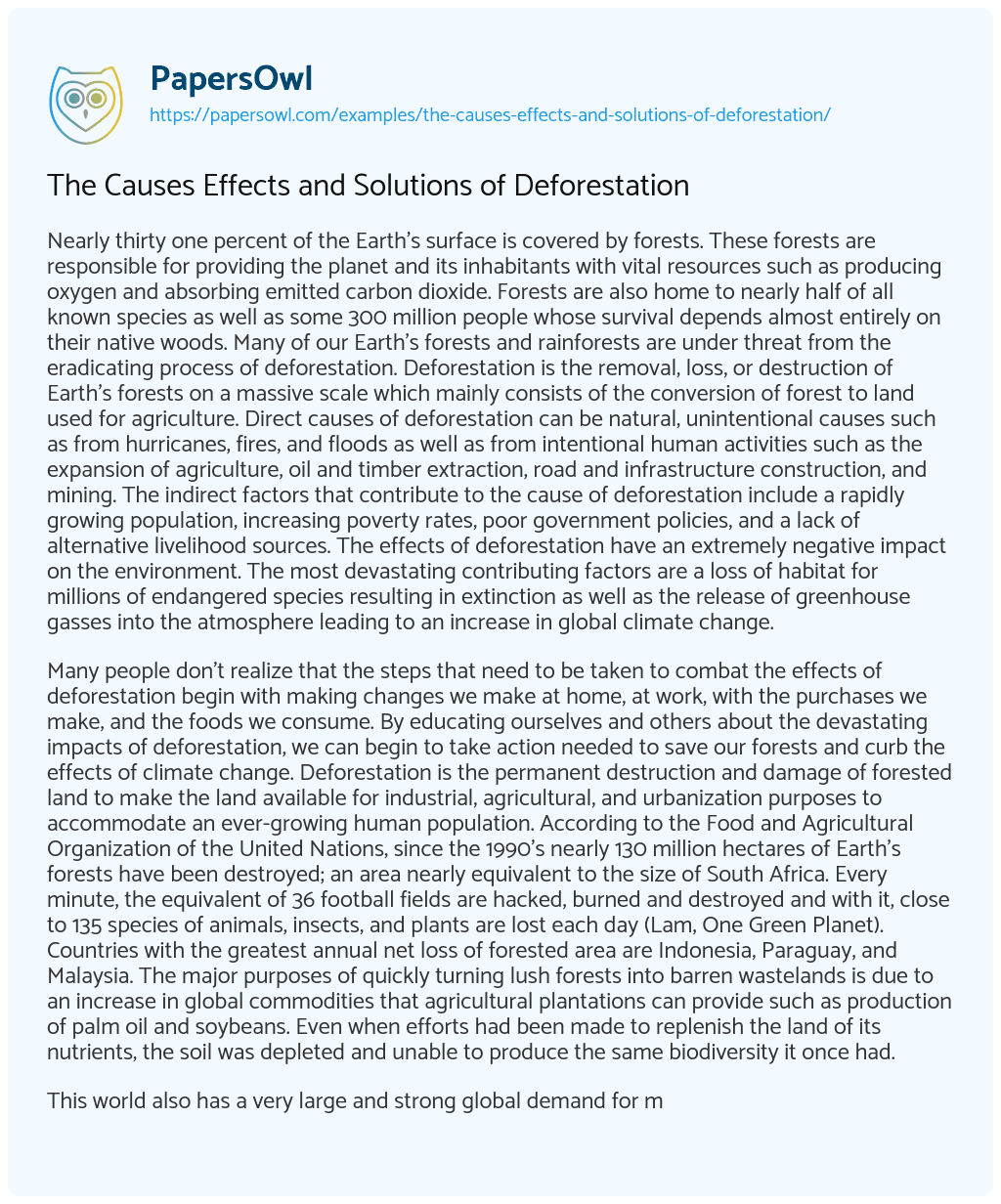 Nearly thirty one percent of the Earth’s surface is covered by forests. These forests are responsible for providing the planet and its inhabitants with vital resources such as producing oxygen and absorbing emitted carbon dioxide. Forests are also home to nearly half of all known species as well as some 300 million people whose survival depends almost entirely on their native woods. Many of our Earth’s forests and rainforests are under threat from the eradicating process of deforestation. Deforestation is the removal, loss, or destruction of Earth’s forests on a massive scale which mainly consists of the conversion of forest to land used for agriculture. Direct causes of deforestation can be natural, unintentional causes such as from hurricanes, fires, and floods as well as from intentional human activities such as the expansion of agriculture, oil and timber extraction, road and infrastructure construction, and mining. The indirect factors that contribute to the cause of deforestation include a rapidly growing population, increasing poverty rates, poor government policies, and a lack of alternative livelihood sources. The effects of deforestation have an extremely negative impact on the environment. The most devastating contributing factors are a loss of habitat for millions of endangered species resulting in extinction as well as the release of greenhouse gasses into the atmosphere leading to an increase in global climate change.

Many people don’t realize that the steps that need to be taken to combat the effects of deforestation begin with making changes we make at home, at work, with the purchases we make, and the foods we consume. By educating ourselves and others about the devastating impacts of deforestation, we can begin to take action needed to save our forests and curb the effects of climate change. Deforestation is the permanent destruction and damage of forested land to make the land available for industrial, agricultural, and urbanization purposes to accommodate an ever-growing human population. According to the Food and Agricultural Organization of the United Nations, since the 1990’s nearly 130 million hectares of Earth’s forests have been destroyed; an area nearly equivalent to the size of South Africa. Every minute, the equivalent of 36 football fields are hacked, burned and destroyed and with it, close to 135 species of animals, insects, and plants are lost each day (Lam, One Green Planet). Countries with the greatest annual net loss of forested area are Indonesia, Paraguay, and Malaysia. The major purposes of quickly turning lush forests into barren wastelands is due to an increase in global commodities that agricultural plantations can provide such as production of palm oil and soybeans. Even when efforts had been made to replenish the land of its nutrients, the soil was depleted and unable to produce the same biodiversity it once had.

This world also has a very large and strong global demand for meat. On average, we consume nearly 75 pound of meat per person, per year and that number is only growing as the population expands. India, for example is the world’s biggest exporters of beef followed by Brazil, and then Australia. This growing demand for meat only contributes to the effects of tropical deforestation as these forests are destroyed and converted into agricultural cattle ranches. It is estimated that cattle ranching in the Amazon accounts for eighty percent of the current deforestation rate, making it the largest driver for deforested land. Soy cultivation also makes up a large percentage of destruction in jungled areas. The soy plant seeds are fed to the livestock as a high protein feed as well as export for a large demand of a meat alternative. This enables farmers to push their way further into the Amazons (Butler, Deforested Amazon).

Logging, the process of cutting and processing trees to produce timber for consumption is probably the most commonly known driver of deforestation. Wood-based industries use timber to produce and supply products such as paper, construction, furniture, as well as charcoal and lumber for fueling purposes. One of the many consequences of deforestation is soil erosion, a major environmental and agricultural worldwide issue. Rainforest trees are able to act as an anchor for soil with their roots. When these trees are uprooted, it is no longer able to retain water and nutrients nor provide the soil shade from the sun, leaving the soil dry and deficient of proper nutrients (Echolls, Soil Erosion). The fertile topsoil is then able to blow or wash away from flash floods during heavy tropical rains leaving the land barren and unable to regenerate future vegetation. Soil erosion has also led to an increase in pollution and sedimentation in neighboring streams and rivers.

The excessive accumulation of sediment in these bodies of water may then lead to flooding as well as landslides. Deforestation may also be to blame for severe and frequent droughts. Throughout rainforests, moisture that is collected on the leaves, branches, and trunks of trees is able to be stored within its soil. When the moisture evaporates into the atmosphere through the process of transpiration, rain clouds are then able to form which then release rain back into the forested region creating a water cycle. As well as being a main contributor to rainfall, forests have the ability to influence the amount as well as the timing of its downpours. Simply put, without the trees to supply moisture, clouds cannot form resulting in a severe reduction of rainfall and eventually droughts.

The Causes Effects and Solutions of Deforestation. (2019, Feb 28). Retrieved from https://papersowl.com/examples/the-causes-effects-and-solutions-of-deforestation/