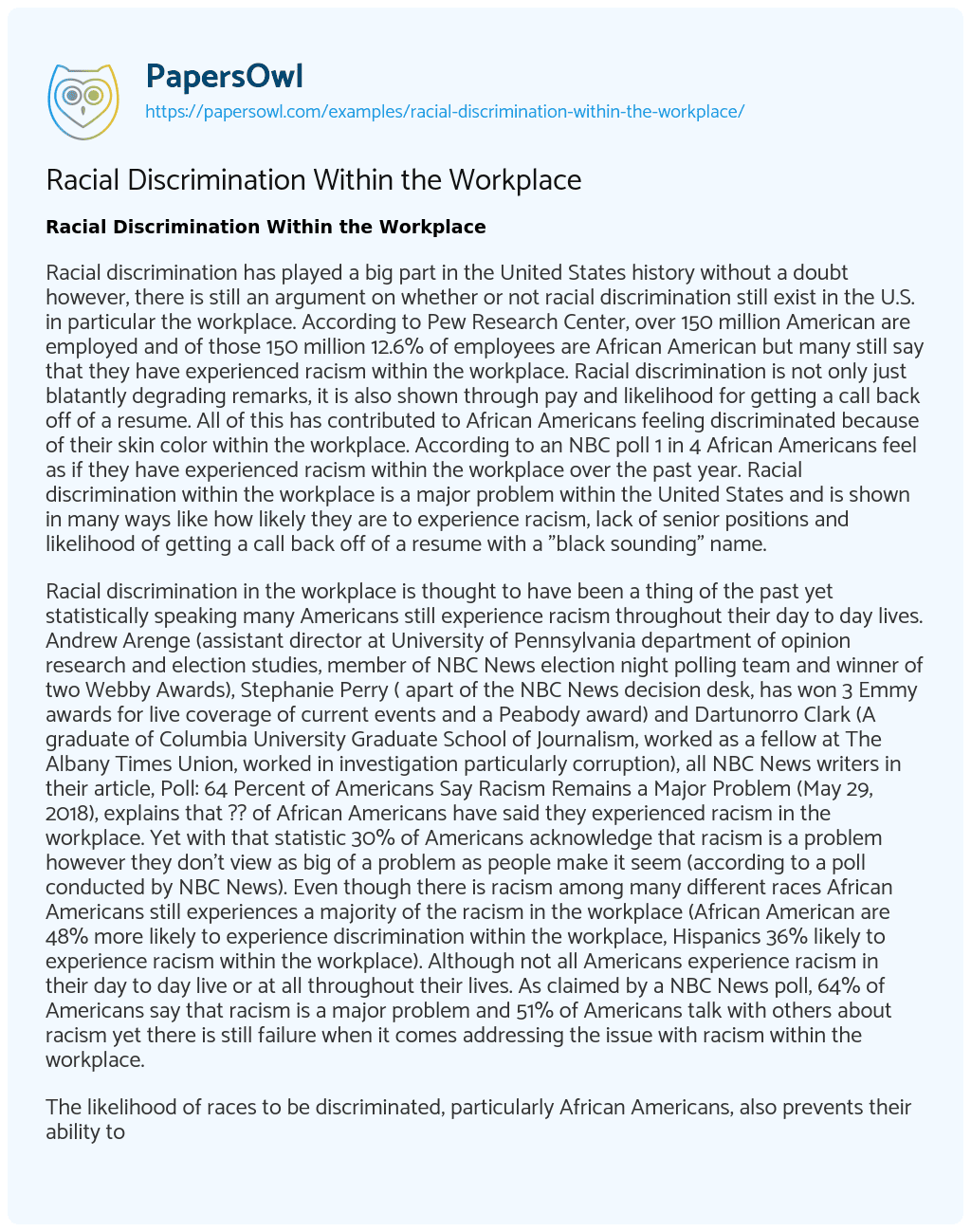 Racial discrimination in the workplace is thought to have been a thing of the past yet statistically speaking many Americans still experience racism throughout their day to day lives. Andrew Arenge (assistant director at University of Pennsylvania department of opinion research and election studies, member of NBC News election night polling team and winner of two Webby Awards), Stephanie Perry ( apart of the NBC News decision desk, has won 3 Emmy awards for live coverage of current events and a Peabody award) and Dartunorro Clark (A graduate of Columbia University Graduate School of Journalism, worked as a fellow at The Albany Times Union, worked in investigation particularly corruption), all NBC News writers in their article, Poll: 64 Percent of Americans Say Racism Remains a Major Problem (May 29, 2018), explains that ?? of African Americans have said they experienced racism in the workplace. Yet with that statistic 30% of Americans acknowledge that racism is a problem however they don’t view as big of a problem as people make it seem (according to a poll conducted by NBC News). Even though there is racism among many different races African Americans still experiences a majority of the racism in the workplace (African American are 48% more likely to experience discrimination within the workplace, Hispanics 36% likely to experience racism within the workplace). Although not all Americans experience racism in their day to day live or at all throughout their lives. As claimed by a NBC News poll, 64% of Americans say that racism is a major problem and 51% of Americans talk with others about racism yet there is still failure when it comes addressing the issue with racism within the workplace.

The likelihood of races to be discriminated, particularly African Americans, also prevents their ability to get a promotion within their job. James Anthony Becerra, a California bar certified lawyer, in his academic journal, Minimizing Subtle Racism Within the Workplace, argues black workers in the workforce are less likely to get promotions and not be in senior position. Becerra explains that in 2017 there were 32 million white workers in the private industry whereas only 17.5 million minorities are in the same business. Although this is not a very bultant form of discrimination it is one of the most noticeable subtle forms bring on another way that racism exist within the workplace. Becerra backs up this information with the statistic that  “…racial discrimination was the second most filled charge with the EEOC during the 2012 fiscal year…” According to data by the Equal Employment Opportunity Commission in 2017 the number of charges filed for discrimination concerning race was still the second most filed charge for that fiscal year. A line can be drawn from the two sources that the racism in the workplace is still persisting as the United States claims to progress; Becerra explains the importance of minimizing subtle racism and one could infer that by attacking issues lack of diversity in senior level position might aid in preventing the blatant racism.

Minority unemployment throughout the United States additionally coincides with the discrimination throughout the workplace in the first steps of getting a job: their resume. In Marianne Bertrand (professor of economics at University of Chicago Graduate School of Business focuses her research on racial bias within the United States) and Sendhil Mullainathan (professor of behavioral science, fellow at Chicago Booth and a recipient of Macarthur genius award) research in Discrimination in the Job Market in the United States, revealed that African Americans are more likely than whites to be unemployed. During their research they sent 5,000 resumes to ads for sales with either “black sounding” names or “white sounding” names in hopes to observe any patter on the number of call backs each category of name would produce. In Bertrand and Mullainathan results they explain that, “…race is still an important factor in the American labor market.”(Poverty Action Lab). They explain that the resumes with the whiter sounding names got 50% more call backs than those with the blacker sounding names, companies that stated they were nondiscriminatory in their ads discriminated just as much as the other businesses. Another finding among their study expresses that the resumes of whiter sounding names in richer neighborhood and better higher education  were receiving higher numbers of call backs than black names with the same association with richer neighborhoods and higher education. Their research brings even more light to the major issues that minorities face within the workplace even before becoming an employee of the business.

Despite some Americans thinking that racial discrimination within the workplace is a nonexistent problem, minorities within the the workplace are still at a disadvantage. Although the discrimination might be subtle it’s still affecting minorities throughout the U.S. however, there is away to prevent this discrimination. While it might be hard to change people’s mindset, putting federal regulation for business to have minimal to no complaints with the EEOC to be certified by the BBB as an approved business. By making this a requirement for businesses to be approved it will encourage stopping and preventing discrimination not only on a local scale but on a national level.

Racial Discrimination Within the Workplace. (2020, Apr 07). Retrieved from https://papersowl.com/examples/racial-discrimination-within-the-workplace/

Development of Discrimination in Workplace