What is Religious Discrimination? 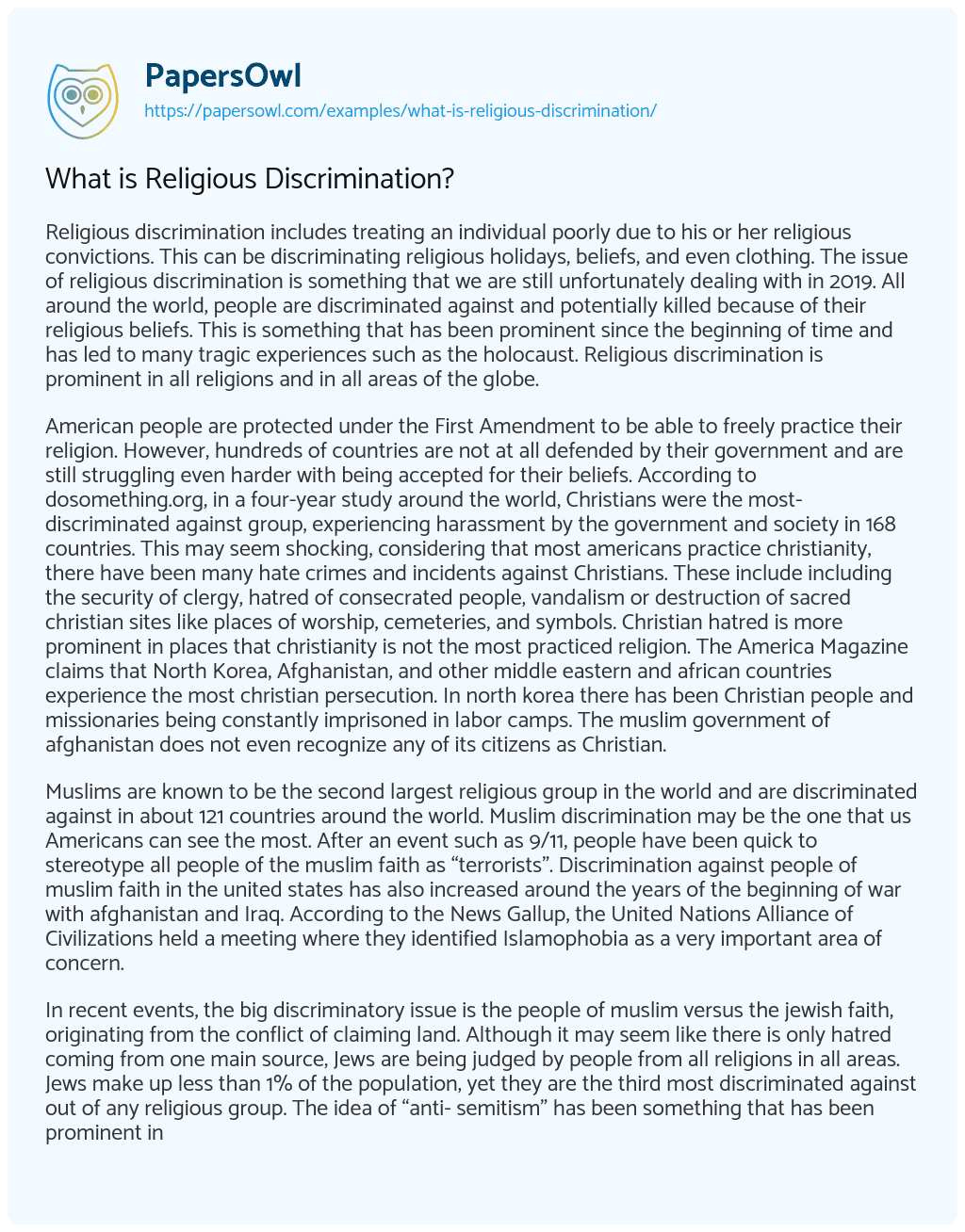 American people are protected under the First Amendment to be able to freely practice their religion. However, hundreds of countries are not at all defended by their government and are still struggling even harder with being accepted for their beliefs. According to dosomething.org, in a four-year study around the world, Christians were the most-discriminated against group, experiencing harassment by the government and society in 168 countries. This may seem shocking, considering that most americans practice christianity, there have been many hate crimes and incidents against Christians. These include including the security of clergy, hatred of consecrated people, vandalism or destruction of sacred christian sites like places of worship, cemeteries, and symbols. Christian hatred is more prominent in places that christianity is not the most practiced religion. The America Magazine claims that North Korea, Afghanistan, and other middle eastern and african countries experience the most christian persecution. In north korea there has been Christian people and missionaries being constantly imprisoned in labor camps. The muslim government of afghanistan does not even recognize any of its citizens as Christian.

Muslims are known to be the second largest religious group in the world and are discriminated against in about 121 countries around the world. Muslim discrimination may be the one that us Americans can see the most. After an event such as 9/11, people have been quick to stereotype all people of the muslim faith as “terrorists”. Discrimination against people of muslim faith in the united states has also increased around the years of the beginning of war with afghanistan and Iraq. According to the News Gallup, the United Nations Alliance of Civilizations held a meeting where they identified Islamophobia as a very important area of concern.

In recent events, the big discriminatory issue is the people of muslim versus the jewish faith, originating from the conflict of claiming land. Although it may seem like there is only hatred coming from one main source, Jews are being judged by people from all religions in all areas. Jews make up less than 1% of the population, yet they are the third most discriminated against out of any religious group. The idea of “anti- semitism” has been something that has been prominent in news lately. We know about the discrimination of the jewish people dating all the way back to the tragedy that was the holocaust. After such an event having ended so many years ago, jewish people still go through struggles today to not be discriminated against based off of their faith. A New York Times article was published just 5 days ago speaking on the rise on anti semitism today. from 2017 to 2018,rising to 39, the number of assaults against American Jews more than doubled according to a report released by the Anti-Defamation League. Last Saturday, during Passover services at a synagogue in San Diego County, a shooting occurred where one person was killed and three people were injured. It was later confirmed that the individual did this as a hate crime and came in with the goal that he “wanted to murder Jews.” For decades, the majority of American Jews could safely to practice their religion or be at their place of worship, but now the jews among other religions are unsafe.

I personally think that the national government needs upgraded forces to survey and share information on the actions of these people and groups. Government organizations should be enabled to routinely evaluate this risk and train officers on the most proficient method to address it. Discrimination even happens in the government as well as in any other profession. Government agressions include favoritism based off of religion, limiting growth within positions, foreign missionaries, attempts to eliminate a group, refusing practicing certain beliefs or rituals, attacking minority groups, etc. There also is discrimination and favoritism shown in schools. Not every single school recognizes religious holidays as necessary reasons for absences, as well as in the workplace. It seems to be acceptable and normal for someone to take off work for christmas, right? But what about someone having to take a day off of work to celebrate one of their holidays like Ramadan? there are a few states that have laws to help this. They make may further give extra affirmation to those who practice certain religions. These may include recognizing individuals who cant work on Saturdays or those who must take off for certain religious holidays, but this is not nationwide nor worldwide. Children who are raised on muslim faith have to be unexcused absence for a holiday for their belief, but already have a day off for the christian holiday of Good Friday. The same idea goes for the Jewish people and their holidays, and for the many other religions that there are out there.

Title VII of the Civil Rights Act of 1964 is a government law that restricts people from discriminating against someone’s religion. Title VII makes it illegal for businesses to discriminate against people solely based off of their religious background. The act also makes it illegal for businesses to fire or lower someone’s position because of their religious beliefs. Despite the laws made by the government, many of the states have additional laws that make religious discrimination pretty much illegal. Back in 1981, The United Nations General Assembly passed a Declaration for the “Elimination of All Forms of Intolerance and of Discrimination Based on Religion or Belief.” Although not an international law, it was the first international legal agreement that was based on the freedom of religion and religious expression. Continuing what they started with that declaration, the United Nations Commission on Human Rights then came up with the “”Special Rapporteur on Religion Intolerance.”” This was constructed to preserve individuals rights to change their religion or to even refrain from religious belief.

What is Religious Discrimination?. (2020, Apr 02). Retrieved from https://papersowl.com/examples/what-is-religious-discrimination/

Religious Discrimination Throughout Cultures and the Workplace