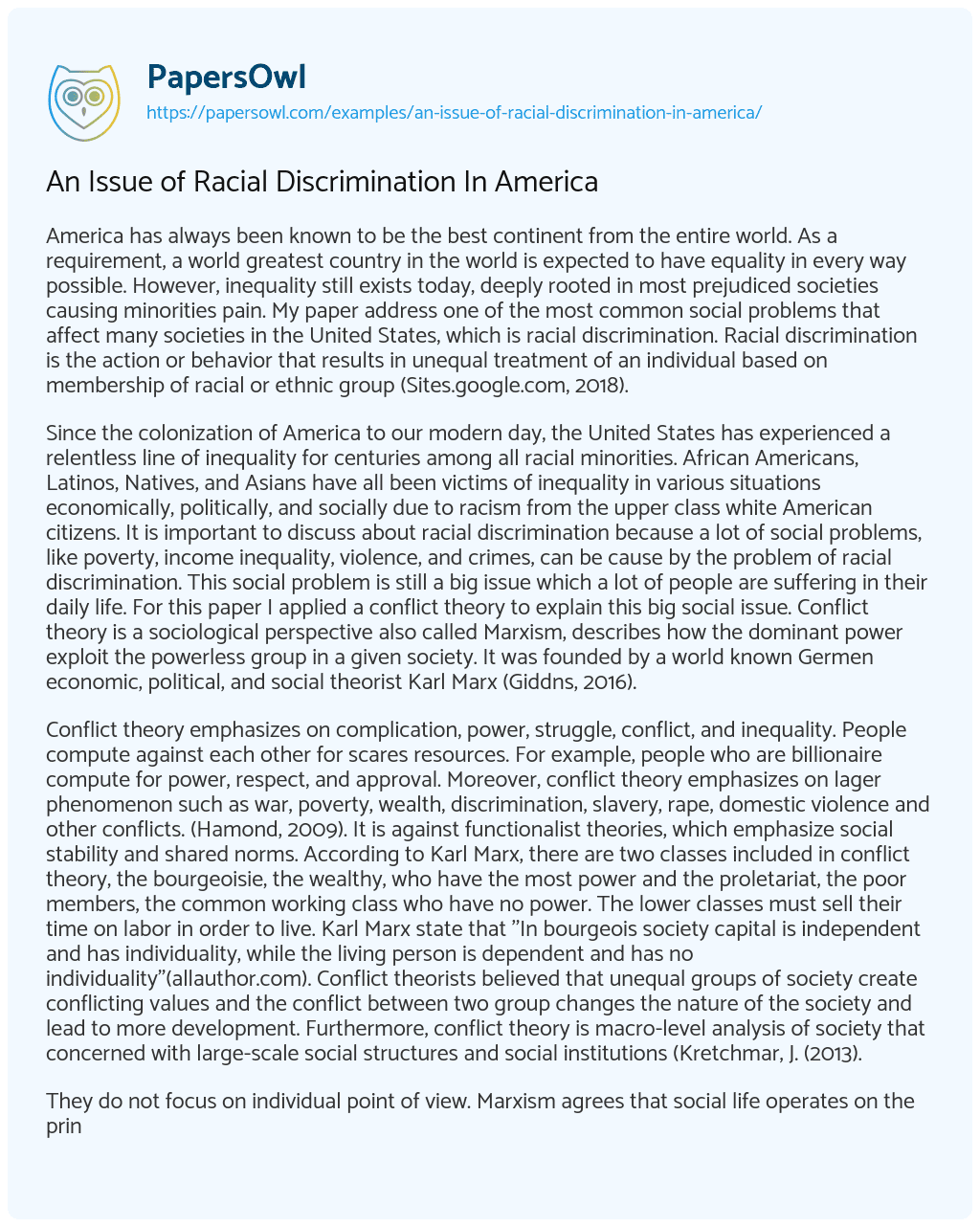 America has always been known to be the best continent from the entire world. As a requirement, a world greatest country in the world is expected to have equality in every way possible. However, inequality still exists today, deeply rooted in most prejudiced societies causing minorities pain. My paper address one of the most common social problems that affect many societies in the United States, which is racial discrimination. Racial discrimination is the action or behavior that results in unequal treatment of an individual based on membership of racial or ethnic group (Sites.google.com, 2018).

Since the colonization of America to our modern day, the United States has experienced a relentless line of inequality for centuries among all racial minorities. African Americans, Latinos, Natives, and Asians have all been victims of inequality in various situations economically, politically, and socially due to racism from the upper class white American citizens. It is important to discuss about racial discrimination because a lot of social problems, like poverty, income inequality, violence, and crimes, can be cause by the problem of racial discrimination. This social problem is still a big issue which a lot of people are suffering in their daily life. For this paper I applied a conflict theory to explain this big social issue. Conflict theory is a sociological perspective also called Marxism, describes how the dominant power exploit the powerless group in a given society. It was founded by a world known Germen economic, political, and social theorist Karl Marx (Giddns, 2016).

Conflict theory emphasizes on complication, power, struggle, conflict, and inequality. People compute against each other for scares resources. For example, people who are billionaire compute for power, respect, and approval. Moreover, conflict theory emphasizes on lager phenomenon such as war, poverty, wealth, discrimination, slavery, rape, domestic violence and other conflicts. (Hamond, 2009). It is against functionalist theories, which emphasize social stability and shared norms. According to Karl Marx, there are two classes included in conflict theory, the bourgeoisie, the wealthy, who have the most power and the proletariat, the poor members, the common working class who have no power. The lower classes must sell their time on labor in order to live. Karl Marx state that ”In bourgeois society capital is independent and has individuality, while the living person is dependent and has no individuality”(allauthor.com). Conflict theorists believed that unequal groups of society create conflicting values and the conflict between two group changes the nature of the society and lead to more development. Furthermore, conflict theory is macro-level analysis of society that concerned with large-scale social structures and social institutions (Kretchmar, J. (2013).

They do not focus on individual point of view. Marxism agrees that social life operates on the principles of cause and effect. Everything within society is caused by something else. (getrevising.co.uk ). One society can be a cause or an effect for the other society when creating interaction with each other by conflict. Conflict theory is more like feudalism system, which one society are less beneficial than the others and don’t have the equal right to gain access. In general, conflict theory sees society as less cohesive system and more of an area of competition and power struggle. The Conflict theorists see racial inequalities as a process to find dominance and power. According to conflict theorists, racial discrimination results from the endless competition among groups for power, wealth, status, and other valuable social resources (nhossan, 2018).

As we are demanding the scarce resources and power, we are always in a battle for power and those in power are continues to strive to maintain their dominance by pulling down those without power. People started to classify different people into difference “race” mainly by their skin color since the colonial period. As demonstrated in the New York Times article ”You Are Still Black’: Charlottesville’s Racial Divide Hinders Students” by Erica L. Green and Annie Waldman, two young African American women grew up in different school environments with one being an ultimately white school and the other dominantly black but were still caught by inequality despite one obtaining a better education. The two were discriminated because of their race and economic background since they were thought to have less potential than white citizen’s which involves a conflict theory to the matter where minorities are stratified and given less opportunities as compared to the fortunate because of their overall status in life. Furthermore, racial discrimination continues to occur in housing, employment, health, criminal justice, income, wealth, and other areas. According to hbr.org, since 1990 white applicants received, on average, 36% more callbacks than black applicants and 24% more callbacks than Latino applicants with identical rasism (Quillian et al., 2018).

This data shows how white people have priorities than any other race, which is a clear evidence of discrimination on both Latino and black applicant. By observing this data, we can understand that the racial structure is built to pull down the power of the blacks and kept the power of the whites which forms a racial discrimination. This shows the division of classes among people that is explained under conflict theory. Besides, by dividing different races in the workplace, the employer can make more profit from a racially divided working class than from a united one and the white employers could hire the blacks cheaper than the whites to maintain maximum profit from their business (Sites.google.com, 2018). In general, blacks are kept on being discriminated and have less power on completing resources such as education, housing, healthcare with the whites and let the whites kept dominant in using these in the society. Among the strength of applying conflict theory, it is really good at helping people understand the social mechanics behind competing groups, and especially competing groups for which there’s a significant power differential. Therefore, when people compute, they work hard and benefit a country on the side. Moreover, it is good in the views large group of society . It recognizes multiple groups in society who do not necessarily share similar values, beliefs, opportunities. People will try to overcome problems by making themselves strong find themselves.

Among the weakness of applying conflict theory, it doesn’t often explain very well why people work together and cooperate. Most people go to work not just because their bosses force them to, but because there’s a mutually beneficial relationship between workers and their employers because they obtain some intrinsic enjoyment from the work they do. In addition, argues that social systems are like organs in a body that work together toward a common purpose or shared goal. It decreases the chance of people helping each other and creating social interaction. Besides, it assumes people are rational who seek to maximize status at the expense of others and sees conflict as inevitable.

An Issue of Racial Discrimination In America. (2019, Jul 28). Retrieved from https://papersowl.com/examples/an-issue-of-racial-discrimination-in-america/