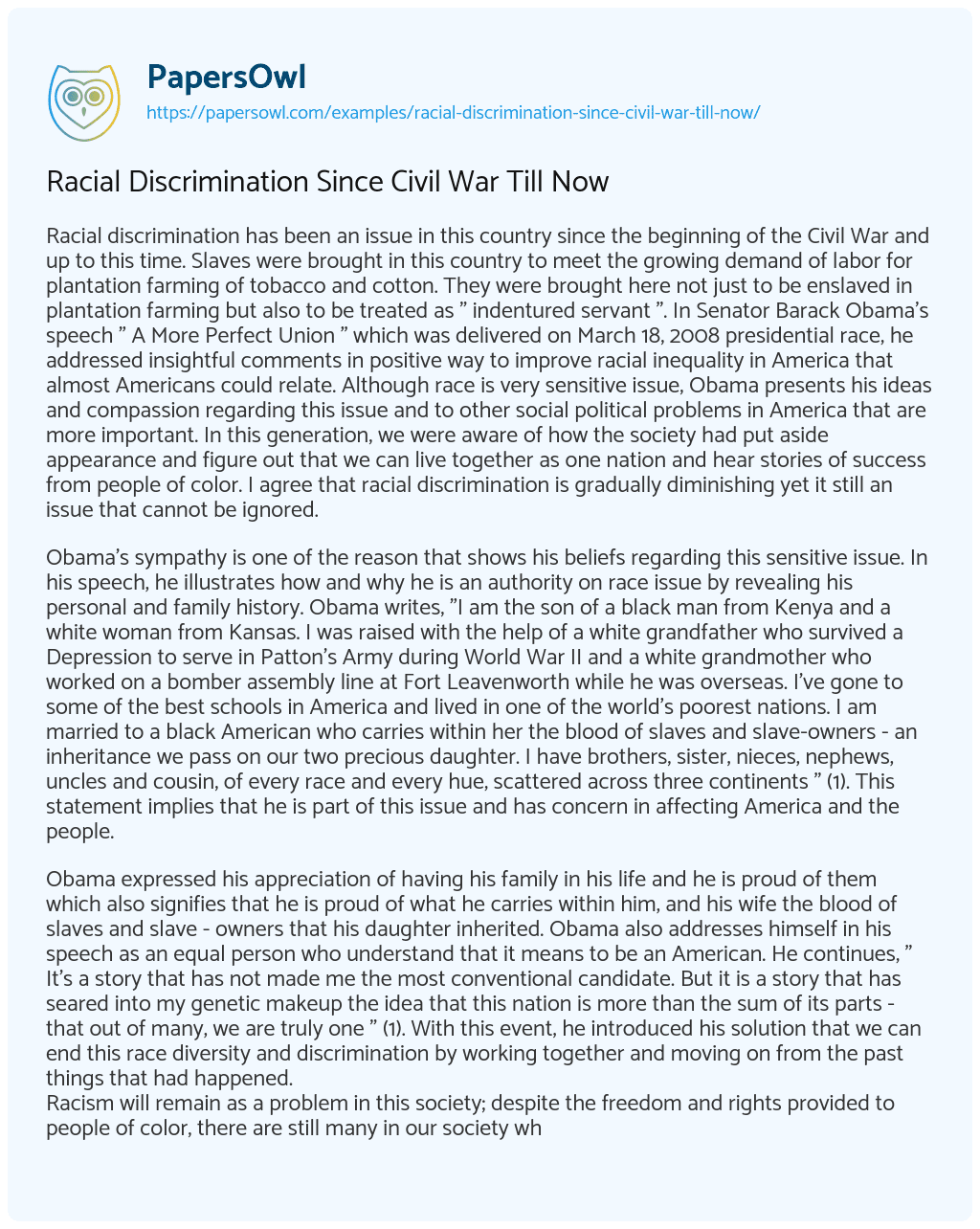 Racial discrimination has been an issue in this country since the beginning of the Civil War and up to this time. Slaves were brought in this country to meet the growing demand of labor for plantation farming of tobacco and cotton. They were brought here not just to be enslaved in plantation farming but also to be treated as ” indentured servant “. In Senator Barack Obama’s speech ” A More Perfect Union ” which was delivered on March 18, 2008 presidential race, he addressed insightful comments in positive way to improve racial inequality in America that almost Americans could relate. Although race is very sensitive issue, Obama presents his ideas and compassion regarding this issue and to other social political problems in America that are more important. In this generation, we were aware of how the society had put aside appearance and figure out that we can live together as one nation and hear stories of success from people of color. I agree that racial discrimination is gradually diminishing yet it still an issue that cannot be ignored.

Obama’s sympathy is one of the reason that shows his beliefs regarding this sensitive issue. In his speech, he illustrates how and why he is an authority on race issue by revealing his personal and family history. Obama writes, “I am the son of a black man from Kenya and a white woman from Kansas. I was raised with the help of a white grandfather who survived a Depression to serve in Patton’s Army during World War II and a white grandmother who worked on a bomber assembly line at Fort Leavenworth while he was overseas. I’ve gone to some of the best schools in America and lived in one of the world’s poorest nations. I am married to a black American who carries within her the blood of slaves and slave-owners – an inheritance we pass on our two precious daughter. I have brothers, sister, nieces, nephews, uncles and cousin, of every race and every hue, scattered across three continents ” (1). This statement implies that he is part of this issue and has concern in affecting America and the people.

Obama expressed his appreciation of having his family in his life and he is proud of them which also signifies that he is proud of what he carries within him, and his wife the blood of slaves and slave – owners that his daughter inherited. Obama also addresses himself in his speech as an equal person who understand that it means to be an American. He continues, ” It’s a story that has not made me the most conventional candidate. But it is a story that has seared into my genetic makeup the idea that this nation is more than the sum of its parts – that out of many, we are truly one ” (1). With this event, he introduced his solution that we can end this race diversity and discrimination by working together and moving on from the past things that had happened.
Racism will remain as a problem in this society; despite the freedom and rights provided to people of color, there are still many in our society who were against of allowing them to be given the chance and liberty to freely lived in this country. With Civil Right Movement, slavery should have ended; however, the perception of racial difference still exist especially in some part of the United

State where they cannot free themselves from segregating black and white in some other public places.
People from different race were being judged by the color of their skin in the eyes of some White Americans. As an example, In the southern part of the country where White Supremacist group are still present, there are still some tensions between White and African – American when resolving their problems but it is worth to say that discrimination has been lessen in our school system, housing, employment and minorities are now able to set and achieved their goals without fear of racial discrimination.

Race will still remain as an issue that we cannot ignore and will always come as a question into our lives no matter what changes is made on racial equality. I believed that racial relations have improved greatly over that last decades. Racial divide in this country might not yet really healed and the memories from the past might still scared some of us especially those African – American descents but we should not let our weaknesses overcome our strength. I also believed as a part of this society, we should not allow our anger and hostility in racial diversity and discrimination define us. Instead, Americans should come together as a strong and great nation for our next generation.

Influence of Racial Discrimination and Stereotyping