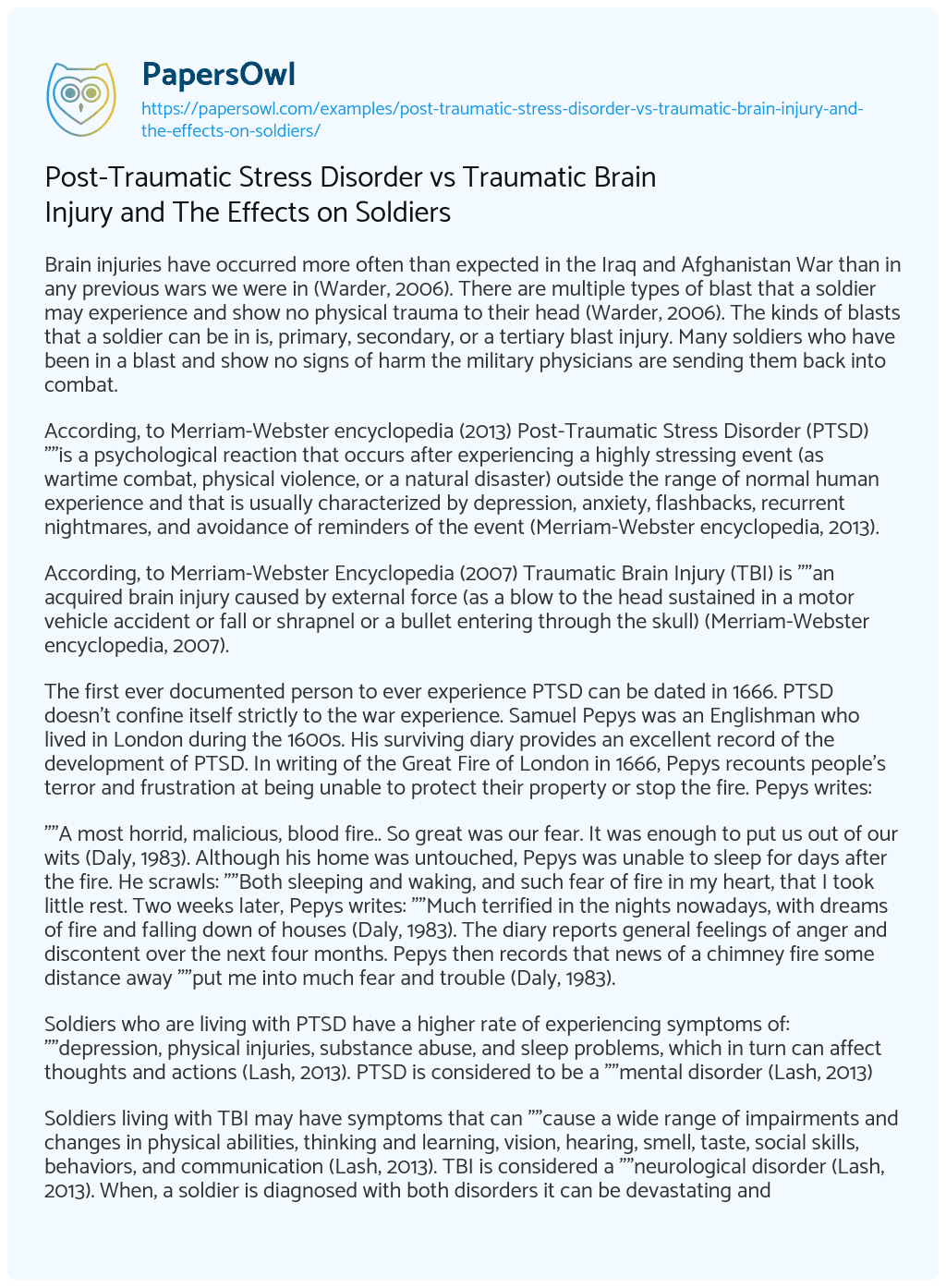 Brain injuries have occurred more often than expected in the Iraq and Afghanistan War than in any previous wars we were in (Warder, 2006). There are multiple types of blast that a soldier may experience and show no physical trauma to their head (Warder, 2006). The kinds of blasts that a soldier can be in is, primary, secondary, or a tertiary blast injury. Many soldiers who have been in a blast and show no signs of harm the military physicians are sending them back into combat.

According, to Merriam-Webster encyclopedia (2013) Post-Traumatic Stress Disorder (PTSD) “”is a psychological reaction that occurs after experiencing a highly stressing event (as wartime combat, physical violence, or a natural disaster) outside the range of normal human experience and that is usually characterized by depression, anxiety, flashbacks, recurrent nightmares, and avoidance of reminders of the event (Merriam-Webster encyclopedia, 2013).

According, to Merriam-Webster Encyclopedia (2007) Traumatic Brain Injury (TBI) is “”an acquired brain injury caused by external force (as a blow to the head sustained in a motor vehicle accident or fall or shrapnel or a bullet entering through the skull) (Merriam-Webster encyclopedia, 2007).

The first ever documented person to ever experience PTSD can be dated in 1666. PTSD doesn’t confine itself strictly to the war experience. Samuel Pepys was an Englishman who lived in London during the 1600s. His surviving diary provides an excellent record of the development of PTSD. In writing of the Great Fire of London in 1666, Pepys recounts people’s terror and frustration at being unable to protect their property or stop the fire. Pepys writes:

“”A most horrid, malicious, blood fire.. So great was our fear. It was enough to put us out of our wits (Daly, 1983). Although his home was untouched, Pepys was unable to sleep for days after the fire. He scrawls: “”Both sleeping and waking, and such fear of fire in my heart, that I took little rest. Two weeks later, Pepys writes: “”Much terrified in the nights nowadays, with dreams of fire and falling down of houses (Daly, 1983). The diary reports general feelings of anger and discontent over the next four months. Pepys then records that news of a chimney fire some distance away “”put me into much fear and trouble (Daly, 1983).

Soldiers who are living with PTSD have a higher rate of experiencing symptoms of: “”depression, physical injuries, substance abuse, and sleep problems, which in turn can affect thoughts and actions (Lash, 2013). PTSD is considered to be a “”mental disorder (Lash, 2013)

Soldiers living with TBI may have symptoms that can “”cause a wide range of impairments and changes in physical abilities, thinking and learning, vision, hearing, smell, taste, social skills, behaviors, and communication (Lash, 2013). TBI is considered a “”neurological disorder (Lash, 2013). When, a soldier is diagnosed with both disorders it can be devastating and overwhelming. TBI and PTSD can “”feed and reinforces the other (Lash, 2013).

Studying parts of the brain involved in dealing with fear and stress also helps researchers to better understand possible causes of PTSD. One such brain structure is the amygdala, known for its role in emotion, learning, and memory. The amygdala appears to be active in fear acquisition, or learning to fear an event (such as touching a hot stove), as well as in the early stages of fear extinction, or learning not to fear.

Storing extinction memories and dampening the original fear response appears to involve the prefrontal cortex (PFC) area of the brain, involved in tasks such as decision-making, problem-solving, and judgment. Certain areas of the PFC play slightly different roles. For example, when it deems a source of stress controllable, the medial PFC suppresses the amygdala an alarm center deep in the brainstem and controls the stress response. The ventromedial PFC helps sustain long-term extinction of fearful memories, and the size of this brain area may affect its ability to do so.

Individual differences in these genes or brain areas may only set the stage for PTSD without causing symptoms. Environmental factors, such as childhood trauma, head injury, or a history of mental illness, may further increase a person’s risk by affecting the early growth of the brain. Also, personality and cognitive factors, such as optimism and the tendency to view challenges in a positive or negative way, as well as social factors, such as the availability and use of social support, appear to influence how people adjust to trauma. More research may show what combinations of these or perhaps other factors could be used someday to predict who will develop PTSD following a traumatic event.

Currently, people with PTSD may be treated with psychotherapy (“”talk therapy), medications, or a combination of the two. Cognitive behavioral therapy (CBT) teaches different ways of thinking and reacting to the frightening events that trigger PTSD symptoms and can help bring those symptoms under control.

In the last decade, rapid progress in research on the mental and biological foundations of PTSD has led scientists to focus on prevention as a realistic and important goal. For example, NIMH-funded researchers are exploring new and orphan medications thought to target underlying causes of PTSD in an effort to prevent the disorder. Other research is attempting to enhance cognitive, personality, and social protective factors and to minimize risk factors to ward off full-blown PTSD after a trauma. Still other research is attempting to identify what factors determine whether someone with PTSD will respond well to one intervention or another, aiming to develop more personalized, effective and efficient treatments.

Ivan Petrovitch Pavlov related classical conditioning with PTSD, by associating anxious behavior with neurobiology. Ivan was able to “”show that a neutral or meaningless stimulus could evoke a response in an organism, if the response was conditioned by pairing the previously neutral stimulus with one that naturally evokes a response in the organism (Friedman & Keane, 2016, pg. 39).

Keane make the suggestion that soldiers learn on how to disengage their thoughts and feelings because of going through basic training. He believes that the soldier is taught not to feel or talk about their feelings, that they become robots. Robots do not understand what feelings or what emotions are. These behaviors are reinforced by positive and negative reactions. On the positive reinforcement, the soldier has a “”goal (Friedman & Keane, 2016, pg. 57) in mind and completes that goal, such as: complete basic training. On the “”negative reinforcement”” (Friedman & Keane, 2016, pg. 57) the soldier will wonder what consequences will he have to endure if he expresses his anger.

Post-Traumatic Stress Disorder vs Traumatic Brain Injury and The Effects on Soldiers. (2019, Nov 10). Retrieved from https://papersowl.com/examples/post-traumatic-stress-disorder-vs-traumatic-brain-injury-and-the-effects-on-soldiers/