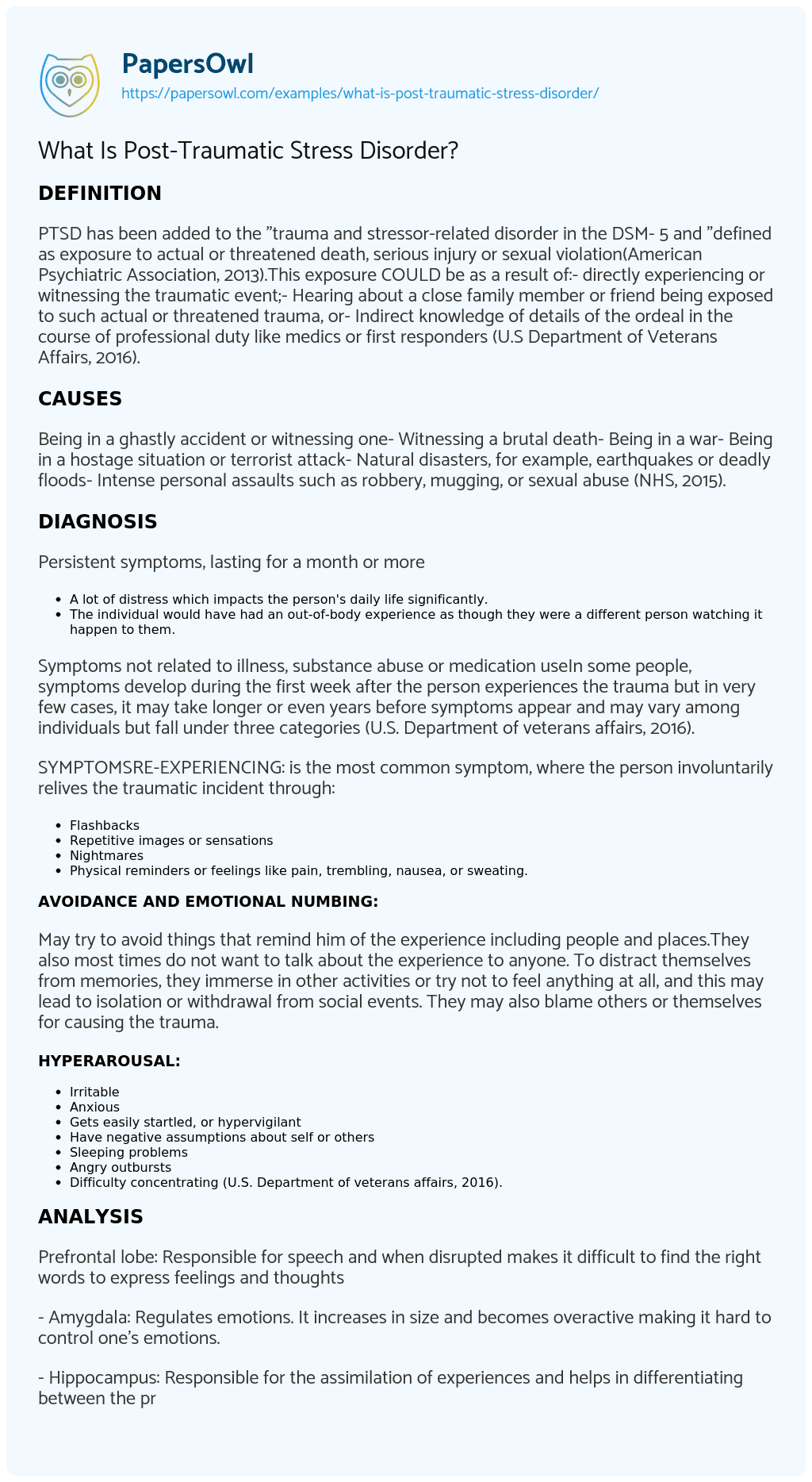 PTSD has been added to the “trauma and stressor-related disorder in the DSM- 5 and “defined as exposure to actual or threatened death, serious injury or sexual violation(American Psychiatric Association, 2013).This exposure COULD be as a result of:- directly experiencing or witnessing the traumatic event;- Hearing about a close family member or friend being exposed to such actual or threatened trauma, or- Indirect knowledge of details of the ordeal in the course of professional duty like medics or first responders (U.S Department of Veterans Affairs, 2016).

Being in a ghastly accident or witnessing one- Witnessing a brutal death- Being in a war- Being in a hostage situation or terrorist attack- Natural disasters, for example, earthquakes or deadly floods- Intense personal assaults such as robbery, mugging, or sexual abuse (NHS, 2015).

Persistent symptoms, lasting for a month or more

Symptoms not related to illness, substance abuse or medication useIn some people, symptoms develop during the first week after the person experiences the trauma but in very few cases, it may take longer or even years before symptoms appear and may vary among individuals but fall under three categories (U.S. Department of veterans affairs, 2016).

SYMPTOMSRE-EXPERIENCING: is the most common symptom, where the person involuntarily relives the traumatic incident through:

May try to avoid things that remind him of the experience including people and places.They also most times do not want to talk about the experience to anyone. To distract themselves from memories, they immerse in other activities or try not to feel anything at all, and this may lead to isolation or withdrawal from social events. They may also blame others or themselves for causing the trauma.

Prefrontal lobe: Responsible for speech and when disrupted makes it difficult to find the right words to express feelings and thoughts

– Hippocampus: Responsible for the assimilation of experiences and helps in differentiating between the present and past memory. It reduces in size causing a temporary loss of short-term memory resulting in flashbacks.

– Ventromedial prefrontal cortex: Responsible for regulating response to fear and emotions. Its size reduces, and so does its ability to manage or control emotions thereby causing extreme stress, anxiety, and hypervigilance.

– The fkbp5 gene promotes the development of PTSD. It is the reason why two people when exposed to the same trauma have different reactions to it (Klengel, 2016)

– A person whose family has a history of anxiety is more susceptible to developing PTSD after a trauma.- Psychological factors include low self-esteem, negative views about one’s self and poor coping skills (Cohen, 2014).

– Social factors include little or no social support or sense of belonging, as well as the severity of the trauma. Learning model: People with PTSD use negative reinforcement as they try to avoid activities, thoughts, people, feelings, or things that would remind them of the trauma. Some would turn to substance abuse, alcoholism, or other destructive behaviors just to distract themselves from the feelings.

Using myself as the case study having suffered PTSD and still learning to thrive with it, I would say that early intervention is very important. Most people do not treat a headache until it gets really bad. Most are not interested in prevention, and only wait till it’s late to look for a cure. No one in my family understood what I was going through or knew anything about PTSD till after my diagnoses so, they did not know how to help and I was left to fight my demons alone.

Most people who experience a trauma would normally improve after a few days or weeks, but if after a month the symptoms are still severe and troubling then, the following options are recommended:

PTSD is not caused by only physical injuries but also by psychological injury to the emotional state of mind. Most of the information about PTSD on the internet are related to trauma from being in the war but, so many people who have not been anywhere near a war zone suffer PTSD. More information needs to be circulated about the causes, symptoms, and treatment of PTSD to help families who have a member suffering from PTSD understand what is happening and how to help. Also, early intervention after a trauma could help reduce the effects of PTSD. Though it can not be cured a 100%, people can still learn to thrive with it. Lastly, no one no matter their age or status in life is immune to it, and no two people have the same exact reactions to a trauma.

What Is Post-Traumatic Stress Disorder?. (2019, Dec 02). Retrieved from https://papersowl.com/examples/what-is-post-traumatic-stress-disorder/

My Research on Post-Traumatic Stress Disorder