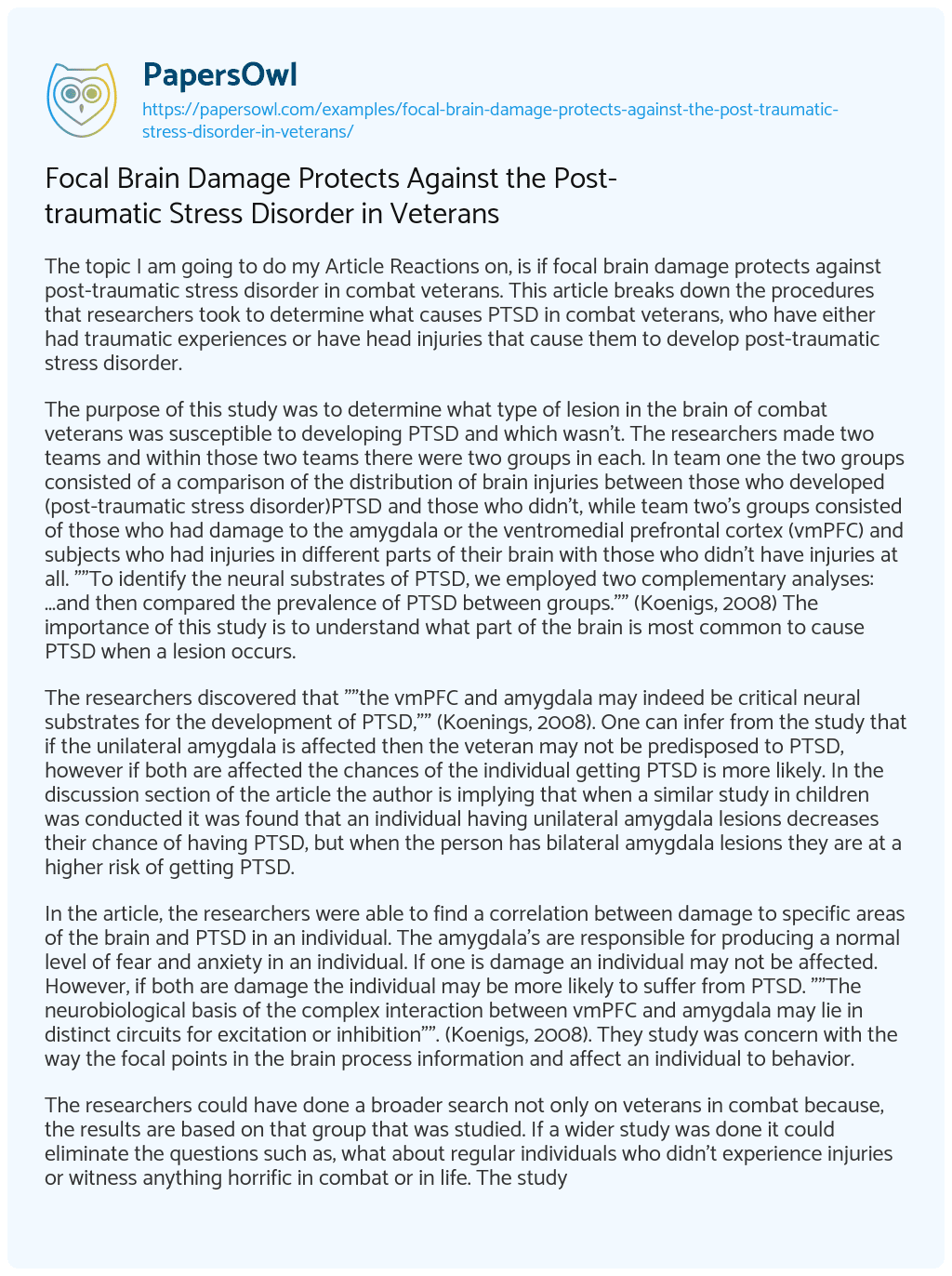 The topic I am going to do my Article Reactions on, is if focal brain damage protects against post-traumatic stress disorder in combat veterans. This article breaks down the procedures that researchers took to determine what causes PTSD in combat veterans, who have either had traumatic experiences or have head injuries that cause them to develop post-traumatic stress disorder.

The purpose of this study was to determine what type of lesion in the brain of combat veterans was susceptible to developing PTSD and which wasn’t. The researchers made two teams and within those two teams there were two groups in each. In team one the two groups consisted of a comparison of the distribution of brain injuries between those who developed (post-traumatic stress disorder)PTSD and those who didn’t, while team two’s groups consisted of those who had damage to the amygdala or the ventromedial prefrontal cortex (vmPFC) and subjects who had injuries in different parts of their brain with those who didn’t have injuries at all. “”To identify the neural substrates of PTSD, we employed two complementary analyses: …and then compared the prevalence of PTSD between groups.”” (Koenigs, 2008) The importance of this study is to understand what part of the brain is most common to cause PTSD when a lesion occurs.

The researchers discovered that “”the vmPFC and amygdala may indeed be critical neural substrates for the development of PTSD,”” (Koenings, 2008). One can infer from the study that if the unilateral amygdala is affected then the veteran may not be predisposed to PTSD, however if both are affected the chances of the individual getting PTSD is more likely. In the discussion section of the article the author is implying that when a similar study in children was conducted it was found that an individual having unilateral amygdala lesions decreases their chance of having PTSD, but when the person has bilateral amygdala lesions they are at a higher risk of getting PTSD.

In the article, the researchers were able to find a correlation between damage to specific areas of the brain and PTSD in an individual. The amygdala’s are responsible for producing a normal level of fear and anxiety in an individual. If one is damage an individual may not be affected. However, if both are damage the individual may be more likely to suffer from PTSD. “”The neurobiological basis of the complex interaction between vmPFC and amygdala may lie in distinct circuits for excitation or inhibition””. (Koenigs, 2008). They study was concern with the way the focal points in the brain process information and affect an individual to behavior.

The researchers could have done a broader search not only on veterans in combat because, the results are based on that group that was studied. If a wider study was done it could eliminate the questions such as, what about regular individuals who didn’t experience injuries or witness anything horrific in combat or in life. The study could be improved by studying individuals with focal damage to the brain and their reaction to stress, that would be able to answer any unanswered questions that others may have.

The research was relevant to show how individual with lesion to the amygdala or vmPFC which is locate at the bottom of the brain and process fear and risk signals in the brain is affected when damage. The focal areas of the brain that is affected will cause the individual to have flashbacks. The individual will re-live their horrific experience as if it is happening to them at that moment. There may be different trigger that can contribute to a person to having a traumatic or emotional feeling.