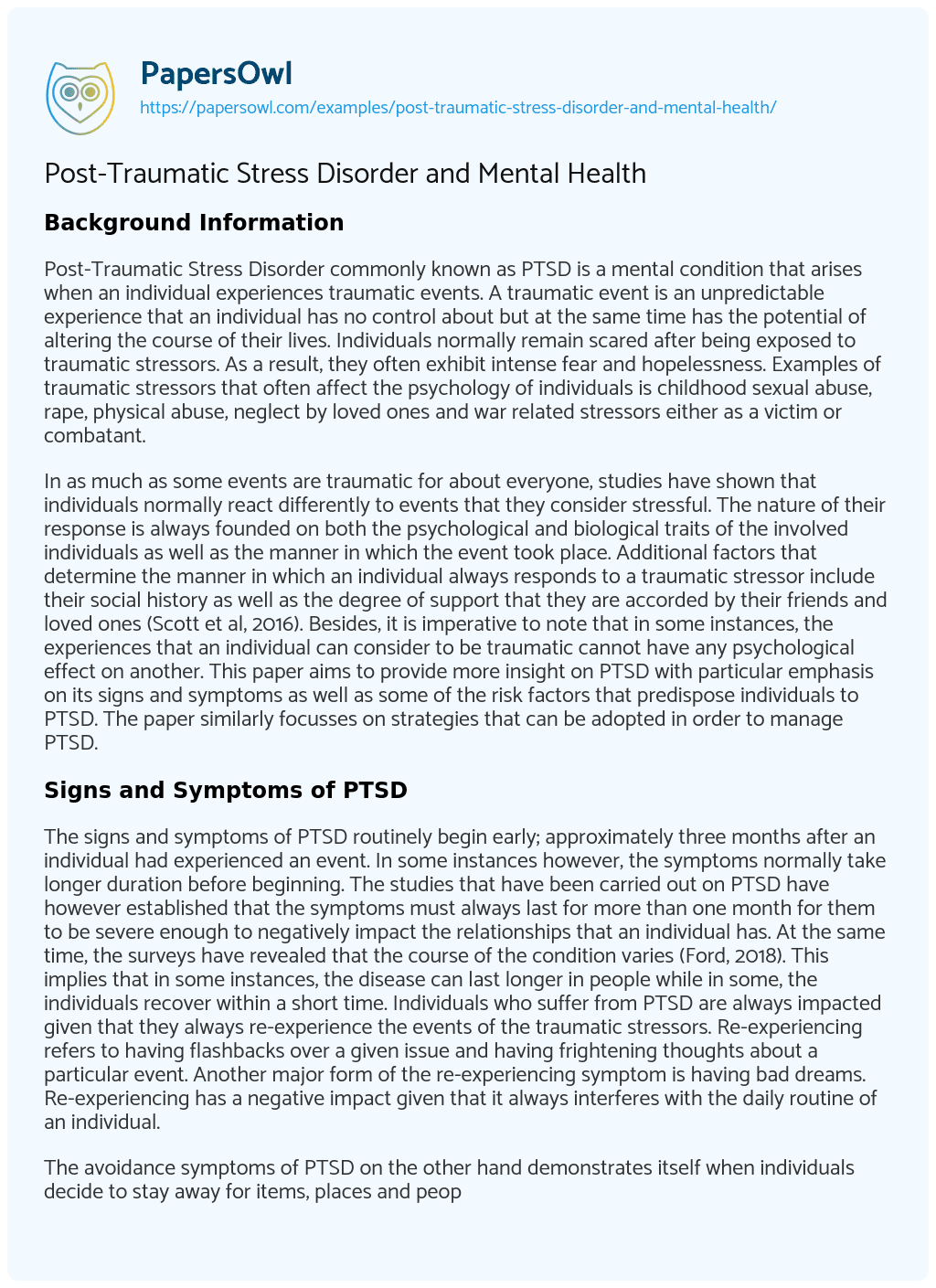 Post-Traumatic Stress Disorder commonly known as PTSD is a mental condition that arises when an individual experiences traumatic events. A traumatic event is an unpredictable experience that an individual has no control about but at the same time has the potential of altering the course of their lives. Individuals normally remain scared after being exposed to traumatic stressors. As a result, they often exhibit intense fear and hopelessness. Examples of traumatic stressors that often affect the psychology of individuals is childhood sexual abuse, rape, physical abuse, neglect by loved ones and war related stressors either as a victim or combatant.

In as much as some events are traumatic for about everyone, studies have shown that individuals normally react differently to events that they consider stressful. The nature of their response is always founded on both the psychological and biological traits of the involved individuals as well as the manner in which the event took place. Additional factors that determine the manner in which an individual always responds to a traumatic stressor include their social history as well as the degree of support that they are accorded by their friends and loved ones (Scott et al, 2016). Besides, it is imperative to note that in some instances, the experiences that an individual can consider to be traumatic cannot have any psychological effect on another. This paper aims to provide more insight on PTSD with particular emphasis on its signs and symptoms as well as some of the risk factors that predispose individuals to PTSD. The paper similarly focusses on strategies that can be adopted in order to manage PTSD.

Signs and Symptoms of PTSD

The signs and symptoms of PTSD routinely begin early; approximately three months after an individual had experienced an event. In some instances however, the symptoms normally take longer duration before beginning. The studies that have been carried out on PTSD have however established that the symptoms must always last for more than one month for them to be severe enough to negatively impact the relationships that an individual has. At the same time, the surveys have revealed that the course of the condition varies (Ford, 2018). This implies that in some instances, the disease can last longer in people while in some, the individuals recover within a short time. Individuals who suffer from PTSD are always impacted given that they always re-experience the events of the traumatic stressors. Re-experiencing refers to having flashbacks over a given issue and having frightening thoughts about a particular event. Another major form of the re-experiencing symptom is having bad dreams. Re-experiencing has a negative impact given that it always interferes with the daily routine of an individual.

The avoidance symptoms of PTSD on the other hand demonstrates itself when individuals decide to stay away for items, places and people who remind them of the event that they experienced. It is equally demonstrated by the aspect of individuals trying so hard to avoid having negative thoughts on the traumatic stressor that they experienced. Another major symptom of PTSD is that the individuals who are affected by it normally have trouble remembering some of the main aspects of the traumatic events that they experienced (Cash, 2016). Besides, they always have negative thoughts about the world and themselves, which makes them, feel ashamed for their helplessness and guilty given that it happened to them. At the same the individuals affected by PTSD always appear to lose interest in some of the activities that they used to enjoy in the past.

It is important to note that the manner in which children react to traumatic stressors is different from the manner in which adults respond. For those who are below six years, the children tend to wet the bed even after they had learned how to use the toilet. In addition, they always forget the manner in which they are supposed to talk, as they are not free. As such, they normally act scary even during playtimes and often feel comfortable only in the presence of the people who they care about such as their parents and loved ones. Due to this, they normally cling to them for the fear of going through the negative incident again. Elder children on the other hand always act in the same manner as parents (Ford, 2018). However, they always have the negative desire to revenge. Given the factors highlighted above, it is imperative for healthcare providers to be on alert, for that is the only way that they will be able to diagnose and effectively manage the condition. In most instances, individuals who develop PTSD always suffer in silence because they are afraid of being victimized and being labeled weak.

Contrary to the common misconception that only adults always develop PTSD, the condition can be contacted by individuals across different age groups including children.One of the factors that increase the risk of individuals developing PTSD is being continuously exposed to traumatic events. Another risk factor is getting hurt and not being offered any social support. Having a history of substance abuse and mental health issues is another factor that increases the risk of developing PTSD. Some of the studies that have been carried out on PTSD have equally revealed that there is an association between genetics and PTSD (Moore et al, 2011). This implies that there are individuals who are genetically predisposed to developing PTSD. In this regard, it is imperative for individuals to always ensure that each time they are exposed to a traumatic stressor, they seek out help. This is largely because the support offered by friends and family members is integral in helping individuals overcoming the negative feelings that arise after being exposed to a traumatic stressor. At the same time, it is imperative for individuals to always be willing to speak up. Opening up is important given that it helps the people close to you in knowing that you are going through a difficult time, which will make them offer much needed support. PTSD and

In as much as some events are normally traumatic for everyone, individuals react to stressful events differently based on their psychological and biological traits. This implies that experiencing stressful events does not necessarily result in psychological trauma, and even in instances where there is psychologically trauma not everyone develops PTSD. The studies that have been carried out on PTSD have established that about 10% of the males who are normally exposed to traumatic stressors normally develop PTSD with 20% of females equally developing the condition (Ford 2018).

The variation in gender is largely due to the unfortunate aspect that women and girls are more like to be victims of sexual violence unlike males. Immediately after an individual has been exposed to a traumatic event, they tend to dissociate from the people and activities that they like. Besides, they often have intrusive memories, which impact them negatively. In this regard, they always try to avoid the unwanted memories by using excuses such as exhaustion, high fatigue, preoccupation and being hyper-vigilant (Ford, 2018). Whereas the reactions above always arise immediately after a traumatic event, they are normally expected to disappear within a duration of four weeks. Once the 4 week duration has elapsed, the individual always develops a mental condition known as acute stressful disorder. Acute stressful disorder is a condition that can only be made twenty-eight days after experiencing a traumatic event. The 28 day window is an indication that in an instance where the reactions to a traumatic event often persist and interfere with the life of a person for more than a month, then they should no longer be considered to be acute but should be referred to as posttraumatic stress reactions, hence the term PTSD. The most common outcomes that arise after being exposed to a traumatic stressor are believed to be positive in nature and are always denotes with the 3 Rs.

The first R stands for Resistance and implies that successfully coping with situations that are acutely stressful often brings about difficulties in other areas of life such as work, relationships, physical health and psychological health. The second R stands for Resilience, which denotes successfully coping with the traumatic events that are normally acute. This involves adjusting and functioning well even in the face of the challenges that normally arise. The third R stands for Recovery and refers to the regaining of good health and ability to operate after being exposed to a traumatic stressor (Cash, 2016). A key element of recovery is post-traumatic growth, which is the concept of acquiring new skills and knowledge regarding a given issue. This is important, as it always makes individuals form new relationships that are productive and help them in succeeding across various aspects of life. It is similarly important to note that individuals who are exposed to traumatic stressors are at high risk of developing additional mental conditions such as debilitating grief, anxiety, bipolar disorders. There is equally the possibility of the individuals developing violence, anger and suicidal thoughts.

In concluding, it is important to note that exposure to traumatic stress serves the purpose of increasing the risk of individuals developing PTSD. At the same time, it increases the risk of the individuals developing psychosocial and behavioral problems. This implies that in an instance where other risk factors such as the genetics of individuals are lacking then post-traumatic stress may tip the scales (Ford, 2018). Preventing PTSD and helping people to recover from the condition always requires an individualized approach to care. Most of the treatment approaches revolve around educating the individuals suffering from the condition on how best they can direct positive directories in their lives. At the same time, it is imperative for the administration of a lot of medicines to be restricted, as concerns have been raised that over the course of the past few years children and adults have been subjected to a lot of drugs.