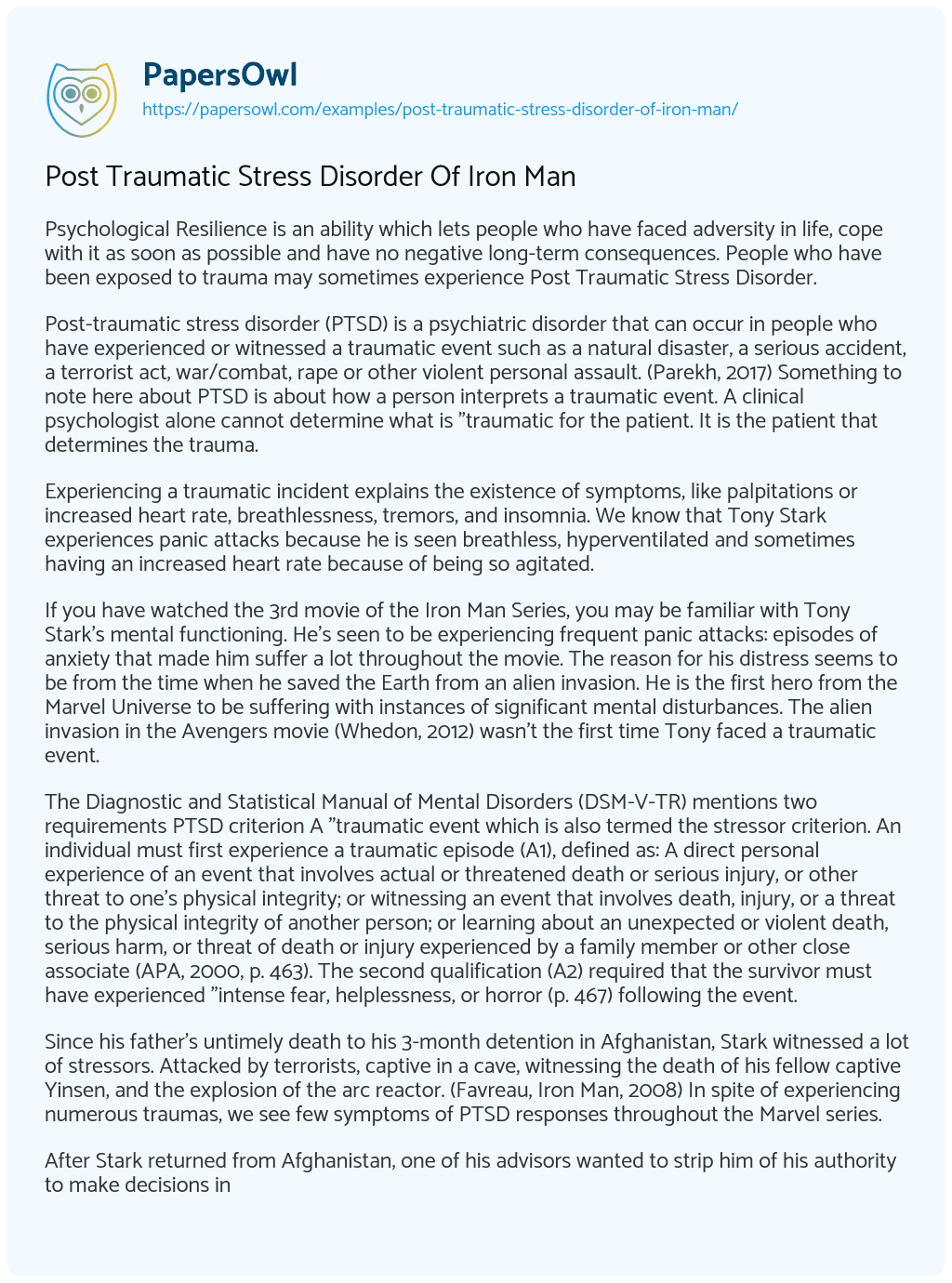 Psychological Resilience is an ability which lets people who have faced adversity in life, cope with it as soon as possible and have no negative long-term consequences. People who have been exposed to trauma may sometimes experience Post Traumatic Stress Disorder.

Post-traumatic stress disorder (PTSD) is a psychiatric disorder that can occur in people who have experienced or witnessed a traumatic event such as a natural disaster, a serious accident, a terrorist act, war/combat, rape or other violent personal assault. (Parekh, 2017) Something to note here about PTSD is about how a person interprets a traumatic event. A clinical psychologist alone cannot determine what is “traumatic for the patient. It is the patient that determines the trauma.

Experiencing a traumatic incident explains the existence of symptoms, like palpitations or increased heart rate, breathlessness, tremors, and insomnia. We know that Tony Stark experiences panic attacks because he is seen breathless, hyperventilated and sometimes having an increased heart rate because of being so agitated.

If you have watched the 3rd movie of the Iron Man Series, you may be familiar with Tony Stark’s mental functioning. He’s seen to be experiencing frequent panic attacks: episodes of anxiety that made him suffer a lot throughout the movie. The reason for his distress seems to be from the time when he saved the Earth from an alien invasion. He is the first hero from the Marvel Universe to be suffering with instances of significant mental disturbances. The alien invasion in the Avengers movie (Whedon, 2012) wasn’t the first time Tony faced a traumatic event.

The Diagnostic and Statistical Manual of Mental Disorders (DSM-V-TR) mentions two requirements PTSD criterion A “traumatic event which is also termed the stressor criterion. An individual must first experience a traumatic episode (A1), defined as: A direct personal experience of an event that involves actual or threatened death or serious injury, or other threat to one’s physical integrity; or witnessing an event that involves death, injury, or a threat to the physical integrity of another person; or learning about an unexpected or violent death, serious harm, or threat of death or injury experienced by a family member or other close associate (APA, 2000, p. 463). The second qualification (A2) required that the survivor must have experienced “intense fear, helplessness, or horror (p. 467) following the event.

Since his father’s untimely death to his 3-month detention in Afghanistan, Stark witnessed a lot of stressors. Attacked by terrorists, captive in a cave, witnessing the death of his fellow captive Yinsen, and the explosion of the arc reactor. (Favreau, Iron Man, 2008) In spite of experiencing numerous traumas, we see few symptoms of PTSD responses throughout the Marvel series.

After Stark returned from Afghanistan, one of his advisors wanted to strip him of his authority to make decisions in Stark Industries by issuing an order based on Tony being mentally ill. However, Tony remained strangely engaged with Stark Industries and mentally sane while experiencing a terminal medical crisis. Tony was considered by S.H.I.E.L.D. to be a “self-destructive, narcissistic and compulsive individual (Favreau, Iron Man 2, 2010).

A particularly important and distinguishing characteristic of PTSD is “functional impairment which can be assessed in social, mental and professional areas. We can clearly see that the panic attacks, the disturbing experiences of trauma, and insomnia are affecting Starks’s social relationships with Rhodey and Pepper Potts.

Someone suffering with PTSD has symptoms that fall into three groups: avoidance; abstain from thinking or discussing anything linked to the trauma, hyper-arousal; having trouble sleeping, and recollections; such as disturbing thoughts, nightmares, and flashbacks. When the film begins, Stark mentions that he was awake for 3 days working on his suit which showcases his hyper-arousal. He looks to escape circumstances where he might be reminded of the trauma which shows avoidance. Stark might be having flashbacks in his dreams, which could possibly be what keeps him awake for days at a stretch which relates to recollection and avoidance, respectively. (Black, 2013)

The end of the movie shows a metal gadget from Starks’s chest is removed. After the surgery Stark declares that the last night is “the best sleep I’ve had in years” suggesting that he has successfully conquered the symbol of imminent threat, and hence frees himself from his own psychological imprisonment which displays that he has bounced back stronger than ever; in other words, Psychological Resilience.

We will never find out if Iron Man has had PTSD or has ever been psychologically disturbed because he is an imaginary superhero and everything that happens to him is a work of fiction. Starting from themes such as medical trauma, terrorism, interpersonal conflict and combat, Iron Man has experienced it all. It is an undeniable factor that Tony has encountered some of the most realistic threats and dangers in the world of Marvel till date.

My Research on Post-Traumatic Stress Disorder