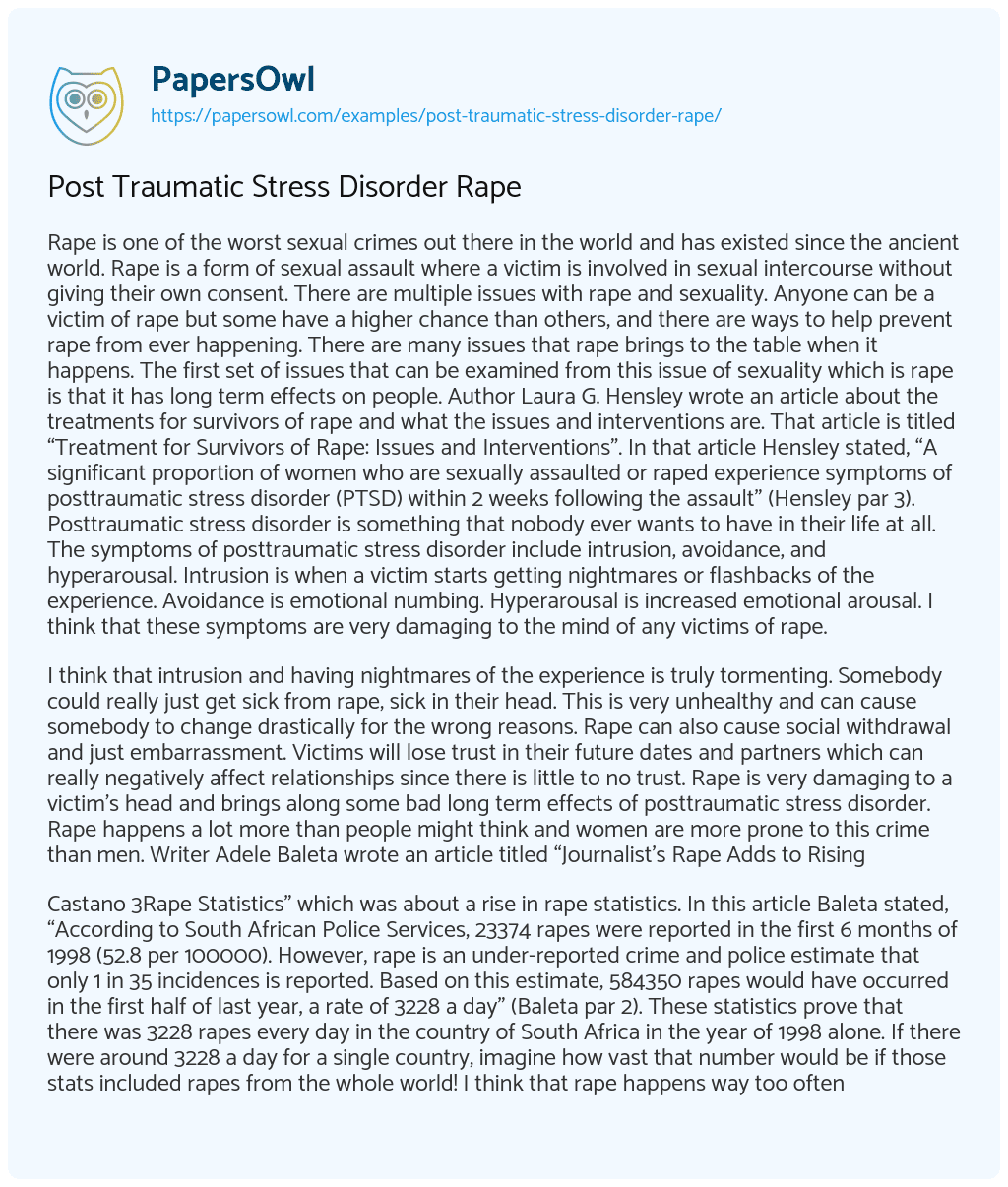 Rape is one of the worst sexual crimes out there in the world and has existed since the ancient world. Rape is a form of sexual assault where a victim is involved in sexual intercourse without giving their own consent. There are multiple issues with rape and sexuality. Anyone can be a victim of rape but some have a higher chance than others, and there are ways to help prevent rape from ever happening. There are many issues that rape brings to the table when it happens. The first set of issues that can be examined from this issue of sexuality which is rape is that it has long term effects on people. Author Laura G. Hensley wrote an article about the treatments for survivors of rape and what the issues and interventions are. That article is titled “Treatment for Survivors of Rape: Issues and Interventions”. In that article Hensley stated, “A significant proportion of women who are sexually assaulted or raped experience symptoms of posttraumatic stress disorder (PTSD) within 2 weeks following the assault” (Hensley par 3). Posttraumatic stress disorder is something that nobody ever wants to have in their life at all. The symptoms of posttraumatic stress disorder include intrusion, avoidance, and hyperarousal. Intrusion is when a victim starts getting nightmares or flashbacks of the experience. Avoidance is emotional numbing. Hyperarousal is increased emotional arousal. I think that these symptoms are very damaging to the mind of any victims of rape.

I think that intrusion and having nightmares of the experience is truly tormenting. Somebody could really just get sick from rape, sick in their head. This is very unhealthy and can cause somebody to change drastically for the wrong reasons. Rape can also cause social withdrawal and just embarrassment. Victims will lose trust in their future dates and partners which can really negatively affect relationships since there is little to no trust. Rape is very damaging to a victim’s head and brings along some bad long term effects of posttraumatic stress disorder. Rape happens a lot more than people might think and women are more prone to this crime than men. Writer Adele Baleta wrote an article titled “Journalist’s Rape Adds to Rising

Castano 3Rape Statistics” which was about a rise in rape statistics. In this article Baleta stated, “According to South African Police Services, 23374 rapes were reported in the first 6 months of 1998 (52.8 per 100000). However, rape is an under-reported crime and police estimate that only 1 in 35 incidences is reported. Based on this estimate, 584350 rapes would have occurred in the first half of last year, a rate of 3228 a day” (Baleta par 2). These statistics prove that there was 3228 rapes every day in the country of South Africa in the year of 1998 alone. If there were around 3228 a day for a single country, imagine how vast that number would be if those stats included rapes from the whole world! I think that rape happens way too often in the world.

Most of the victims of rape are women. Ever one in six women will report being raped while every one in thirty-three men will report being raped. Men are usually the rapists who like to commit the crime on women. The majority of victims of rape are women because women are naturally less strong than men, but some women can become stronger, so they are easier to prey on. That is my opinion. I also think that they are targeted more often for rape because usually girls focus on their looks and like to look pretty, so men like what they see and decide to get what they want in force.

Not every man will rape, but it is usually a man who does rape rather than a women. Even if a woman wanted to rape a man, the man would most likely be stronger than the woman and should be able to defend himself successfully unless the woman uses some tools to help. This requires much more effort and I don’t think that it is any easier than a man trying to rape a female. Rape happens very often and it occurs mostly to women. There are several ways to help avoid or prevent rape from ever happening which should help everyone if it ever comes down to that. Rape happens usually with acquaintances and strangers. It is most likely to get raped in private. Authors Nicole Bedera and Kristjane Nordmeyer wrote an article about some useful tips to avoid being raped which was titled “Never Go Out Alone’: An Analysis of College Rape Prevention Tips”. In this article, Bedeera and Nordmeyer mentioned, “ ‘Avoid being alone,’ and ‘Don’t walk alone at night.’ Both of these tips

Castano 4offer no acceptable exceptions to their proposed rule and they were often followed with more specific scenarios in which solitude is even more dangerous” (Bedera 539). Bedera and Nordmeyer offer great tips in this statement which are to not be alone and to walk with a friend at night. Being alone makes anyone an easy target for any crime.

A woman walking alone at night becomes a huge target for a rape to occur that night. To help avoid any rape people should: never be alone, go to a public place if it is a date, keep a phone nearby to dial nine-one-one, and learn how self defense. Never being alone also means never being alone with a person that he or she is dating for the first time and not being alone at all. Going to a public place allows for witnesses if anything might happen and pretty much negates any attempts of rape that an individual might go for since rape done in public is bad for the rapist as he would get caught. Keeping a phone nearby helps in calling for help as fast as possible. Learning self defense helps defend against a rapist if they aren’t drugging the victim. I think that everyone should learn how to avoid rape since it would be very helpful in reducing the amount of rapes that happen every day.

Rape can be prevented by several different methods that can help anyone from being raped in the first place. I do have an opinion of rape. I think that rape is completely wrong to do in every aspect. Rape is also very disgusting and disrespectful. I think that people should be taught better on how to avoid rape, why it is wrong, the consequences, and the damage it does. I feel that people just don’t care and are so selfish nowadays. In South Africa, 3228 rapes happened almost every day in the year 1998! Rape victims should tell the police about a rape that happened to them immediately so that way rapists will hopefully learn their lesson and stop the rapes. I also think that victims of rape should forgive the rapists that raped them. It may be hard but it will show how the world has some good people and show who the rapist should become. The rapist should

Castano 5take the forgiveness and turn it into a road that will bring him or her to follow that example of forgiveness and turn them into a better person, even if it is a minor change. Forgiveness is very powerful and can bring people together for the better. People should treat others the way they want to be treated even if some people do not follow that rule. I truly do feel that rape is a huge problem in sexuality since it forces sex on someone who may not have wanted it, could steal a virgin’s virginity, and cause many psychological damage to the mind. Rape is a very messed up issue in the world and has been a thing for centuries. Rape has many problems and anyone can be damaged, but there are some solutions. Rape is a terrible crime and is morally wrong as well. It should always be reported. Rape causes PTSD on victims and can scar a person for life. Rape should never happen, but it should also be forgive.