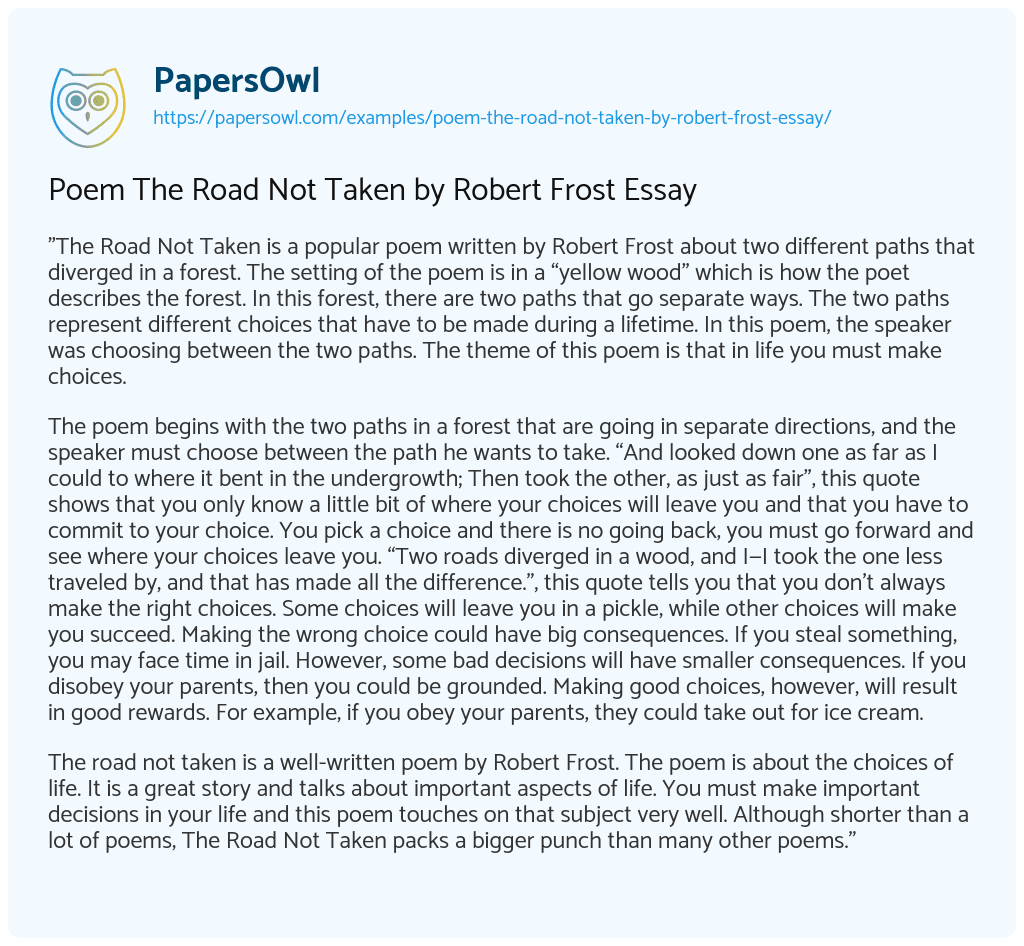 “The Road Not Taken is a popular poem written by Robert Frost about two different paths that diverged in a forest. The setting of the poem is in a “yellow wood” which is how the poet describes the forest. In this forest, there are two paths that go separate ways. The two paths represent different choices that have to be made during a lifetime. In this poem, the speaker was choosing between the two paths. The theme of this poem is that in life you must make choices.

The poem begins with the two paths in a forest that are going in separate directions, and the speaker must choose between the path he wants to take. “And looked down one as far as I could to where it bent in the undergrowth; Then took the other, as just as fair”, this quote shows that you only know a little bit of where your choices will leave you and that you have to commit to your choice. You pick a choice and there is no going back, you must go forward and see where your choices leave you. “Two roads diverged in a wood, and I—I took the one less traveled by, and that has made all the difference.”, this quote tells you that you don’t always make the right choices. Some choices will leave you in a pickle, while other choices will make you succeed. Making the wrong choice could have big consequences. If you steal something, you may face time in jail. However, some bad decisions will have smaller consequences. If you disobey your parents, then you could be grounded. Making good choices, however, will result in good rewards. For example, if you obey your parents, they could take out for ice cream.

The road not taken is a well-written poem by Robert Frost. The poem is about the choices of life. It is a great story and talks about important aspects of life. You must make important decisions in your life and this poem touches on that subject very well. Although shorter than a lot of poems, The Road Not Taken packs a bigger punch than many other poems.”

Poem The Road Not Taken by Robert Frost Essay. (2021, Apr 24). Retrieved from https://papersowl.com/examples/poem-the-road-not-taken-by-robert-frost-essay/