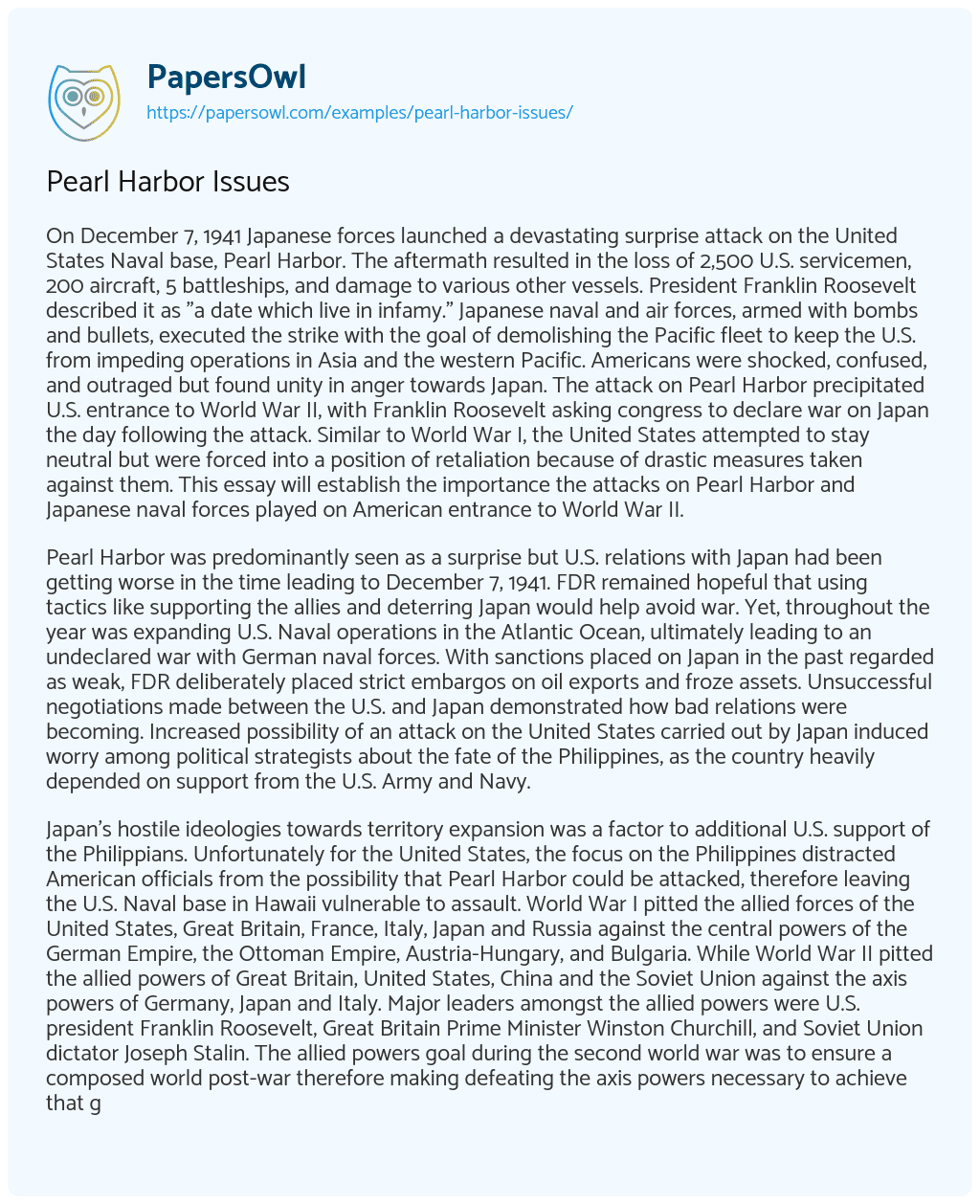 On December 7, 1941 Japanese forces launched a devastating surprise attack on the United States Naval base, Pearl Harbor. The aftermath resulted in the loss of 2,500 U.S. servicemen, 200 aircraft, 5 battleships, and damage to various other vessels. President Franklin Roosevelt described it as “a date which live in infamy.” Japanese naval and air forces, armed with bombs and bullets, executed the strike with the goal of demolishing the Pacific fleet to keep the U.S. from impeding operations in Asia and the western Pacific. Americans were shocked, confused, and outraged but found unity in anger towards Japan. The attack on Pearl Harbor precipitated U.S. entrance to World War II, with Franklin Roosevelt asking congress to declare war on Japan the day following the attack. Similar to World War I, the United States attempted to stay neutral but were forced into a position of retaliation because of drastic measures taken against them. This essay will establish the importance the attacks on Pearl Harbor and Japanese naval forces played on American entrance to World War II.

Pearl Harbor was predominantly seen as a surprise but U.S. relations with Japan had been getting worse in the time leading to December 7, 1941. FDR remained hopeful that using tactics like supporting the allies and deterring Japan would help avoid war. Yet, throughout the year was expanding U.S. Naval operations in the Atlantic Ocean, ultimately leading to an undeclared war with German naval forces. With sanctions placed on Japan in the past regarded as weak, FDR deliberately placed strict embargos on oil exports and froze assets. Unsuccessful negotiations made between the U.S. and Japan demonstrated how bad relations were becoming. Increased possibility of an attack on the United States carried out by Japan induced worry among political strategists about the fate of the Philippines, as the country heavily depended on support from the U.S. Army and Navy.

Japan’s hostile ideologies towards territory expansion was a factor to additional U.S. support of the Philippians. Unfortunately for the United States, the focus on the Philippines distracted American officials from the possibility that Pearl Harbor could be attacked, therefore leaving the U.S. Naval base in Hawaii vulnerable to assault. World War I pitted the allied forces of the United States, Great Britain, France, Italy, Japan and Russia against the central powers of the German Empire, the Ottoman Empire, Austria-Hungary, and Bulgaria. While World War II pitted the allied powers of Great Britain, United States, China and the Soviet Union against the axis powers of Germany, Japan and Italy. Major leaders amongst the allied powers were U.S. president Franklin Roosevelt, Great Britain Prime Minister Winston Churchill, and Soviet Union dictator Joseph Stalin. The allied powers goal during the second world war was to ensure a composed world post-war therefore making defeating the axis powers necessary to achieve that goal.

Although there were different ideas of what the world should look like post-war, it was generally agreed that actions needed to be taken that would prevent Germany from rising again. The axis power major leaders included German dictator Adolf Hitler, Italian Prime Minister Benito Mussolini, and Emperor of Japan Hirohito. Goals of the axis powers pertained to a new world order in which territory expansion was a key element in this goal. World War II could be called somewhat of a continuance of issues faced in World War 1, specifically, naval battle and the Germans carrying on with their U-boat efforts. The League of Nations was created after World War I in an attempt to make sure conflict of that magnitude never happened again. This attempt was obviously unsuccessful and ultimately contributed to the start of World War II.

The Japanese Navy was astoundingly successful in attacks against the allied powers. The United States believed that Japan’s Navy was second-class and vastly underestimated its capabilities. These uninformed views were quickly altered after the Pearl Harbor attack. Japan forces continued bulldozing through the Pacific, seizing smaller countries as it went. British and other allied forces were unable to impede the Japanese Navy from their forceful territory conquest. “Fanning out from military bases in the central Pacific, the Japanese seized Guam and Wake Island and moved south toward Australia through New Britain and New Guinea and the Solomons to the east.” (Millett 375). Japan continued to outmatch American Naval forces and eventually saw the fall of the Philippians. This incident was distressing for the U.S. given their past military collaborations.

The crushing impact Japan had to the United States during this time can be perfectly summed up in this quote from For The Common Defense, “From the Sunday-morning attack on Pearl Harbor (December 7, 1940) until the naval victory in the Battle of Midway (June 4-5, 1942), the United States saw its armed forces in the Pacific reel from one defeat to another as the Japanese conducted an Asian version of Blitzkrieg and seized every one of their planned objectives at minimal cost and almost exactly according to schedule.” In response to unfortunate news in the Pacific, FDR marshalled a plan to build the fundamental strategic, diplomatic, and political foundations for an allied powers total victory. With the goals of the allied powers in mind, FDR worked with Winston Churchill on a visionary document, that identified fascism as a threat to all mankind, known as the Atlantic Charter. The U.S. president was adamant in taking action that verified the allied powers were fighting for human rights. “In January 1942, [FDR] persuaded the British, Russians, and Chinese to sign the declaration of the United Nations, a statement that pledged the Allies to pursue total victory to the limits of their means in order “to defend life, liberty, and religious freedom, and to preserve human rights and justice in their own lands as well as in other lands. “