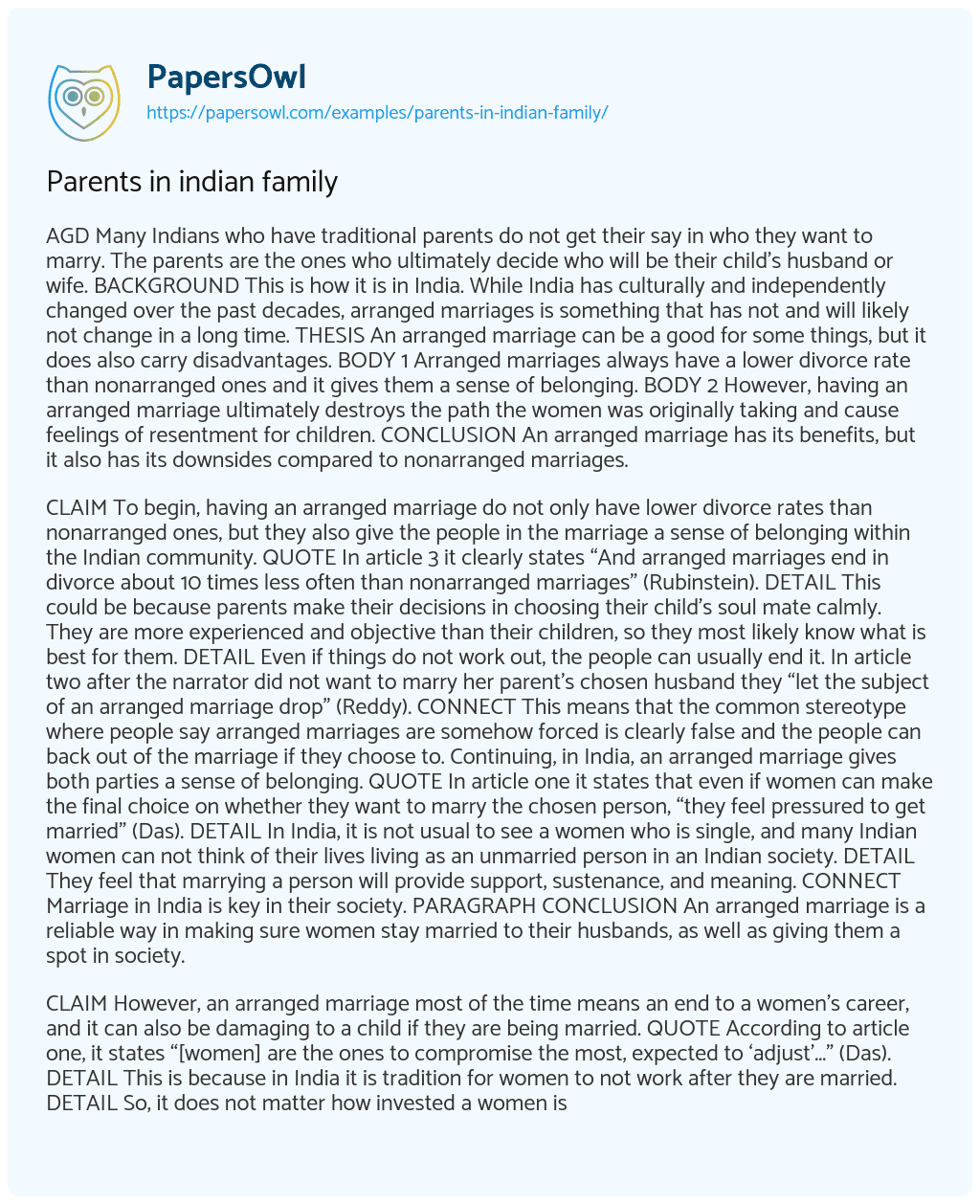 AGD Many Indians who have traditional parents do not get their say in who they want to marry. The parents are the ones who ultimately decide who will be their child’s husband or wife. BACKGROUND This is how it is in India. While India has culturally and independently changed over the past decades, arranged marriages is something that has not and will likely not change in a long time. THESIS An arranged marriage can be a good for some things, but it does also carry disadvantages. BODY 1 Arranged marriages always have a lower divorce rate than nonarranged ones and it gives them a sense of belonging. BODY 2 However, having an arranged marriage ultimately destroys the path the women was originally taking and cause feelings of resentment for children. CONCLUSION An arranged marriage has its benefits, but it also has its downsides compared to nonarranged marriages.

CLAIM To begin, having an arranged marriage do not only have lower divorce rates than nonarranged ones, but they also give the people in the marriage a sense of belonging within the Indian community. QUOTE In article 3 it clearly states “And arranged marriages end in divorce about 10 times less often than nonarranged marriages” (Rubinstein). DETAIL This could be because parents make their decisions in choosing their child’s soul mate calmly. They are more experienced and objective than their children, so they most likely know what is best for them. DETAIL Even if things do not work out, the people can usually end it. In article two after the narrator did not want to marry her parent’s chosen husband they “let the subject of an arranged marriage drop” (Reddy). CONNECT This means that the common stereotype where people say arranged marriages are somehow forced is clearly false and the people can back out of the marriage if they choose to. Continuing, in India, an arranged marriage gives both parties a sense of belonging. QUOTE In article one it states that even if women can make the final choice on whether they want to marry the chosen person, “they feel pressured to get married” (Das). DETAIL In India, it is not usual to see a women who is single, and many Indian women can not think of their lives living as an unmarried person in an Indian society. DETAIL They feel that marrying a person will provide support, sustenance, and meaning. CONNECT Marriage in India is key in their society. PARAGRAPH CONCLUSION An arranged marriage is a reliable way in making sure women stay married to their husbands, as well as giving them a spot in society.

CLAIM However, an arranged marriage most of the time means an end to a women’s career, and it can also be damaging to a child if they are being married. QUOTE According to article one, it states “[women] are the ones to compromise the most, expected to ‘adjust’…” (Das). DETAIL This is because in India it is tradition for women to not work after they are married. DETAIL So, it does not matter how invested a women is in their career, once they get married, which most women do, they are forced to leave their jobs. Furthermore, if children have an arranged marriage, it does not end up well sometimes. QUOTE Article three says that “But for children, arranged marriages can cause fear and resentment” (Rubinstein). DETAIL This is often because younger people want to have the chance to find their own soul mate. DETAIL They want to experience intimacy with that person before they make a lifelong commitment to them. Parents want to have the best intentions for their kids, but it does not always turn out as intended. CONNECT Most people in an arranged marriage are allowed to back out if they wish, but some traditional parents expect that their word is final, meaning some can not bail. PARAGRAPH CONCLUSION Just like how it has advantages, arranged marriages also has disadvantages.

THESIS All in all, arranged marriages provide good and bad things.BODY 1 Women can finally feel like they belong in their society. They also have longer marriages with lower divorce rates than non arranged ones.BODY 2 But, it often ends a women’s dream of pursuing a career. Not only that, but for some kids who have arranged marriages, it can affect them mentally and produce feelings of resentment and fear to them. Although India has changed a lot, arranged marriages have not. PARAGRAPH CONCLUSION Arranged marriages is a crucial topic that have many wondering if it is good or bad.