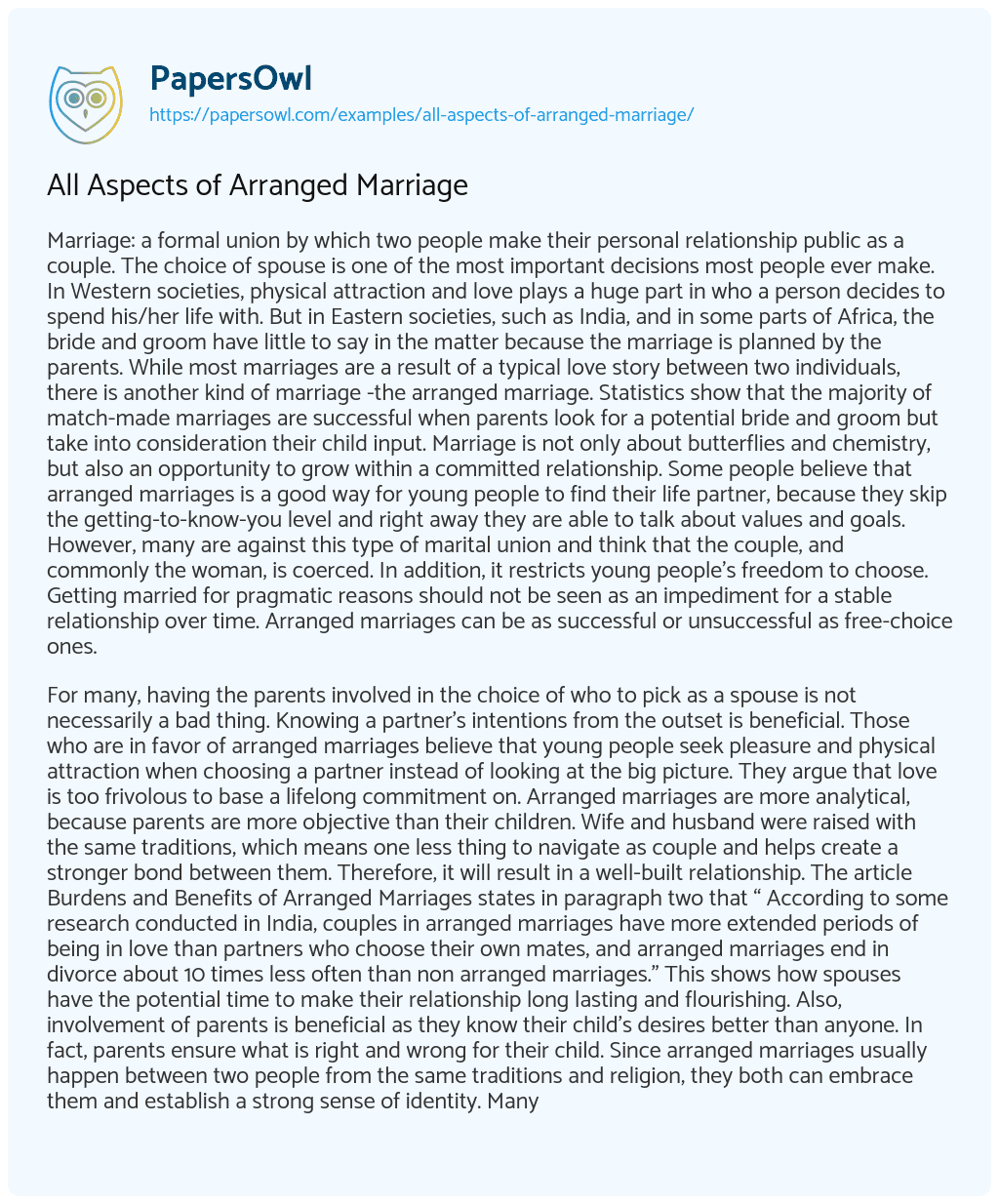 Marriage: a formal union by which two people make their personal relationship public as a couple. The choice of spouse is one of the most important decisions most people ever make. In Western societies, physical attraction and love plays a huge part in who a person decides to spend his/her life with. But in Eastern societies, such as India, and in some parts of Africa, the bride and groom have little to say in the matter because the marriage is planned by the parents. While most marriages are a result of a typical love story between two individuals, there is another kind of marriage -the arranged marriage. Statistics show that the majority of match-made marriages are successful when parents look for a potential bride and groom but take into consideration their child input. Marriage is not only about butterflies and chemistry, but also an opportunity to grow within a committed relationship. Some people believe that arranged marriages is a good way for young people to find their life partner, because they skip the getting-to-know-you level and right away they are able to talk about values and goals. However, many are against this type of marital union and think that the couple, and commonly the woman, is coerced. In addition, it restricts young people’s freedom to choose. Getting married for pragmatic reasons should not be seen as an impediment for a stable relationship over time. Arranged marriages can be as successful or unsuccessful as free-choice ones.

For many, having the parents involved in the choice of who to pick as a spouse is not necessarily a bad thing. Knowing a partner’s intentions from the outset is beneficial. Those who are in favor of arranged marriages believe that young people seek pleasure and physical attraction when choosing a partner instead of looking at the big picture. They argue that love is too frivolous to base a lifelong commitment on. Arranged marriages are more analytical, because parents are more objective than their children. Wife and husband were raised with the same traditions, which means one less thing to navigate as couple and helps create a stronger bond between them. Therefore, it will result in a well-built relationship. The article Burdens and Benefits of Arranged Marriages states in paragraph two that “ According to some research conducted in India, couples in arranged marriages have more extended periods of being in love than partners who choose their own mates, and arranged marriages end in divorce about 10 times less often than non arranged marriages.” This shows how spouses have the potential time to make their relationship long lasting and flourishing. Also, involvement of parents is beneficial as they know their child’s desires better than anyone. In fact, parents ensure what is right and wrong for their child. Since arranged marriages usually happen between two people from the same traditions and religion, they both can embrace them and establish a strong sense of identity. Many parents arrange marriages for their children so they can find a son-in-law or a daughter-in-law who shares the same background and practices the same religion.

Arranged marriage do not let young people choose whom they’d marry. This can make them feel hopeless if they end up marrying someone they do not like. Although the motivation in arranged marriages is supposed to be the happiness of the son or daughter, the truth is that parents will often exert huge pressure on their child to marry the person they have chosen, because they are more experienced and know best. Even if the soon to be newlyweds accept the choice, they can feel like they do not have any control about their life and future. In the passage India has changed a lot in 70 years. But arranged marriage remains the norm by Kavita Das, it explains how “You lose your identity when you get married, and that’s something most people never want to do.” After marriage, women are expected to move cities, leave their families, stop working, etc., which can result in a hard time adjusting. Also, not getting married can be seen as a disrespect towards your religion. For the children, knowing what can happen if they do not carry through with the marriage, causes fear and resentment on one of the most special days of their lives. Some parents find prospective mates based on the wealth. Two people who barely know each other cannot make such an important decision that will affect their joint future. The spouses may not be forced into marriage, but pressure from their parents sometimes makes them feel like it. Even if two people come from the same race, religion, and culture, there is still a chance that they will not get along well, especially if their personalities clash.

Arranged marriage has paved the way to many couples who eventually fall in love with each other and build a happy and satisfying relationship. However, other arranged marriages end up in failed relationships and the spouses are stuck with their miserable marriage for the rest of their lives. Since a man and a woman are paired by their parents or older family members with marriage in mind, they do not have to worry if the relationship will end in matrimony or not (because it most likely will).

All Aspects of Arranged Marriage. (2021, Jul 01). Retrieved from https://papersowl.com/examples/all-aspects-of-arranged-marriage/

Love Marriage and Arranged Marriage: from Business to Affection